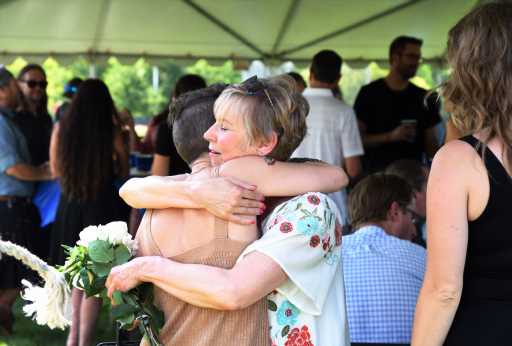 Johnny Hurley was a man of action, those who knew him say, never sitting back and waiting on others — whether it was planning a camping trip, retrofitting an airport shuttle bus into an arcade, or running toward a man hellbent on killing police officers in a town plaza.

It was the latter action that cost Hurley his life in Olde Town Arvada on June 21. On Tuesday, his family and friends gathered to tell stories, eat and drink, and play video games in celebration of Hurley’s life.

Multiple friends described Hurley as a man of principle, and although they wished the outcome that day in Olde Town was different, they understood why their friend rushed to confront a shooter who had just ambushed and killed Arvada police Officer Gordon Beesley.

“If you really want to change things, you’ve got to be an example,” friend Law Johnston said. “He’s one of those guys you need around in your life. He’s such a good guy. He became a legend on that sad and fateful day.”

Hurley was shot by an Arvada police officer who was responding to the shooting. The 40-year-old had been shopping in the Arvada Army Navy Surplus store in preparation for a family camping trip when gunshots rang out. He carried a concealed weapon, so he drew his handgun and ran toward the shooting.

He killed the gunman, who investigators have said had threatened to kill as many officers as possible, and police hailed Hurley as a “good Samaritan” and a hero.

Separate investigations into the killing of Beesley and the police shooting of Hurley remain ongoing.

On Tuesday, the Hurley family held a two-hour memorial service at the Arvada Center for the Arts and Humanities and then gathered for a picnic at Robby Ferrufino Park for tacos, pasta, beer, music, video games and even fortune-telling.

They shared memories of Hurley’s life, including how he passionately embraced controversial ideas.

He sometimes disagreed with his loved ones, especially his father, who served as a career U.S. diplomat. The two finally learned to “agree to disagree” on topics such as gun control, and “it was very important for us because we were able to grow from there,” his father, Michael J. Hurley, said.

Michael Hurley had planned to go on a camping trip this week with his children Johnny and Erin Hurley. Instead, he attended his son’s memorial service.

Andy O’Connell brought OC Entertainment’s Retro Cave — an old Denver International Airport shuttle bus that he and Hurley transformed into a mobile arcade with vintage video games such as “Ms. Pacman,” “Mortal Kombat II” and Atari’s “Star Wars.” O’Connell said he bought the bus in 2020 with the dream of turning it into an arcade, but the coronavirus pandemic tanked the plans.

But this past spring, Hurley motivated him to finish it. Together, they wired the bus for the games and Hurley even sewed curtains. Now, the bus is a successful small business and O’Connell is thankful his friend pushed him to do it.

“He loved working with his hands and helping people accomplish things,” O’Connell said. “He would just not let me be lazy or put it off. He helped me do everything.”

Erin Hurley stood inside the arcade bus, picking out music that her brother would approve of.

The two were close, bonding over video games, camping and whiskey.

Losing her brother has been devastating, and Erin Hurley tells everyone she meets to call their families and tell them how much they are loved. Tomorrow is not promised, she said.

The last time they talked, Johnny Hurley questioned his sister about why she bragged about him so much.

“He said, ‘I don’t know why you put me on this pedestal. I’m just a normal guy. I’m just your big brother,’” Erin Hurley said. “My response was, ‘Being my big brother is all you have to be.”