EVGENY LEBEDEV: As a child of the USSR, I fear these pictures of Stalin show where Britain is heading…

There is a photograph taken in 1937 which shows Stalin walking along the Moscow canal with three lieutenants.

Yet in a version issued 12 months later, only two can be seen. The missing man is Nikolai Yezhov, a Soviet commissar who, executed in a purge, had vanished not just from office, but from the photo, too. Plucked from history by Stalin.

I left the USSR and came to Britain in 1988. When I did so, I left a country of censorship, conformism and authoritarianism for a free-thinking land of rules and democratic debate.

Now I fear this nation heading in the same direction as the one I left. The comparisons are clearly visible: a zealous revolutionary spirit, an egalitarian ideology and the desire to rewrite national myths.

After the November revolution, the Soviet Union set about erasing Tsarist history. Statues were toppled, books were burnt and the Romanovs themselves executed in 1918. Under Stalin, the new Soviet Tsar, newspapers were muzzled and critical voices were silenced. 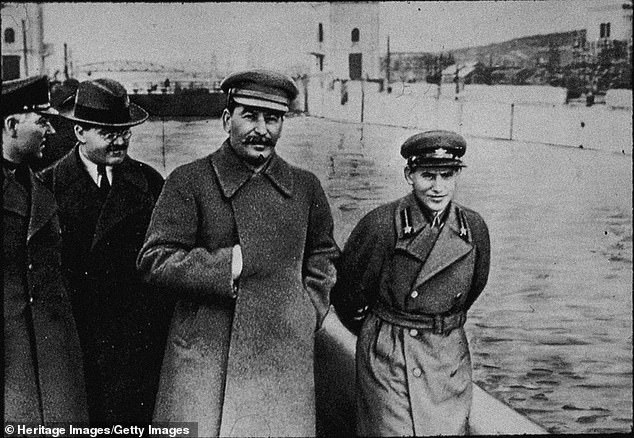 A photograph taken in 1937 which shows Stalin walking along the Moscow canal with three lieutenants, but was later doctored to edit out Nikolai Yezhov (seen on the right) 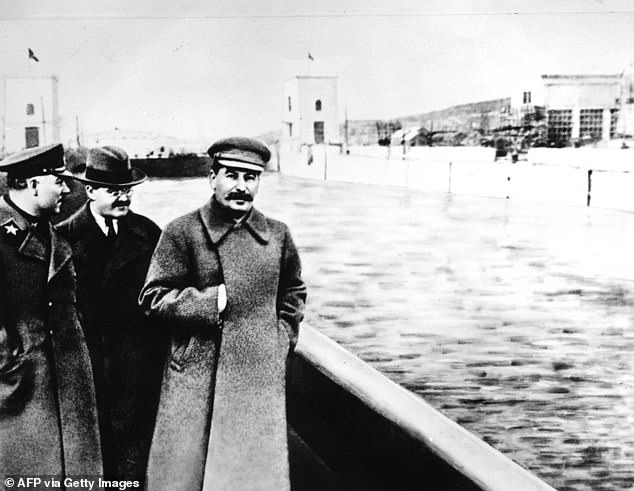 This image shows how the photo looked when later edited: Nikolai Yezhov, a Soviet commissar who, executed in a purge, had vanished not just from office, but from the photo, plucked from history by Stalin.

For ideologues, the ends justify the means – and history and culture are the most powerful tools of all. After Stalin’s death, his legacy was whitewashed and the regime attempted to erase much of his rule from the records.

For decades, we never knew the true extent of the gulags and the executions. In the 1991 revolution, history repeated itself. Statues were pulled down and places renamed.

The apartment block in which I grew up on Romanov Lane was targeted by protesters. The plaques immortalising its famous Soviet residents were vandalised with swastikas overnight.

Millions are not dying in labour camps or civil war in modern Britain, yet worrying echoes of the censorship and groupthink abound. And I’m sorry to say that Black Lives Matter, a laudable movement for racial equality, risks abolishing freedom of thought and democratic debate in a land that has traditionally been its defender.

Statues are pulled down and plaques are graffitied by people who will not rest until our public spaces are free of any reference to our complex history. Yesterday, we all saw the tragedy this has led to – the boarded-up statue of Sir Winston Churchill in Parliament Square and far-Right thugs patrolling the area spoiling for a fight. 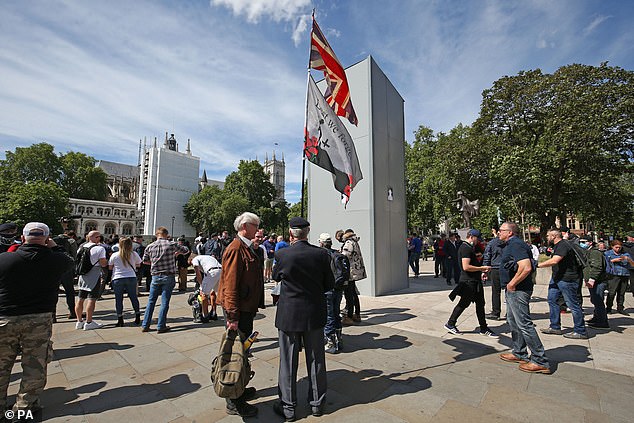 People stand next to the boarded up Churchill statue at Parliament Square in London on Saturday, will calls now increasing for the possible removal of the monument

In the eyes of Black Lives Matter protesters, Sir Robert Peel and William Gladstone are no longer reforming liberal premiers, but villains through association with their slave-owning family.

Our history is being rewritten before our eyes. Free individuals are forced to submit to the revolution. The pressure on individuals, organisations and brands to declare their support for a movement that aims to undermine British culture and history has been immense.

The removal of potentially offensive episodes of the comedies like Fawlty Towers and Little Britain from streaming platforms also demonstrates the one eternal truth of revolutions – zealots lack a sense of humour.

Lack of historical memory in modern Russia is serving to rehabilitate Stalin as a popular and strong leader, while the contributions of British military and civilian leaders are being distorted or overlooked.

Today’s heroes will be tomorrow’s villains. To admit the flaws in our public figures should not cover up the immense contributions people like Churchill and Gladstone have made and I have seen for myself the perils of whitewashing history.

I fear that in the breakneck pursuit of equality and justice, some of what made Britain truly great will be lost. Let the people go uncensored, let the children see the complex reality of our history and let the monuments to the memory of those who came before us stay up.

As a child of the Soviet Union I can tell you: the liberties you take for granted should be protected.