Manila: Vice President Kamala Harris will underscore America’s commitment to defending treaty ally the Philippines with a visit that started on Sunday and involves flying to an island province facing the disputed South China Sea, where Washington has accused China of bullying smaller claimant nations.

After attending the Asia-Pacific Economic Cooperation summit in Thailand, Harris flew on Sunday night to a red-carpet welcome in Manila. On Monday, she meets President Ferdinand Marcos jnr for talks aimed at reinforcing Washington’s oldest treaty alliance in Asia and strengthening economic ties, said a senior US administration official. 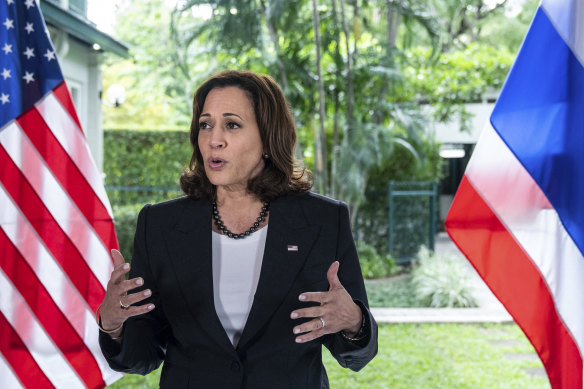 US Vice President Kamala Harris is heading to the disputed South China Sea.Credit:AP

Harris said her trip to Thailand was “quite successful” as she reiterated the US commitment to the region on Sunday afternoon at a roundtable discussion on climate change.

The panel of climate activists, civil society members and business leaders focused on clean energy and the threat climate change is posing to the Mekong River, which more than 60 million people in Southeast Asia use for food, water and transport. Harris announced the US plans to provide up to $US20 million in funding for clean energy in the region via the Japan-US Mekong Power Partnership.

Before her flight out, she stopped by a local market and perused a maze of shops, struck up conversations with shopkeepers and purchased Thai green curry paste.

On Tuesday she will fly to Palawan province, which lies along the South China Sea, to meet fishermen, villagers, officials and the coast guard. Once there, she’ll be the highest-ranking US leader to visit the frontier island at the forefront of the long-seething territorial disputes involving China, the Philippines, Vietnam, Malaysia, Brunei and Taiwan.

Harris will underscore the importance of international law, unimpeded commerce and freedom of navigation in the South China Sea, the US official said.

China can view the visit the way it wants, the official added in response to a question, but Washington’s message is that the US, as a member of the Indo-Pacific, is engaged and committed to the security of its allies in the region.

Philippine Ambassador to Washington Jose Manuel Romualdez said Harris’s trip to Palawan shows the level of America’s support to an ally and concern over China’s actions in the disputed sea.

“That’s as obvious as you can get, that the message they’re trying to impart to the Chinese is that ‘we support our allies like the Philippines on these disputed islands,‘” Romualdez told The Associated Press. “This visit is a significant step in showing how serious the United States views this situation now.”

Washington and Beijing have long been on a collision course in the contested waters. While the U.S. lays no claims to the strategic waterway, where an estimated $US5 trillion in global trade transits each year, it has said that freedom of navigation and overflight in the South China Sea is in America’s national interest.

China opposes US Navy and Air Force patrols in the busy waterway, which Beijing claims virtually in its entirety. It has warned Washington not to meddle in what it says is a purely Asian territorial conflict — which has become a delicate front-line in the US-China rivalry in the region and has long been feared as a potential flashpoint.