Paris: It has been a long centenary of a long war, and it is very, very hard to find something new to say about a conflict that ended 100 years ago today and has been endlessly (and rightfully) commemorated since.

But sometimes you don’t need to say anything to say everything.

In a clearing in a forest north of Paris, on Saturday, in cold, drizzling rain, the leaders of France and Germany held hands, and embraced, and even smiled. 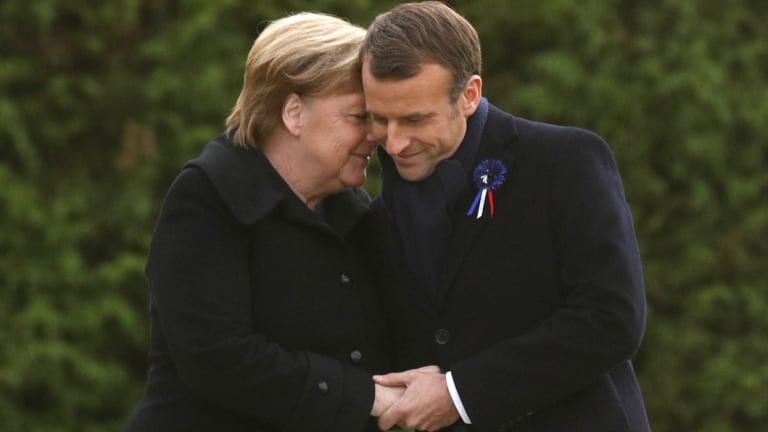 Emmanuel Macron and Angela Merkel unveil a plaque in the Clairiere of Rethondes during a commemoration ceremony for Armistice Day.Credit:AP

The pictures say it all. They say as many thousands of words as there were millions dead.

They say we can look forward with hope as well as backwards in horror. That despite our crazed limitations as warlike animals, there’s another side to our nature as well, that not only forgives but finds love.

I may be reading too much into a photo. Macron and Merkel are politicians, and very successful ones, in their very different ways. Their craft is one of messaging, not truth.

But messages aren’t nothing.

For four years now we have all been living through the centenaries of battles, moments in a terrible war that caused unimaginable pain and death.

We’ve heard, again, stories of sacrifice and loss and defeat, and victories too (though one person’s victory is always another’s defeat).

President Trump sent some messages on Saturday, too.

“Happy 243rd Birthday to our GREAT US Marine Corps,” he tweeted.

“Had very productive meetings and calls for our Country today. Meeting tonight with World Leaders!”

“Trying to STEAL two big elections in Florida! We are watching closely!”

He was in Paris, and had been expected at a ceremony at Aisne-Marne American Cemetery and Memorial, 85km east of Paris. 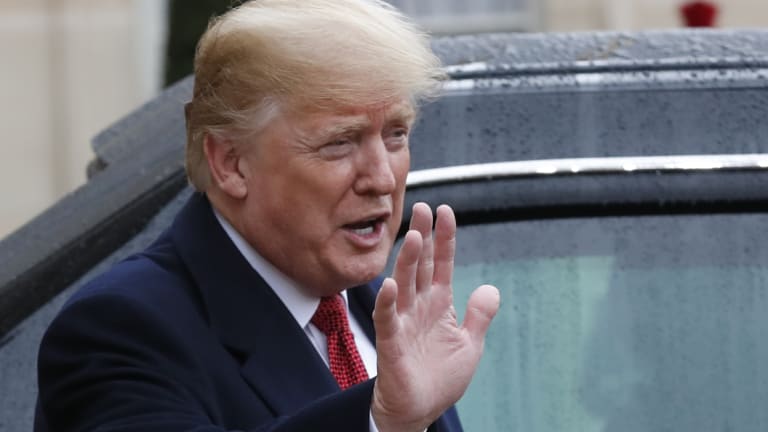 Donald Trump gestures outside the Elysee Palace after his talks with French President Emmanuel Macron.Credit:AP

The cemetery contains the graves of 2289 war dead, most of whom fought and died in the summer of 1918. Inscribed on its interior wall are 1060 names of the missing. A monument and flagpole commemorate the valour of US Marines who seized this ground from the Germans.

He didn’t go, the White House said, due to “scheduling and logistical difficulties caused by the weather”. Instead, it seems he stayed put in the US embassy.

Let’s be clear, this was standard European November drizzle. I literally walked through worse today to catch a bus.

Maybe helicopters can’t fly through that. I’m no helicopter expert. It seems remarkable there was no other option.

I’m also no expert in US politics, so I’ll leave it to others to decode this message. Because intentional or not, it was a message.

On Sunday a lot of international leaders will gather for the Armistice commemoration under the Arc de Triomphe. Their names are a reminder that war is not over, as if we needed a reminder.

Afterwards many will gather at a "Peace Forum" in Paris, intended to be a new annual event where world leaders will, it says here, “strive for a durable world peace”.

According to Reuters, on Sunday afternoon president Trump is scheduled to take part in a ceremony at the Suresnes American Cemetery to the west of Paris, when he is expected to make formal remarks.

And then he will fly home.