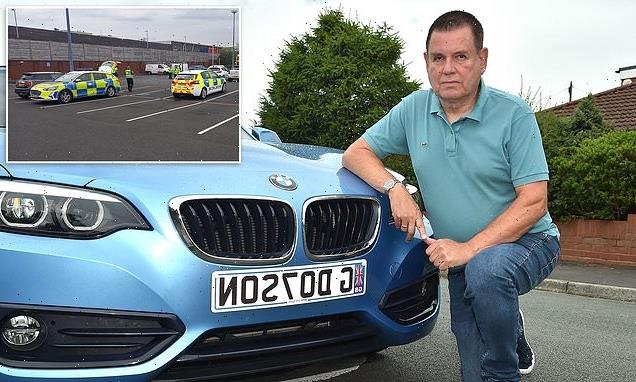 EXCLUSIVE: Drivers’ fury as six police cars and 12 officers are used to stop drivers over minor offences including one who was fined £100 for  his mis-spaced number plate

An assistant chief constable has been forced to defend his force’s tactics after six police cars and 12 officers were sent out to an operation which ended in someone getting a ticket over a mis-spaced number plate.

Former union official Glen Dyson, 66, of Lowton, Warrington, Cheshire, was stunned to discover the number plate he’s had for 12 years was illegal, even though he has had a speeding ticket in the past.

Officials failed to flag any problems to motorist Glen, and was appalled when his wife was handed a ticket for the ‘mis-spaced number plate on their BMW.

Glen had previously had a speeding ticket on the same blue convertible and the prosecution letter complete with details of the number plate landed on his mat at home.

The scene that laid before him included six police cars and 12 officers pulling drivers up on minor traffic issues – something he says looked like a ‘major crime incident’.

But Greater Manchester Police has defended the number of police cars and officers sent to the scene when Glen was stopped on Thursday 28 July as it was part of Operation Avro which ‘utilises specialist resources from across the force’. 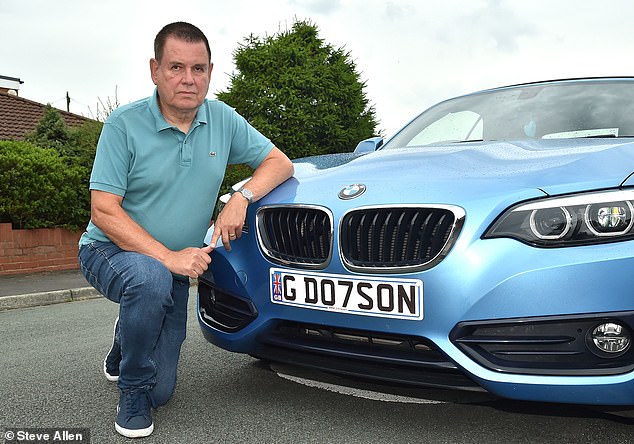 Former union official Glen Dyson, 66, of Lowton, Warrington, Cheshire, was stunned to discover the number plate he’s had for 12 years was illegal. His stop and fine by Greater Manchester Police was part of Operation Avro, which saw six police cars and 12 officers pulling drivers up on minor traffic issues – something he says looked like a ‘major crime incident’

Glen said: ‘When you look at the pictures taken around Spinning Jenny Way here in Leigh, you’d be expecting a major crime incident to be ongoing.

‘No that’s not the case, it’s a dozen plus officers pulling motorists for minor traffic issues and they have six police cars tied up doing this.

‘My car has had that number plate on it for 12 years – I’ve had a speeding ticket and been first on the scene of an accident speaking to three police officers and never once has it been highlighted as not legal.

‘We have all kinds of incidents, outside of office hours, when you simply cannot get a police officer to save your life.

‘Within the last year our local pub had an altercation and the police were called – they didn’t come.

‘Now in broad daylight, when burglars might be on the prowl, they are all gathered together in the one spot stopping motorists.

‘Is that really a sensible use of police personnel? I am not so sure it is.

‘We have a £100 ticket for a minor misdemeanour – back in the day a sensible police officer may have issued guidance to inform you that the number plate needs altering, but having said that I’ve had letters from the police about the car and no mention of the number plate being an issue.

‘In this day and age you’d hope they would have better things to do with crime rising as the cost of living crisis takes hold.

‘At the end of the day it’s a ticket and we won’t contest it. We are law-abiding motorists, fully taxed, insured and with an MOT, but we have been issued with a fine.

‘It’s not even something I would expect the police officers involved want to be doing when there are serious incidents happening all over the place.’

The couple’s number plate reads G D07SON and is apparently mis-spaced. The Dyson’s intend to pay the fine, but are keen to question the level of policing put into what are basically minor motoring matters.

Glen’s wife Karen, a retired estate agent, said: ‘It was afterwards that I was shaking about what had happened. 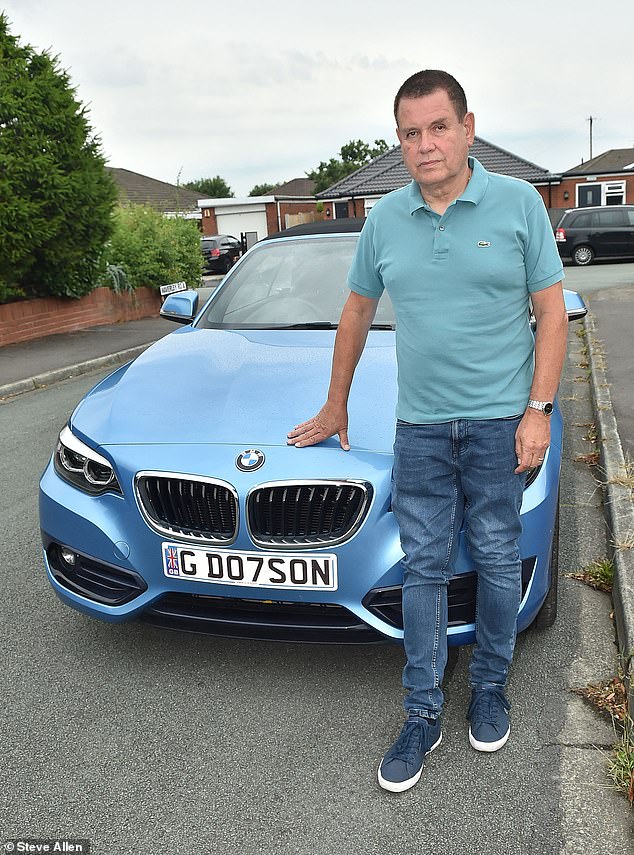 The couple’s number plate reads G D07SON (pictured) and is apparently mis-spaced. The Dyson’s intend to pay the fine, but are keen to question the level of policing put into what are basically minor motoring matters

‘I had no idea I had done anything wrong and we’ve had that registration on vehicles for 12 years. The policeman asked if I was Mrs Dobson, it was most odd.

‘You have to question the decision making that allows a dozen police officers or more to simply stop motorists in the middle of the day.

‘We have lodged a complaint with Greater Manchester Police about the use of their resources. We will pay the fine if this is an offence.’

GMP Assistant Chief Constable Wasim Chaudhry, said: ‘Greater Manchester Police is taking an increasingly proactive approach to fighting, preventing and reducing crime to make our region as safe as possible for those who live, work and travel within it.

‘Operation Avro, which was taking place in the Wigan and Leigh area on Thursday 28 July 2022, is just one example of that work and utilises specialist resources from across the force.

‘This includes, but is by no means limited to, officers from our Roads Policing Unit who have enhanced knowledge of the legislation and regulations relating to vehicles and, thus, a keener eye for identifying non-compliance.

‘This work can focus on the manner in which vehicles are driven, the condition they are kept in and documentation relating to the motorist. Officers seek to deal with situations in the most appropriate manner and, yesterday, nine vehicles ended up being seized and removed from our roads.

‘Greater Manchester Police has a responsibility to enforce the law. If anyone is unsure of the legislation and regulations which relate to vehicles, they should visit the Government’s website for advice: Displaying number plates: Rules for number plates – GOV.UK (www.gov.uk).’