The nice man who brought samples of the banoffee macaron to me and other customers one recent morning began, a few moments later, to gently buff the doors and windows of a new, rose-gold prototype car with a soft cloth. I could see this because the car and I were sharing a room on West 14th Street. The car was in the back and I was in the middle, sitting at one of the cafe tables near the stairs to the second floor, where there is a bar shaped like a wheel and a restaurant with a menu devised by Gregory Marchand, the chef of the Frenchie restaurants in Paris and London.

The employees in all of these rooms work for the Union Square Hospitality Group, which I suppose means that Danny Meyer, the group’s founder and one of the world’s best-known restaurateurs, is now also in the business of polishing automobiles. The whole operation is called Intersect by Lexus, which gives you a good idea who made the car and was paying to keep it shiny and free of dust.

Intersect by Lexus is one of those modern places where brands, instead of asking you to buy one of their products then and there, instead try to make you feel the kinds of emotions about the brand that may lead to a sale later on.

This is a job formerly performed by advertisements. In fact, Lexus used to publish a print magazine and mail it to its customers, back when that seemed like a good way to persuade people to have emotions about a car. Now we live in the age of the “branded experience.” A toilet-paper manufacturer will send you a wheeled toilet on demand. A mattress company will encourage you to sleep inside a roaming “napmobile.” Makers of a crunchy orange snack open restaurants, lasting just a few days, where chefs put the crunchy orange snack into meatballs, tacos, cheesecakes and everything else.

You cannot get Anne Burrell to sprinkle a Lexus over the top of your mac and cheese, however, and not just because the cheapest one costs $33,000 more than a bag of crunchy orange snacks. Intersect by Lexus takes a different approach, closer to that of A/D/O, a “creative hub” in Greenpoint, Brooklyn, owned by the car brand Mini. A/D/O offers temporary exhibitions, talks, performances, work spaces for designers and a sun-filled, roomy Scandinavian cafe whose kitchen was, for a time, overseen by the chef Fredrik Berselius and the restaurateur Claus Meyer. (Mr. Berselius is no longer involved.) 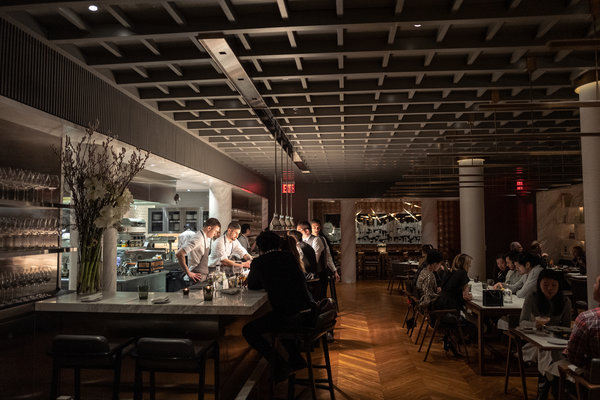 When I ate at the cafe, shortly after A/D/O opened, the food barely dented my consciousness, although I remember thinking that if I worked nearby I probably would drop in for lunch or a cortado. In the same way, if I find myself in the meatpacking district by day, I might join the Wi-Fi philosophers who occupy the spindle-backed chairs downstairs at Intersect, just so I could get a maple-bacon scone, a recipe imported from Frenchie to Go on the Rue du Nil in Paris.

On the other hand, I’d go well out of my way to eat upstairs at Intersect again. It’s not a restaurant in three dimensions — the service, while skilled, is a bit anonymous, and the interior is a hodgepodge of expensive, subtle design and bric-a-brac that might have been ordered from a catalog. But the food is some of the most engaging I’ve come across in the past few months, and it will go away after the end of March, when Mr. Marchand’s menu will be replaced by one devised by another chef from somewhere else in the world, chosen by representatives from Union Square Hospitality Group and Lexus. (A formal review, with stars, would be obsolete almost as soon as it was published.)

I’ve never made it to Frenchie or its branch in London. Many New York chefs have, however, and working my way through Mr. Marchand’s dishes at Intersect helped me understand what other restaurants around town have been trying to imitate: the charred leaves, the cooked grains, the gently swirling patterns that suggest the chef has been plating food on a turntable.

Grilled baby leek greens angled out around a pile of barley topped with what looked like a deviled egg. It was, in fact, a smoked and lemon-spiked yolk plopped in the center of some “whites” made of Parmesan sabayon. Spice and crunch came from puffed barley dusted with piment d’Espelette. It was just tricky enough, this dish. And I loved the way a caraway brioche, pickled mustard seeds and cucumbers completed the deli allusions begun by a foie gras terrine with layers of soft, smoky pastrami.

There was a very welcome spin on skate grenobloise in which the fish was replaced by creamy white halibut under a golden bread-crumb crust; sea beans extended the briny flavor of capers in the brown butter sauce. And if this all sounds a bit cerebral, the big, pillowy, pan-seared gnocchi with fried sweetbreads and veal-glazed mushrooms proved that Mr. Marchand knows the appeal of animal instincts.

What to make of those few dishes that did not come together — the pebbles of cauliflower under a layer of seeds and nuts that looked as if it had spilled from a bird feeder, or the lukewarm chocolate mousse at the bottom of a deep bowl? Was the problem Mr. Marchand’s recipes? The way the Union Square Hospitality kitchen crew, led by Nickolas Martinez, had carried them out? The local terroir?

Mr. Martinez and Dylan Shipsey, the general manager, say they want customers to feel as if they are walking into Frenchie in Paris. Intersect does not have the premodern limestone wall and ceiling timbers of the Rue du Nil, but Mr. Marchand tried to sprinkle some Right Bank pixie dust on West 14th Street by choosing the plates and bowls, consulting on flower arrangements and sharing his Spotify playlists.

Maybe those things help. But the dining room, by the design firm Wonderwall, mostly looks like money to me, apart from the shelves half-filled with coffee-table books, black crow figurines and other eerily generic knickknacks. At least somebody had the good sense to keep the car downstairs, by the restrooms, before it was rolled out last weekend to make room for another temporary exhibition. In what may not be a good sign for Lexus, nobody paid much attention to it when I was there, but somebody was always marveling about the toilets, the Japanese kind that seem to know exactly what you are going to do before you do.

The chef-in-residence conceit is not unique to Intersect. On Mulberry Street, Chefs Club also turns its permanent kitchen crew over to somebody else’s menu; a new restaurant in Houston, the Decatur Bar & Popup Factory, gives its entire space to prospective restaurateurs for three months at a time so they can test-drive their ideas before going out on their own.

The chefs of Contra, in Manhattan, and other restaurants sometimes turn over the menu to friends of theirs for a night or two. The most ambitious experiment in this vein may be In Situ, the restaurant inside the San Francisco Museum of Modern Art that on any given day faithfully reproduces a dozen or so dishes that are strongly identified with other restaurants around the world.

To understand the appeal for chefs of these pop-ups and residencies, think about the Instagram posts, the email-address caches, the preview news items, even the occasional reviews they generate. For a few months’ or even a few nights’ work, a restaurant can refresh its aura of newness and relevance. In an era that feeds on novelty, chefs who just keep plugging along can seem older than they really are.

The events make the host restaurant look cooler, too. (It’s been a while since Union Square Hospitality Group hired a chef who got menu analysts chattering the way Mr. Marchand does.) And of course, people who go to these dinners can boast about them on social media. It’s a big, beautiful marketing ecosystem in which everybody from predators to bottom feeders gets to believe they’re at the top of the food chain.

Pete Wells joined The New York Times as dining editor in 2006 and has been its restaurant critic since 2012. For three years, he wrote a column for The New York Times Magazine called “Cooking With Dexter.” EMAIL [email protected]