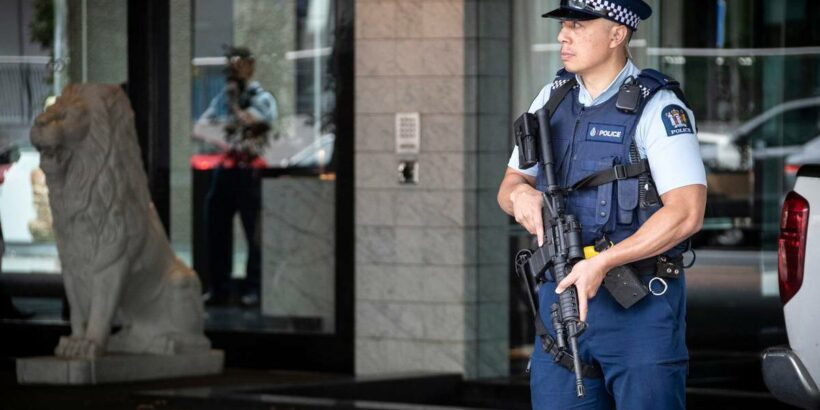 Police have this evening made a second arrest in relation to the Auckland Sofitel Hotel gang shooting – but a patched Head Hunter gang member is still at large.

This evening, a male was stopped in a motor vehicle south of Kawakawa who police believe is linked to the Head Hunter gang member Hone Reihana.

As a result, a 31-year-old Northland man was arrested and will appear in the Whangarei District Court on Monday also charged with being an accessory after the fact.

Reihana is actively being sought by Police in relation to a firearms incident at the Sofitel Hotel in Auckland in April. The incident is the latest clash between Head Hunters members and those of rival gang the Mongols.

The 31-year-old arrested tonight is also believed to have been assisting Reihana in evading Police.

This morning a 25-year-old female who was identified earlier this week as being with Reihana and allegedly assisting him in evading Police appeared in the Whangarei District Court charged with being an accessory after the fact.

Police are continuing to appeal for sightings of Hone Reihana.

He is considered dangerous and should not be approached by the public.

A day after the shooting, Auckland Mayor Phil Goff said worsening gang warfare is putting innocent people at risk and he warns the city cannot go down the track of “gangland America”.

His comments follow a dramatic shooting at a 5-star waterfront hotel yesterday, which police say was linked to an escalating dispute between the Head Hunters and the Mongols gangs.

A gun was fired soon after 9am at the Sofitel hotel at the Viaduct, sparking a citywide response with armed officers and the Eagle helicopter.

Detective Inspector John Sutton said the incident – described by witnesses as “a moment of terror” – was linked to a shooting at the Head Hunters gang pad in Mt Wellington last weekend.

Goff told the Herald it was “intolerable that gangs are carrying out their feuds in public using firearms and risking public safety”.

“It really is important that New Zealand not go down the track of gangland America and zero tolerance is now shown to gangs employing firearms against each other or anybody else.”

A witness to the Sofitel shooting described “the moment of terror” when he heard gunshots.

Up to 20 officers carrying guns were seen entering the lobby, while customers and staff were bundled out to safety through a separate entrance.

The witness, who does not want to be identified, said he heard two gunshots.

“The sound reverberated through the hotel. There were two shots. A second apart. Bang. Bang,” the man said last night.

A colleague then stood up and shouted “shooter!”.

“It was actually the authenticity of the reaction on my colleague that made it very scary.

“When someone calls ‘shooter’, that’s almost like an Americanism that we are not used to. It gave us a sense of what it might be like in the US. It was just at that moment.”

He was with a group of people and they turned the lights off in the area they were in.

“That time of when we didn’t know what was going on probably only lasted a minute, and then everything subsided, because the shooter had gone, but the police didn’t treat it as if they had gone, so they came in to secure the hotel.”

The Herald also reported how the gang feud between the Head Hunters and the Mongolsis believed to have started over the name of a business.

Simmering tensions between the rival motorcycle clubs boiled over with the Mongols, whose senior members were deported from Australia, suspected of firing a semi-automatic firearm at the Head Hunters’ pad in Mt Wellington.

This act of aggression led to the police arresting five members or associates of the Mongols on the North Shore a few days later, who were charged with the unlawful possession of explosives.

The trouble between the Head Hunters and the Mongols which erupted so publicly with the hotel shooting had had been brewing for some time, with buildings and cars linked to individuals on both sides being targeted by gunfire or suspected arsons.

The Herald understands the police believe feud can be traced back to the use of a single word.

A faction of the Head Hunters who reside on the North Shore refer to themselves as the word – which the Herald has chosen not to publish – and they have taken exception to the Mongols setting up a business in March using the same word.

Anyone who sees Hone Reihana is asked to contact Police immediately by phoning 111.