My fair Meghan? How Audrey Hepburn has been the Duchess of Sussex’s role model and their lives have uncanny parallels

Comparisons between the Duchess of Sussex at Royal Ascot this week and Audrey Hepburn as Eliza Doolittle in the 1964 musical My Fair Lady were perhaps inevitable, so strikingly did the newlywed royal resemble the Hollywood siren.

Ladylike in a lace dress by Givenchy — Audrey’s favourite designer — Meghan made a dazzling impression.

But parallels between Meghan, 36, and Audrey — who was also in her mid-30s when she played that iconic role — don’t stop there.

Not only do the brunette beauties look similar, they’ve led remarkably similar lives.

In fact, Meghan has made no secret of her admiration for Audrey, who died in 1993 aged 63, hailing her as a style inspiration.

Her bookshelf features two tomes devoted to the star, which Meghan described in an Instagram post as ‘bedtime reading’. We chart the extraordinary parallels between Meghan and Audrey . . . 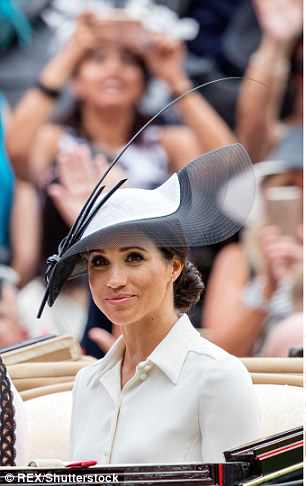 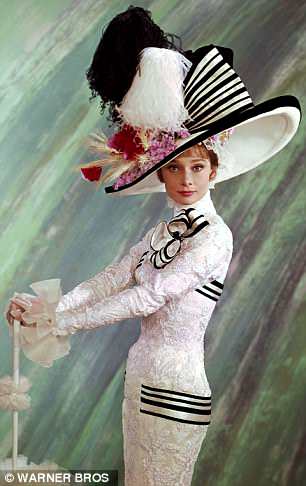 Audrey was a lifelong friend and muse of Hubert de Givenchy, the French fashion designer, and so it came as no surprise that he designed her wedding dress, not only in real life for her second marriage in 1969, but also for her on-screen nuptials.

Her dress in the 1957 film Funny Face is particularly similar to the Givenchy gown — designed by the fashion house’s new artistic director, Clare Waight Keller — worn by Meghan for her wedding last month.

Both were classic Givenchy — made from figure-hugging cream silk, with flattering boat-shaped necklines and minimal adornment.

And, of course, Meghan’s Ascot outfit this week of a Givenchy shirt-dress with black-and-white hat sparked comparisons with Audrey’s racecourse outfit from My Fair Lady. 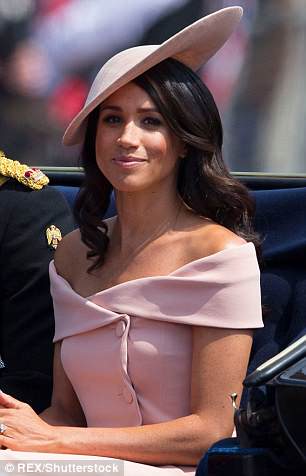 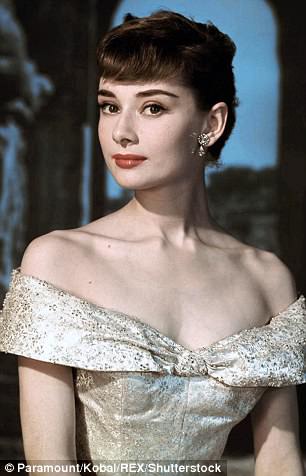 Audrey wore a black-and-white Givenchy gown in 1954 film Sabrina, an embroidered dress by the designer to collect her Academy Award later that year — and Givenchy was also behind the black dress she wore in the opening credits of Breakfast At Tiffany’s.

The French designer created a striking frock with a boat-shaped neckline for Audrey in 1953 film Roman Holiday. The boatneck is also a favourite of Meghan’s, memorably worn during the Trooping the Colour this month.

Meghan also opted for Givenchy with the caped dress she wore for her outing with the Queen in Cheshire earlier this month. 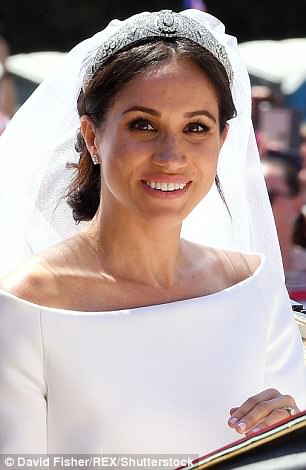 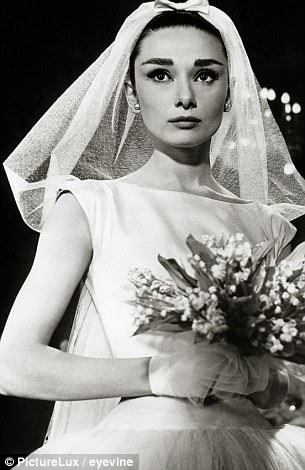 Meghan has taken a few tips from Audrey’s wardrobe when it comes to dressing down as well as dressing up.

Both demonstrated a love of the classic Little Black Dress, with Meghan sporting a ‘Jackie O’ dress by U.S. brand Black Halo to a reception in April.

But perhaps their biggest fashion match comes in the shape of stripes, particularly Breton-inspired black and navy-striped T-shirts, one of Audrey’s best-known looks.

In a 2015 blog post devoted to Breton style, Meghan shared a picture of Audrey and wrote: ‘The aesthetic is preppy chic — think Audrey Hepburn in Funny Face.’

The Duchess of Sussex is pictured (left) heading to a yoga session in striped black and white T-shirt, similar to one worn by Hepburn in 1955 (right)

Both Meghan and Audrey (right) demonstrated a love of the classic Little Black Dress, with Meghan sporting a ‘Jackie O’ dress (left) by U.S. brand Black Halo to a reception in April

Not only do Meghan and Audrey share immaculately shaped bushy eyebrows, but the Duchess has hers plucked to look like the Hollywood star — even asking for a treatment that’s named after her.

Since moving to the UK last year, Meghan has been to Mayfair salon Nails & Brows, where owner Sherrille Riley gives her ‘The Audrey’ every six weeks.

Costing £50, the treatment is described as a ‘must-have modern style’ which ‘instantly lifts the face, creating an effortless, natural look’.

Although bold eyebrows were in vogue in the Fifties, Audrey made hers bigger and more tapered than other actresses — and the style was soon the height of fashion.

Meghan is pictured in white at the opening of the Mersey Gateway Bridge Queen Elizabeth II in Cheshire (left), looking strikingly similar to Hepburn in the film Charade (right) 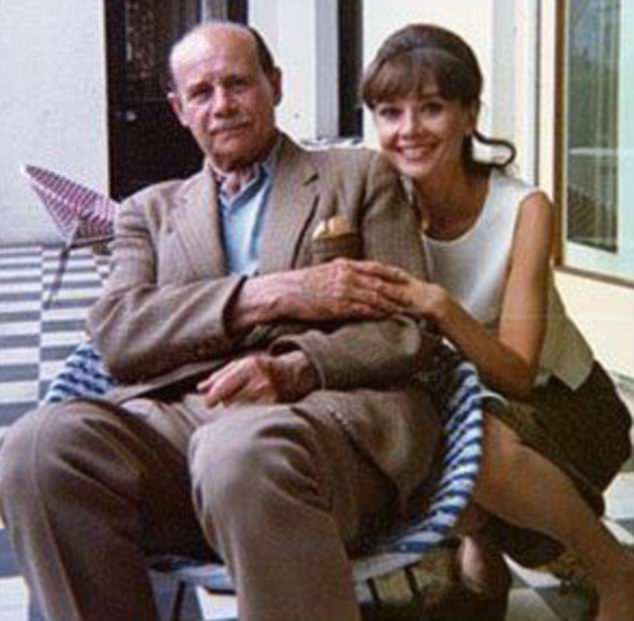 Meghan’s parents, Doria Ragland and Thomas Markle, divorced in 1988 after nine years of marriage, when she was just six years old. Audrey too came from a broken home. She is pictured in August 1964 in Ireland with her father

Meghan’s parents, Doria Ragland and Thomas Markle, divorced in 1988 after nine years of marriage, when she was just six years old.

‘It was the late Seventies when my parents met,’ she wrote in a 2015 article for Elle magazine. ‘My dad was a lighting director for a soap opera and my mum was a temp at the studio.’

Though she has never spoken about her parents’ divorce, it was thought to be amicable, with Thomas leaving a bouquet of flowers outside Doria’s Los Angeles home ahead of their daughter’s wedding last month.

Audrey, too, came from a broken home, with parents from very different walks of life.

Her father, Joseph Ruston, was born in Austria-Hungary and worked for a trading company, while her mother, Ella van Heemstra, was a Dutch noblewoman.

Audrey was six — the same age as Meghan — when her father left the family and moved to London, a sudden departure she described as ‘the most traumatic event of my life.’ 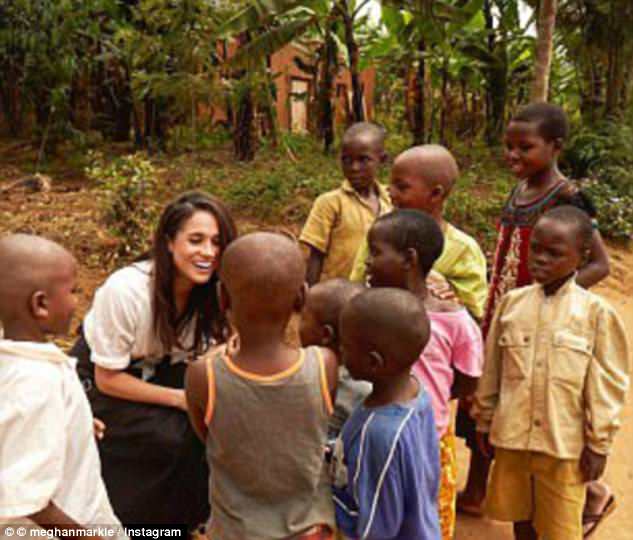 Meghan started her charity work at a young age, volunteering at an LA soup kitchen from the age of 17. Since then, she’s lent her star power to several international charities, including One Young World and UN Women (trip pictured) 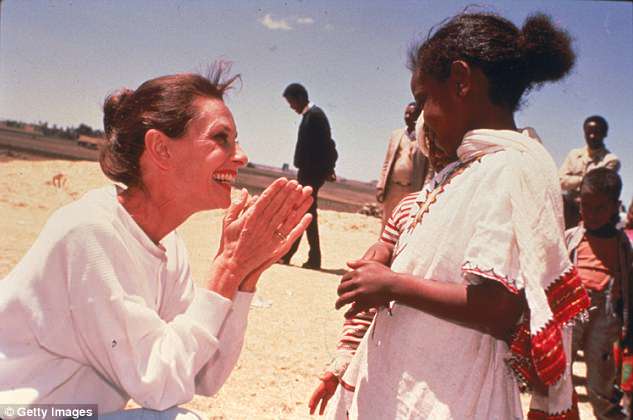 Similarly, Audrey turned her hand to humanitarian work, becoming a goodwill ambassador for Unicef and going on trips to Ethiopia (pictured), Vietnam and Somalia

Audrey married actor Mel Ferrer in 1954, just eight months after meeting him at a cocktail party. Their son, Sean, was born in 1960 — but the marriage was far from happy.

Rumours swirled about Mel’s controlling behaviour and Audrey’s mother hated him, calling him a ‘frog-faced delinquent’.

After 14 years together, the pair divorced in 1968. Audrey met her second husband, psychiatrist Andrea Dotti, on a cruise that summer.

They married the following January, and their son, Luca, was born in 1970. This marriage lasted 13 years.

Meghan has also been married before — to TV producer Trevor Engelson, whom she wed in a Jamaican beach ceremony in 2011.

But their long-distance relationship — Meghan lived in Toronto, while Trevor was based in Los Angeles — became impossible to sustain and they separated after two years and divorced in 2013.

According to royal biographer Andrew Morton, Meghan returned her rings to Trevor by post. 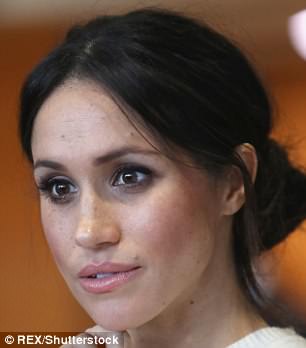 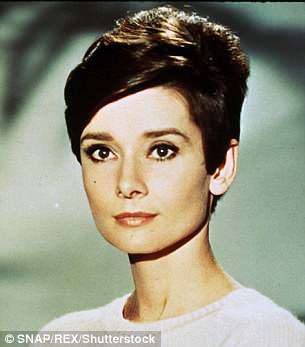 Not only do Meghan (left) and Audrey (right) share immaculately-shaped bushy eyebrows, but the Duchess has hers plucked to look like the Hollywood star — even asking for a treatment that’s named after her

Meghan started her charity work at a young age, volunteering at an LA soup kitchen from the age of 17.

Since then, she’s lent her star power to several international charities, including One Young World and UN Women.

In 2016, she was made global ambassador for World Vision, which took her on trips to Rwanda and India to see the charity’s work on water projects and education.

As well as sharing snaps on her Instagram account, she wrote for Time magazine and has since given speeches on women’s rights.

Similarly, Audrey turned her hand to humanitarian work, becoming a goodwill ambassador for Unicef and going on trips to Ethiopia, Vietnam and Somalia. 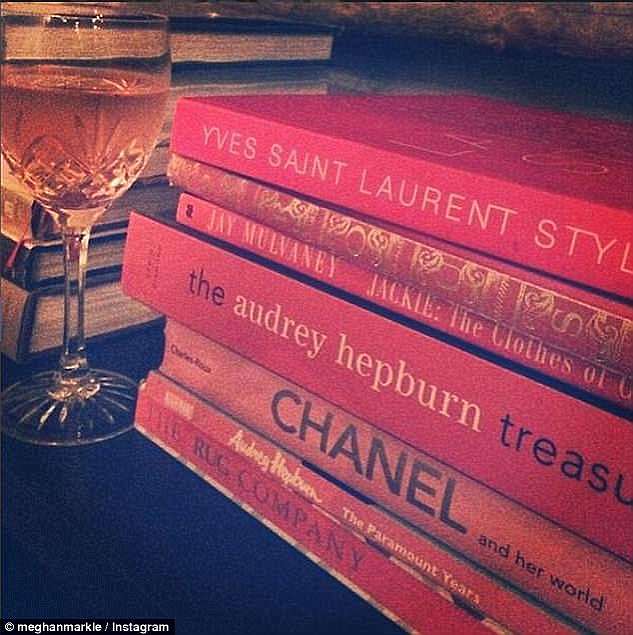 Ms Markle, 36, once pictured a book about Hepburn on her Instagram (pictured)

Though Meghan’s career on the small screen (she starred in legal drama Suits from 2011 to 2016) was successful, her film roles were rather less triumphant.

Over the years she’s had bit-parts in several turkeys — including 2005 rom-com A Lot Like Love and 2011 comedy Horrible Bosses.

And even Audrey wasn’t immune to a box office flop. Her 1964 film, Paris When It Sizzles, was uniformly panned. Bloodline, in 1979, was reviewed as ‘the worst film of the year’.

As the Mail recently revealed, Meghan has a dazzling diamond collection, worth an estimated £1 million.

Audrey, too, adored diamonds, famously sporting the 128-carat Tiffany Yellow Diamond in publicity for the 1961 film Breakfast At Tiffany’s. 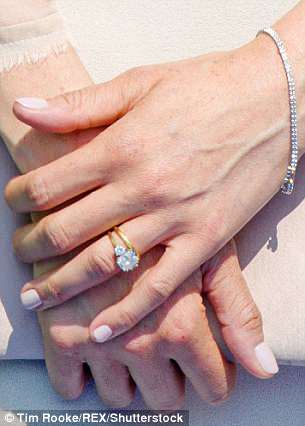 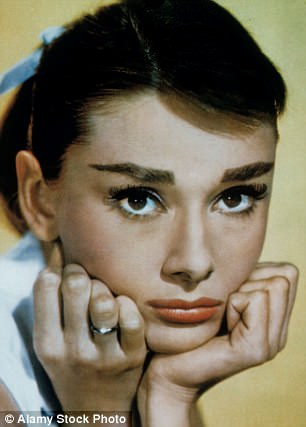