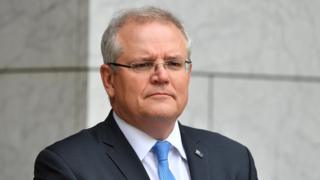 Australia has suspended its extradition treaty with Hong Kong in response to fears over a new national security law imposed by China.

Canada and the UK have also recently suspended extradition agreements.

This would enable a pathway to permanent residency for about 10,000 Hong Kong residents currently working and studying in Australia, Mr Morrison said.

He said Australia had already formally notified Hong Kong and advised the Chinese authorities on the treaty change.

China pushed through the wide-ranging law last week which critics say makes it easier to punish protesters and critics of the Chinese government.

As the extent of the law’s reach is still uncertain, critics have said it could also lead to foreign nationals being arbitrarily detained in Hong Kong.

That has led to Australia, and other nations, upgrading their travel advice to citizens in Hong Kong.

Australia urged its 100,000 nationals in Hong Kong to reconsider their stay there in a message on Thursday.

“You may be at increased risk of detention on vaguely defined national security grounds. You could break the law without intending to. If you’re concerned about the new law, reconsider your need to remain in Hong Kong,” said the Department of Foreign Affairs and Trade.

Mr Morrison said his government, along with others “have been very consistent in expressing our concerns about the imposition of the national security law on Hong Kong.”

Hong Kong is a former British colony and was handed back to China in 1997.

Under the arrangement, Hong Kong was allowed to have certain freedoms for 50 years, setting it apart from the Chinese mainland.

However the UK, and other Western nations say China’s new law directly threatens those freedoms and rights.

China has criticised the UK’s offer, accusing it of “gross interference” in its domestic affairs.