London: When the Australian borders were closed in March last year, Liberal voters Sikander Kang and his wife supported the decision, even though it kept them separated from their toddler son who was being cared for by his grandparents in Punjab, India.

At the time, they thought the separation would be short-term.

But 15 months later the Melbourne family says all their pleas for a repatriation flight for their son with their parents from India have been rejected. They are wondering if they should move to Canada in the hopes of reuniting with three-year-old Viraj. 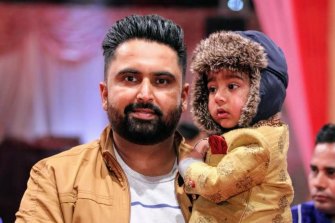 Sikander Kang and his son in March 2020, the last time they were together.

When Kang’s wife suffered a back injury after Viraj’s birth in 2018, his parents left their home in Punjab to help care for the baby and his older sister Sehar, then 7, in Melbourne.

In early 2020, all the Kangs went back to India for a family wedding. In early March, the couple left Viraj with the grandparents so the mother could start a new job and Sikander could start his nursing course. They brought Sehar home with them to start school.

Sikander’s parents were scheduled to follow in just a few weeks so that Viraj could spend his second birthday at home in Melbourne with his parents.

But the pandemic struck. The Australian citizens have missed out on 15 months of their son’s life and have no idea when they’ll see their youngest again.

Every plea for an exemption for their parents to bring home their child has been rejected.

“Last week he told us he had already packed his bags and asked us to send a helicopter to bring him home – that brought stabs to my heart,” Sikander said.

The Kangs have missed Viraj’s second and third birthdays, and with the borders not due to open until at least mid-next year, they fear they could also miss his fourth.

The 38-year-old said he was furious when Prime Minister Scott Morrison – whom they voted for at the last election – posted on his Facebook page about sadly not being able to spend his birthday with his family. 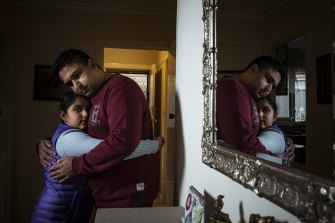 Sikander Kang, with his daughter Sehar, has been separated from his son for more than a year.Credit:Chris Hopkins

“How can he go home and sleep at night? He’s just missing them for one night, he gets to go home and see them the next day, I haven’t seen my kid for nearly two years.”

He said Australia was their dream country but they were now exploring a move to Canada.

“We thought when we became citizens that we would have the strongest passport in the world and that this was a government that cared about human rights. But now I am feeling like I’m behind prison bars without being guilty of anything.”

Viraj is one of 209 children stuck in India without their parents as a result of Australia’s strict border bans, forbidding citizens from leaving and foreigners from entering.

The Australian government has banned all commercial flights from India and Qantas, which is operating the repatriation flights from Delhi, does not allow unaccompanied minors on board.

Figures supplied to Parliament last week, showed there were 10,998 Australians in India seeking to return. Some 1024 were classed as vulnerable.

The Kangs say they welcomed the border bans when they were first introduced and praised the job the government has done to keep the public safe from COVID-19 but after a year, they believe more should have been done to help Australian citizens around the world, particularly children.

“We appreciate what Mr Morrison has done to protect citizens inside Australia but being a developed country we should have done so much better for our citizens stuck outside the country,” Sikander said.

“It’s been a year now and there’s no definitive date for when we’ll see our son, we are so emotionally drained, I don’t want to stay in this country anymore.”

He says the government should be resolving the problem by either letting a grandparent travel with minors or allowing parents to travel to collect their children and fly them home on a designated flight after pre-departure tests and quarantine.

A spokesman for the Department of Foreign Affairs and Trade said current COVID-19 challenges in India were “causing difficulties for many families”.

“DFAT is working with families in India and Australia to ensure the travel of minors is undertaken in appropriate and safe circumstances,” the spokesman said.

“Under Qantas guidelines for safe travel, minors must be accompanied by a parent, guardian or relative.

“Therefore, Australian minors who are with non-Australian citizen relatives or guardians in India cannot travel alone and must be accompanied.”