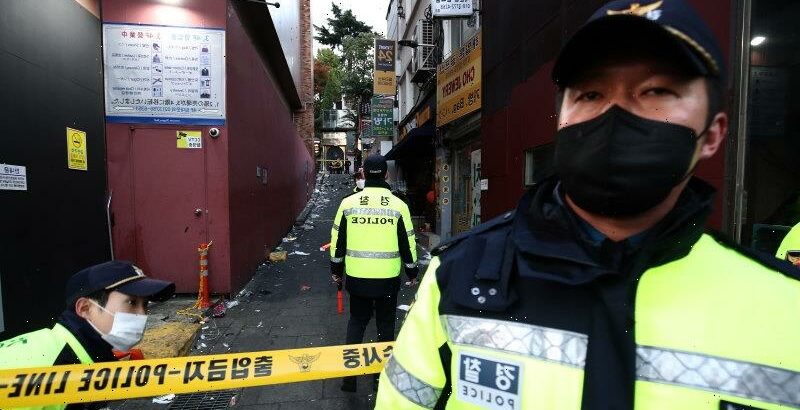 An Australian is among more than 150 mostly young people who died when they were trapped and crushed during Halloween festivities in South Korea on Saturday night, foreign affairs officials have confirmed.

A Department of Foreign Affairs and Trade (DFAT) spokesman said on Sunday night that the Australian Embassy in the South Korean capital of Seoul had been notified of the death of an Australian in the “tragic” incident. 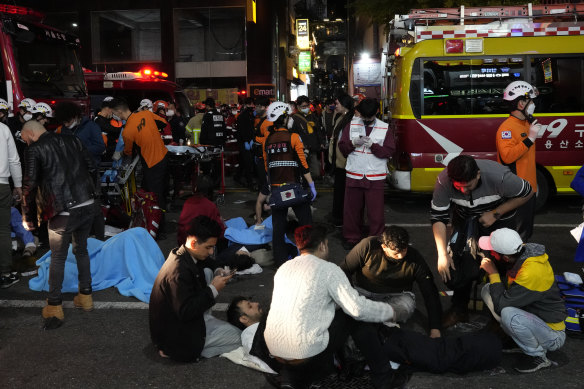 Rescue workers and firefighters try to help injured people near the scene on Saturday night.Credit:AP

Consular officers are providing assistance to the individual’s family in Australia. The officers were also helping “a number” of other Australians who were present at the event, the DFAT spokesman said.

“The Australian government sends its condolences to the family and others affected by this tragic incident. We ask for the family’s privacy to be respected during this difficult time,” the spokesman said.

An estimated 100,000 revellers had massed in Itaewon, a vibrant area of bars and restaurants in the capital city of Seoul, many in costume to celebrate Halloween and let their hair down after the recent easing of COVID-19 restrictions.

Just a few hours later, however, the festivities took a tragic turn as partygoers collapsed and were trampled on in a crowded alleyway near an exit to the subway station.

In horrific and chaotic scenes captured on mobile phones and posted on social media, bystanders and emergency workers were shown performing CPR on unresponsive people on the footpath and bodies could be seen covered in blue sheets before being taken away on stretchers to hospitals and a gymnasium.

Authorities said 151 people, most of them in their 20s and 30s, had been killed and a further 104 were injured. Of these, 24 were in a critical condition, according to Seoul City’s disaster headquarters, indicating the casualty count could well rise.

Ninety-seven of the fatalities were women and the dead also included 19 foreigners including nationals of Iran, China, Norway and Uzbekistan, South Korea’s Yonhap News agency reported the national fire agency as saying. Thailand’s embassy in Seoul also said a tourist from Thailand was among the dead.

With Chris Barrett and Sean Na