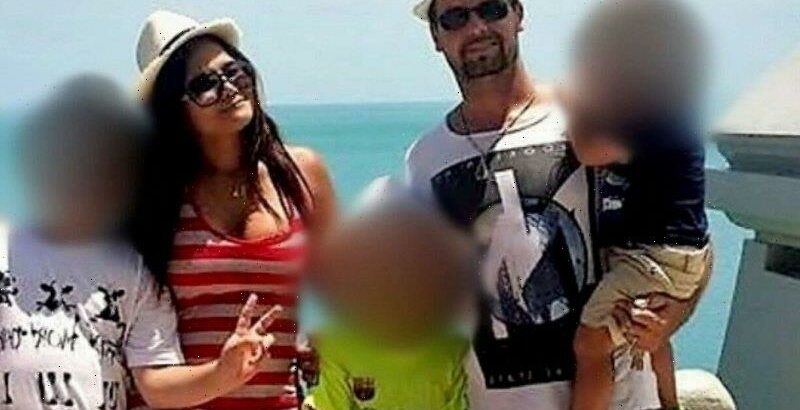 An Australian man and his Thai wife sentenced to death for trafficking half a tonne of crystal methylamphetamine for the Hells Angels has been acquitted after four years in a Bangkok jail.

Luke Cook, 37, from Duncraig in Western Australia, arrived in Sydney on a Thai Airways flight on Sunday after being cleared by the Supreme Court in Bangkok last week. 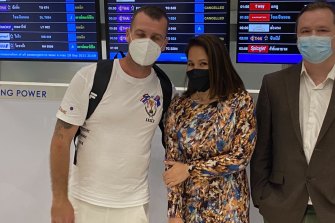 Luke Cook at Bangkok airport with wife Kanyarat Wechapitak. He arrived in Sydney on Sunday after being cleared of drug trafficking, for which he had been sentenced to death.

Pleading his innocence since being jailed in 2017, the father of two had been convicted on the evidence provided by an Australian now wanted on a warrant for sex trafficking.

Cook, who was an offshore worker as well as running a bar and guest house in the coastal Thai town Pattaya, was accompanied to the departure gate at Bangkok airport by Australian embassy officials and will be held in quarantine in Sydney for a fortnight before being re-united with his two sons.

His father Paul Cook, a New Zealander, has campaigned tirelessly for his son’s release, maintaining he had been set up.

Cook’s Thai wife Kanyarat Wechapitak and an American man Tyler Gerard, who had also been sentenced to death after being convicted of drug smuggling, have also been released. Gerard flew back to the United States last Friday while Kanyarat has remained in Thailand. 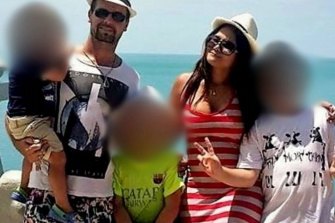 Their trial had centred around claims by Thai police that Luke Cook had been paid $US10 million ($A13.7 million) by the Hells Angel’s bike gang to smuggle 500kg of methylamphetamine, or ice, into Australia in 2015 aboard his yacht Jomandy, on which Gerard was a crew hand.

Police alleged Cook had panicked when a Thai navy vessel approached and dumped the cargo overboard. They said a package of 50.4kg of the drug was later found on a beach near the Thai navy base of Sattahip in Chonburi province.

However, defence lawyers supported by the Melbourne-based Capital Punishment Justice Project claimed in their appeal that Cook and his fellow defendants had been framed by another fly-in, fly-out Australian offshore worker named Douglas Shoebridge. 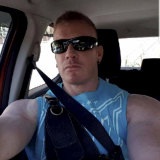 Douglas Shoebridge, who testified against Luke Cook in court in Thailand

Shoebridge, 38, a compass adjuster also known as “Big Daddy”, testified that Cook had confessed his crime to him.

Shoebridge left Thailand in 2019 after a warrant of arrest was issued by Bangkok Criminal Court against him and Tanzanian woman Sara Musa Chitanda for trafficking in women from East Africa to the sex trade in south-east Asia.

Shoebridge testified that Cook had hired him as a diver to go on three trips to look for gold which had been dumped offshore. On the third unsuccessful trip Shoebridge said Cook confessed that he was really searching for the drugs he had dumped overboard.

However, Shoebridge’s reliability as a witness was brought under question after a NSW inquest into the death of high-ranking Hells Angels member Wayne Schneider near Pattaya in 2015 shone a spotlight on the foreign criminal underworld there.

Sydney kickboxer Antonio Bagnato was in 2017 sentenced to death for Schneider’s murder and the inquest was told that the two cars used in the kidnapping and killing of Schneider were rented for Bagnato by Shoebridge’s partner Siriphan Saimart.

The inquest also heard that Shoebridge gave 100,000 Thai baht ($A4130) to Siriphan to rent a house in Pattaya where Schneider was tortured and killed.

Bagnato was later acquitted of the murder and re-sentenced for assault, as well as being arrested on illegal firearms charges.

In 2015 Cook pleaded guilty to aiding and abetting the escape of Bagnato to the Cambodian border following Schneider’s death.

Cook told a Thai court at the time that Bagnato, who had rented a room at his bar and guesthouse Jolly’s Piss Stop Bar, had turned up on his doorstep with a gun demanding that he drive him to the border. But Cook said he knew nothing about the murder.

While Bagnato was extradited from Cambodia, Cook was given a three-month jail term, fully suspended for two years.