Wellington: New Zealand police have named two Australians as the men who died after falling hundreds of metres in a horror climbing accident on Wednesday.

Brett Alexander Lentfer, 62, and James Harry Spaile, 44, were killed after their ropes were severed during a climb near Queenstown on New Zealand's South Island. 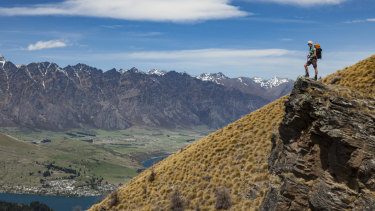 A hiker looks over Lake Wakatipu to the Remarkables on New Zealand’s South Islands.

They were attempting a challenging route across the top of the Remarkables mountain range, along with a guide, who was unharmed.

The first rescuer on the scene said the climbers appeared to have fallen 300 metres to their death after their ropes were cut on sharp rocks.

"Our condolences are with the family and friends of both men," police said in a statement.

Chris Prudden, of the Queenstown mountain rescue team, was the first person to view the scene after the alarm was raised on Wednesday.

One of the men's bodies was retrieved on Wednesday afternoon and the Alpine Cliff Rescue team recovered the second climber about 8am on Thursday. Initial reports said the men fell 600 metres, but 300 metres was more accurate.

The men were climbing the Grand Traverse of Single and Double Cones, an eight to 12-hour route across the top of the Remarkables, with a guide from Wanaka-based Aspiring Guides.

The rescue work was done by helicopter. Prudden, who saw the party from the mountains, liaised with rescuers and provide communications.

The only person who knew what went wrong was the guide, he said.

"It would be my assumption that he was involved in it [on the rope]. The initial report I got was … somehow the rope was cut.

"The ropes are incredibly strong but sharp rocks can do the damage really quickly. That's not surprising given the nature of the terrain."

The Grand Traverse is described as one of the best alpine outings in New Zealand and only for experienced climbers.

Prudden said he had seen "ridiculous" activity on the challenging route in recent summers.

It was exposed and steep and the only way to get off it was to complete it, he said.

He was not surprised there had been a fatal fall in the area given its increasing popularity among climbers.

However, he was surprised Wednesday's fall involved a qualified and well-trained guide.

"It's just a worse-case scenario."

Prudden was concerned people would write about their climbs in the area on social media, making them sound easier than they were. The misinformation fuelled a sense of confidence when climbers did not necessarily have the right mix of skill and judgment for the challenging terrain, he said.

He advised against attempting a solo climb on the mountain and said people needed to be prepared to anchor themselves to the side.

There had been several rescues from the route in recent years.

Two climbers were rescued from the route after attempting to take a shortcut two years ago and spending a night on a ledge. Five weeks ago, three people were lifted off a ridge in deteriorating snow conditions.