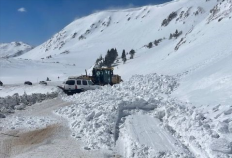 Loveland and Berthoud passes were hit by avalanches on Wednesday, no injuries were reported.

Loveland Pass was closed late Wednesday morning by a “small” avalanche, according to the Colorado Department of Transportation.

The snow slide hit at about 10:50 a.m., shutting down U.S. Highway 6 in both directions between Interstate 70 and Montezuma Road, CDOT said.

One vehicle, an SUV, was caught in the slide, no injuries were reported. A CDOT crew cleared a path and the driver of the SUV was able to free the vehicle. Loveland Pass will remain closed for the afternoon as CDOT crews perform avalanche mitigation work.

An avalanche hit Berthoud Pass at about 11 a.m., according to the Grand County Sheriff’s Office. The avalanche happened in the Current Creek area and there were initial reports that two people were possibly involved in the slide.

At about 1:35 p.m., the sheriff’s office announced that emergency responders “determined that there were no victims in the slide.” Responders used dog teams and beacons as part of the search. Tracks going into the slide area were picked up coming out of the other side.