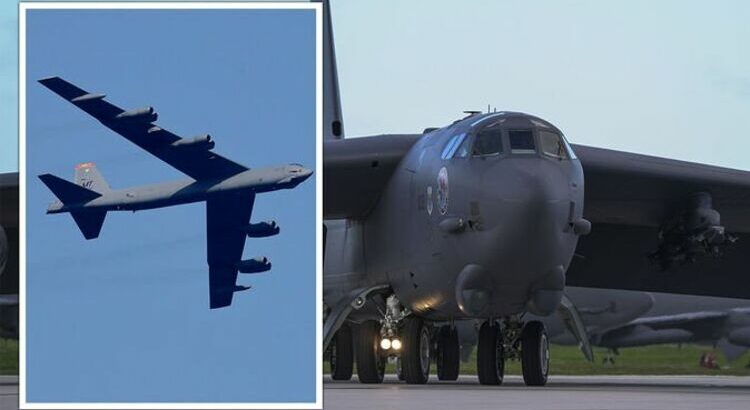 US Air Force deploy B52 bombers over Ukranian airspace

The latest clutch of exercises in and around Europe have set off from the UK, with British bases hosting American aircraft from the United States Air Force (USAF). A diverse selection of planes have used RAF bases in Fairford and Brize Norton as gateways to the continent, where they would go on to collaborate with other NATO members. Earlier today, the USAF released footage of its B52 Stratofortress bombers flanked by allied aircraft from Romania, Greece and Italy.

The USAF provided aircraft from the 5th Bomb Wing of the Minot Air Force Base (AFB) in North Dakota.

Four have settled in at Fairford over the last week, conducting drills over the skies of Gloucestershire alongside RAF personnel.

The bombers, specifically B52H version aircraft, are some of the most advanced of their kind in the world.

Designed and manufactured by Boeing, the USAF has operated with the B52 range – the “backbone of the strategic bomber force” – since the 1950s.

The payload is “mixed ordnance” and may include bombs, mines and missiles, including cruise missiles.

Despite this weight, the USAF states it can execute “strategic attack, close-air support, air interdiction, offensive counter-air and maritime operations”.

And it can still travel at blistering but sub-sonic speeds for long distances.

After taking off from the UK to the west, they could land in Argentina in less than 13.5 hours.

But in-air refuelling allows the aircraft to go on for only as long as crews can, as otherwise, flights would be near-limitless.

The planes also have a total thrust of 17,000 pounds per engine, helping them lift off, and a 56.4-metre wingspan keeps them in the air.

On top of its imposing physical presence, each B52 comes equipped with impressive monitoring technology.

Among the capabilities touted by the USAF are “advanced targeting pods” built to acquire long-range targets.

These can identify and process images in-flight that aid their arsenal in almost any weather condition.

Pilots commanding the flights can also utilise some advanced equipment of their own.

During nighttime missions, crews come outfitted with night-vision goggles to assess the situation themselves.

The goggles mean that B52 pilots can combine the plane’s technology with their own trained instincts.