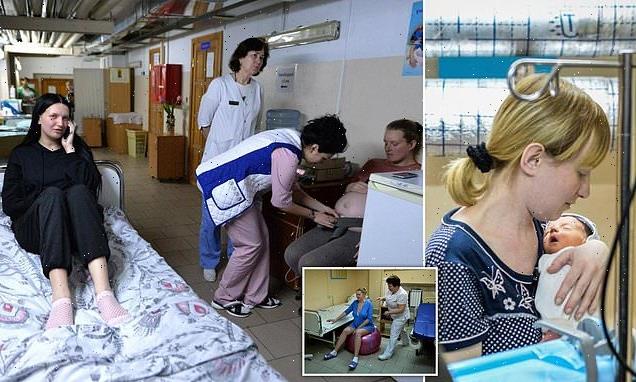 Clinging to life, babies born amid the evil of Vladimir Putin’s war: IAN BIRRELL reports from Ukraine maternity hospital where expectant mothers and newborns were moved into basement for protection

The tiny baby girl was two days old and weighed barely three pounds. She lay in the ventilator under a blue light, adorned with tubes taking air into her lungs and vital nutrients into her blood.

Born 11 weeks early, the infant looked so fragile. But she managed to raise her right arm – with bandages swaddled around a deep-line catheter – as if attempting to give a cheery wave of greeting after we walked into the converted classroom. Beside her, in a second ventilator with its brightly-patterned curtains closed against the light, lay another tiny premature baby.

Adelina was putting on weight. So yesterday – seven days after her birth nine weeks early – doctors deemed her strong enough join her mother Nastya Mashevska in a room down the hospital basement corridor. 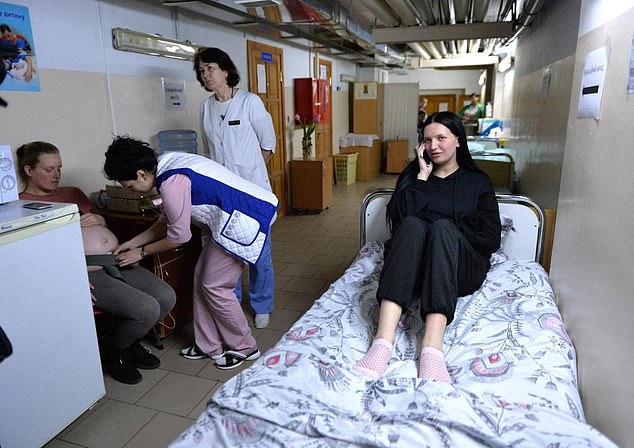 Nastya Mashevska was able to be joined by her baby in a room down the hospital basement corridor, she is currently at Zhytomyr Regional Perinatal Centre which has previously been bombed 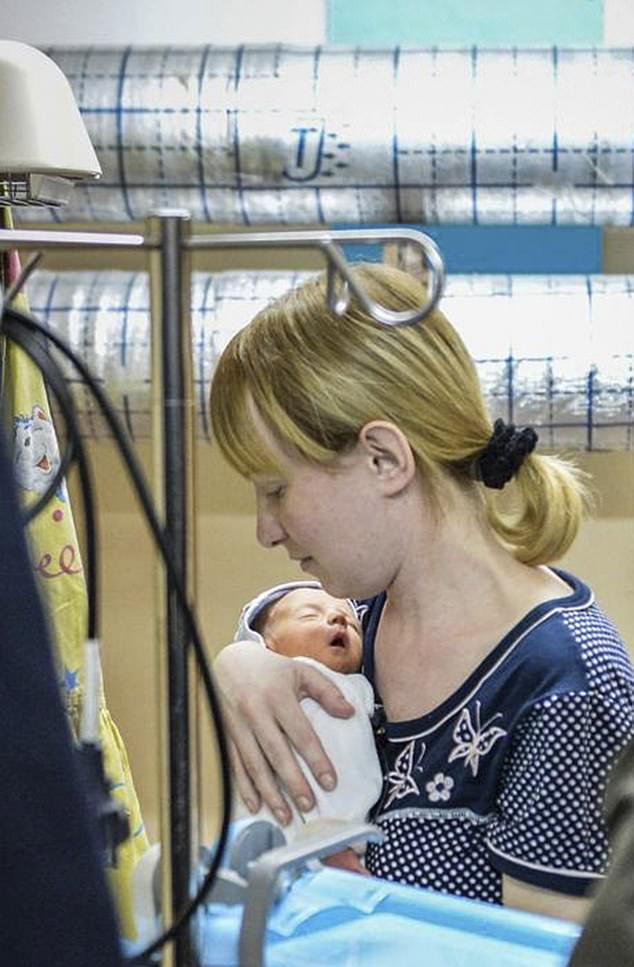 Yulia Mykhailiuk (pictured), 33, believes she gave birth prematurely due to the stress from the war

Another child at the start of life’s long journey – and another medical miracle amid the atrocities of war.

These children were born in a maternity hospital that was forced to move expectant mothers and babies – along with doctors, nurses and even an operating theatre – into its basement where staff fought to protect children born at a time of conflict.

‘It was scary at first but you get used to it, although I am still a bit nervous about the situation,’ said Olga, the head nurse, showing me the premature babies.

No wonder. For outside the hospital entrance was the crater left by a massive bomb dropped from a Russian aircraft, alongside all the usual obscene debris of war such as piles of rubble, twisted metal, shattered buildings and buried vehicles. 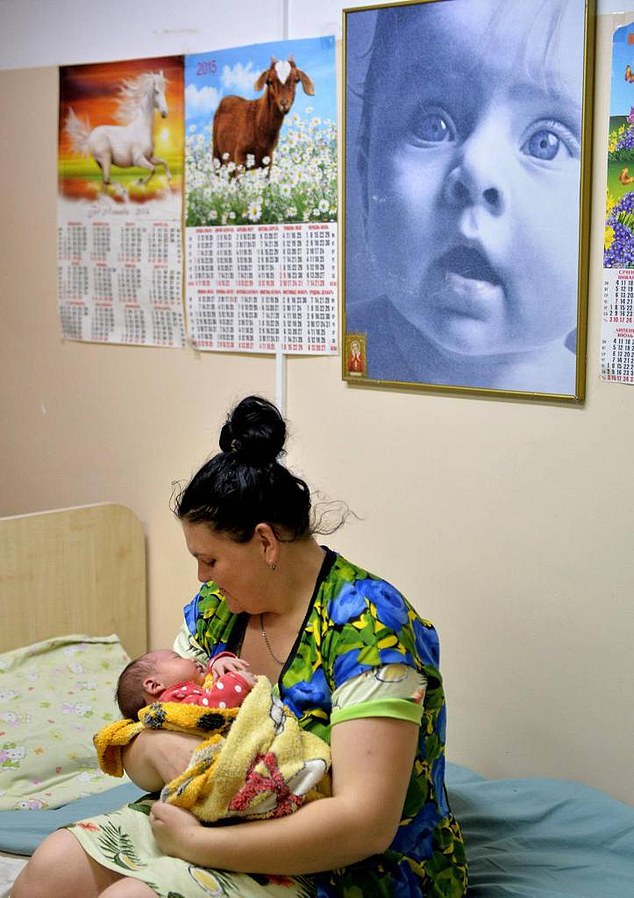 The hospital has been hit by Russian bombs, with a crater outside the hospital entrance and lots of debris and damage inside

Many of the hospital windows were blown out, there were holes in walls of freshly painted wards and shards of sharp-edged shrapnel littering the car park.

Another bomb dropped at the same time damaged 25 houses just down the road, killing five people. And the depressing ruins of a destroyed secondary school scar the centre of Zhytomyr, home to about 260,000 people.

Even amid the inhumanity of Vladimir Putin’s war, there is something uniquely barbaric about bombing a hospital dedicated to new-born babies.

Zhytomyr Regional Perinatal Centre, a 150-bed maternity hospital 90 miles from Kyiv, tends to new-borns and infants with birth difficulties from a part of Ukraine that has seen extensive fighting along the eastern flank of Russia’s invasion.

As this conflict enters its second month, doctors say they are seeing a sharp rise in premature births due to the extreme stresses facing expectant women. 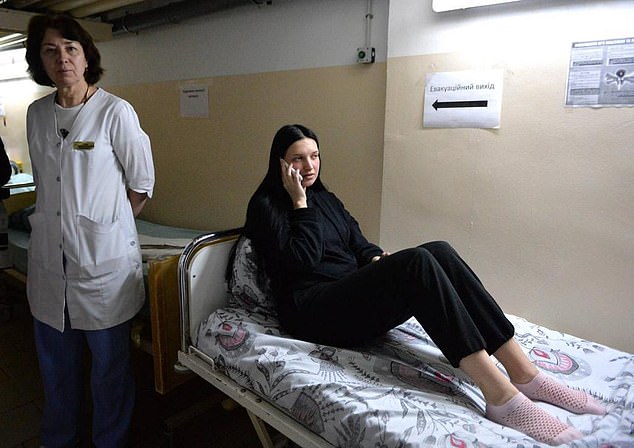 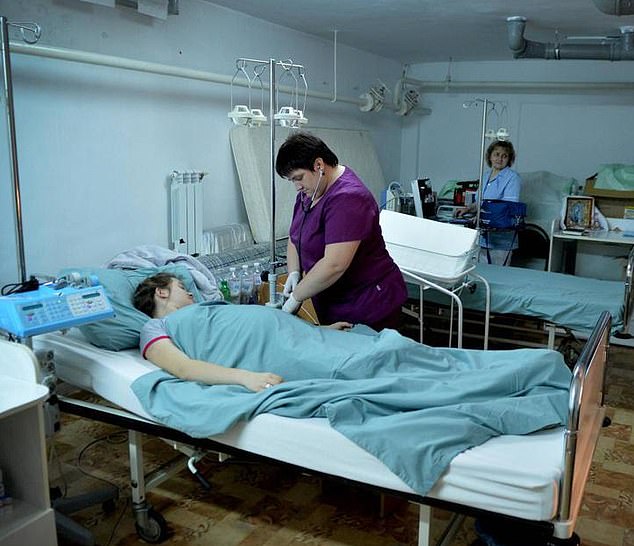 After war broke out, storage, staff and teaching rooms in the basement were converted into wards, an operating theatre and a room for babies on life support

They were not expecting problems with Adelina’s birth since her mother, a 21-year-old student in international relations, was fit and healthy – but then her home town of Novohrad-Volynskyi became snared in conflict.

‘I am sure it was due to the stress of war since they were shelling it as an important military town,’ said Mashevska. ‘I was in a state of shock after giving birth so early. My pregnancy had been perfect and it did not look like there would be problems.’

Yulia Mykhailiuk, 33, said the birth of her first child had been normal but her second – a boy called Maxym – was born seven weeks early, forcing her to spend nearly a fortnight in the stifling hospital basement as he gathered strength.

‘I have no doubt this early birth was down to the war,’ she said. ‘When you have planes going over your head and see your child hiding from the awful sounds, how can you not be scared?’ 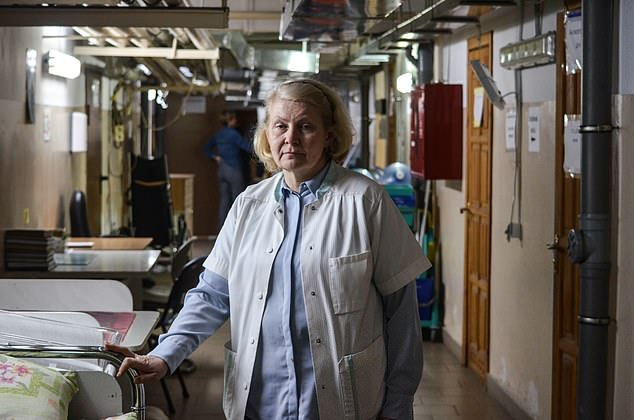 Maryna Tyshchenko, 56, has been in charge of the maternity unit that was bombed by Russian forces for more than 15 years

Maryna Tyshchenko, 56, the obstetrician-gynaecologist who has run Zhytomyr’s maternity unit for 17 years, said the number of premature births they were seeing had ‘at least doubled’ in the war.

Her concerns echo claims by doctors at prenatal clinics in other parts of Ukraine, who are seeing soaring rates of pre-term births.

One doctor in Kharkiv, a city suffering horrific bombardment, said they comprise half of all deliveries now. Tyshchenko warns this is creating future problems. ‘Any child born early is going to have some kind of health issues. They may not be serious but they will be noticeable, so we put all possible efforts into caring for them at this time.’

When the war broke out last month, her team hastily converted storage, staff and teaching rooms in the basement into wards, an operating theatre and a room for babies on life support. In the first five weeks of conflict, 80 babies were delivered.

During our visit they had 12 prenatal and 8 postnatal patients, some sitting on beds with new-born babies in a long corridor beneath banks of heating pipes dangling from the low ceiling.

‘We can only do our best – and hope,’ said Tyshchenko. The doctor has devoted 32 years to this unit. Earlier she had tears in her eyes as she showed me around the damaged wards, telling how they had transformed the hospital since she started work there as the Soviet Union collapsed.

She spoke passionately about their efforts to provide the best possible care. But then came the bombing. ‘The whole building started shaking,’ she said, sticking an arm through a door without glass. ‘All this side was destroyed with glass blown into the corridor.’

Serhii Sukhomlyn, the city’s mayor, said Zhytomyr had suffered constant assaults and casualties from Russian aircraft dropping 500-kilogram bombs. The city has been targeted as a key point on the arms and aid supply route from Europe to the frontline. Attacks have meant there has been no heating for four days, and have damaged a water pumping station and hit a fuel dump. 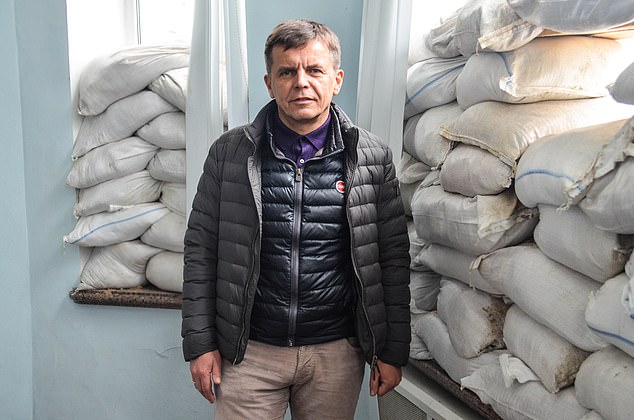 Serhii Sukhomlyn, mayor of Zhytomyr, said ‘The world’s second biggest army is trying to defeat the 22nd biggest and failing’

Russia claimed to have fired four missiles at the city from the Black Sea last weekend. Sukhomlyn believes they are being attacked also in retaliation for the fact that the region has provided the most recruits for Ukraine’s armed forces since the conflict with Russia began in Crimea eight years ago.

In the first two weeks alone, almost half the civilian population left the city. Having moved the families of 47 children with cancer from the city to Switzerland, then those of children with other medical conditions and learning disabilities to the Netherlands, there are plans to start moving ‘thousands’ of children and wives of men on active military duty to four more European nations next week.

Sukhomlyn said this was due to reports that Putin’s goons in occupied areas of Ukraine are searching for relatives of people serving in the armed forces.

‘The world’s second biggest army is trying to defeat the 22nd biggest and failing. This is obvious for the rest of the world but Putin needs some smaller victories to present his people,’ he added.

So the war drags on, the death toll mounts, the destruction of schools and hospitals continues – and distraught doctors such as Tyshchenko, born in Russia, fight to save the lives of premature Ukrainian babies born in a basement. ‘I cannot comprehend how someone with the same blood as me could do all this,’ she said.

Looking at those tiny infants struggling for life, I could not agree more – it is simply unfathomable.