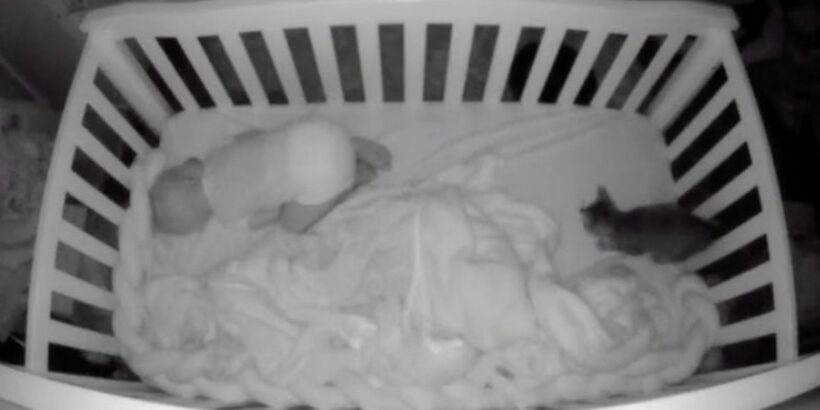 In the clip, uploaded on TikTok by user @sonja_overman on January 9, the baby is fast asleep on her front when the cat pokes her nose through the bars.

Climbing inside, the curious feline trots over to the baby who wakes up.

The baby then holds the kitten in her arms, with both curling up together for a cuddle.

Unsurprisingly, the cute footage was a hit and was "liked" more than 400,000 times and hundreds of people left comments about the angelic scene.

One person wrote: "Ahh haha this is the cutest thing ever."

"That cat was thinking 'I thought we were sleeping here,'' joked another viewer.

Someone else quipped: "Is nobody going to say curiosity killed the cat? I'll show myself out."

A fourth person said: "We had a cat when my sister was a baby that slept on a dresser by the door and would attack anyone who walked in when the baby was sleeping."

The mum clarified that she worked nights and as soon as she watched the baby cam footage she called her boyfriend and asked him to check up on them both.

All the doors have been taken away because the house is being remodelled so the kitten is currently able to get everywhere, she added.

Both kitten and baby were fine.

In another video, the mum said the tabby kitten was "obsessed" with her baby – who loved her just as much back.

This comes after a pet cam caught the moment a treat was fired from a Furbo making the poor feline leap skywards in terror.

At a cat owner re-watched her pet cam after struggling to breathe in the middle of the night and made a startling discovery.