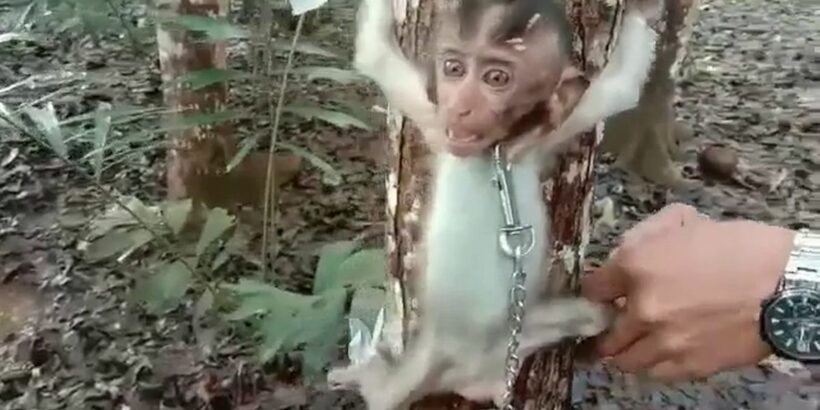 Sickening footage has been obtained by animal advocacy groups of a private online group buying a baby monkey and taking requests of what they want to be done to it.

Not-for-profit UK-based project Action for Primates and Los Angeles-based nonprofit organisation Lady Freethinker found the group, based in the US but with UK members, during its investigation into online animal cruelty.

These sadistic acts involve group members watching online to 'enjoy' the suffering of animals for entertainment.

The baby monkeys receive appalling levels of suffering through torture and are murdered.

Horror abuse inflicted on these babies included cutting off ears and fingers, using a pin to pierce tongues and eyelids, hanging or tying them down so they can be beaten.

In one video, a monkey was covered in flammable liquid and set on fire.

The organisations discovered Individual members have been buying a private baby monkey or have joined with others for a ’share’ of a 'community monkey'. They would then send requests as to what they want done to the babies.

Money is sent through PayPal to individuals in Indonesia who the organisations say help obtain the baby monkeys and then carry out the wishes of the members.

Lady Freethinker and Action for Primates are now calling on social media and video sharing platforms to take immediate action to stop the proliferation of animal torture content that is posted online.

US law enforcement agencies and Indonesian authorities have also been made aware to the monkey torture group and its members.

Dr Nedim Buyukmihci, veterinarian and co-founder of Action for Primates, said: "As a veterinarian with many decades of experience, I have never witnessed the degree of sadism I have seen in these videos. No social media or video-sharing company should tolerate the existence of such individuals and groups on their platforms.''

A spokesperson for Lady Freethinker stated: "These monkeys' suffering is real, and it is heart-breaking. Social networks can and must do better to stop animal torture for fun and profit."