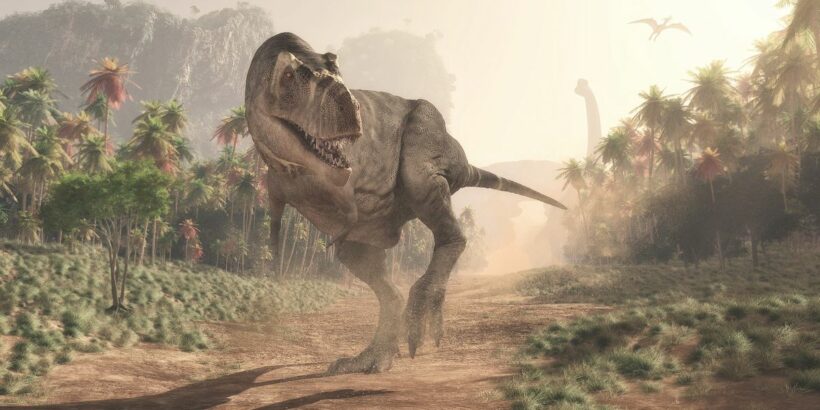 Baby tyrannosaurs were the size of a Border Collie when they took their first steps, a recent study has found.

The jaw and claw bones were both from embryo tyrannosaurs, and the team found it would have been around three-feet long when born.

The remains are the first-known fossils of T-Rex embryos, and researchers believe it would have had a typical rex protruding jawline when it hatched.

The small size of a baby T-Rex surprised the scientists, given they can reach up to a staggering 40-feet when an adult.

Many may remember the babies hatching in the iconic Jurassic Park series, but researchers said hatchlings must have been the size of a Border Collie dog, writes the BBC.

"These bones are the first window into the early lives of tyrannosaurs, and they teach us about the size and appearance of baby tyrannosaurs," study lead author Dr. Greg Funston of the university's School of GeoSciences said.

"We now know that they would have been the largest hatchlings to ever emerge from eggs and they would have looked remarkably like their parents – both good signs for finding more material in the future," he added.

The boffins say tyrannosaurs once lived in what is now known as North American, on the island continent called Laramidia, 68 to 66 million years ago.

The dinosaurs were known as the dominant carnivores of their time, which has interested popular and scientific fields ever since.

The team created a series of 3D scans from tiny bone fragments they collected to get a picture of the size of the baby dino.

Researchers estimated the size of the T-Rex eggs were 1 inches or 43cm long.

The discovery could lead to recognising T-Rex eggs in the future to gain insight into the nesting habits of the species, scientists have said.

The fragments can give information as to what dramatic changes the dinosaurs went through.

However, only limited bone fragments have been found so far, and this only limits what the team could tell.