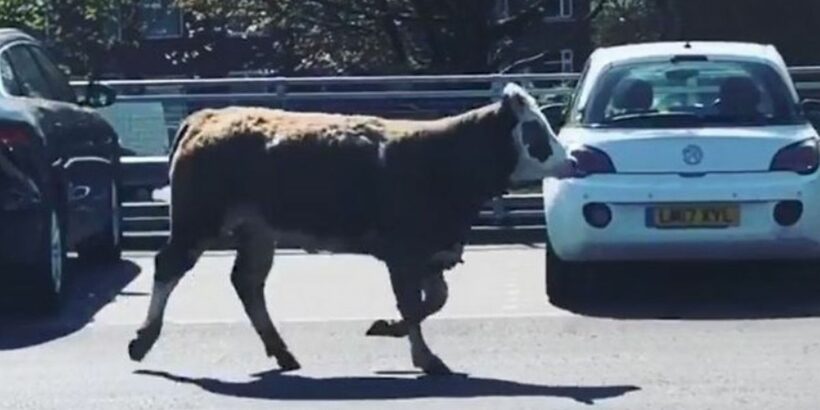 A runaway cow caused a commotion at a Lidl store when it charged through the car park – making people jump backwards out of the way.

A bizarre video, recorded at the Lidl store in Royton, Oldham on Monday (April 26) shows the animal going for a stroll past parked cars and baffled shoppers, Manchester Evening News reports.

"That’s it. Life can’t get any weirder so it’s all gonna get better from now."

In the clip, a man wearing red attempts to grab the cow before hastily jumping back as it runs towards him.

Steve added: "People were starting to approach it which I thought was a terrible idea.

"That guy tried to grab it but, when it came towards him, he completely bottled it.

"He literally forgot everything we’ve ever been taught about bulls and wearing red."

"There was a cow literally just running around, trying to get in the garage where they deliver the food, he continued.

"That would have been an entirely different video had he got into the Lidl!"

Steve said he has been sent photos of the cow outside nearby homes but is trying to figure the mystery of where the bovine sprang from.

"All I keep thinking about is where has that cow come from?" he said.

"If you got a map out, you wouldn’t be able to find a single place nearby that a cow could have possibly come from.

"It’ll be one of those things I’ll think about on my deathbed.

"During my last breath, I'll say to my grandkids: 'I don’t know where that cow came from'.

"The kids will just look at each other and be like, 'I have no clue what he means.'"

It’s believed that the cow has since been safely returned to its owner.