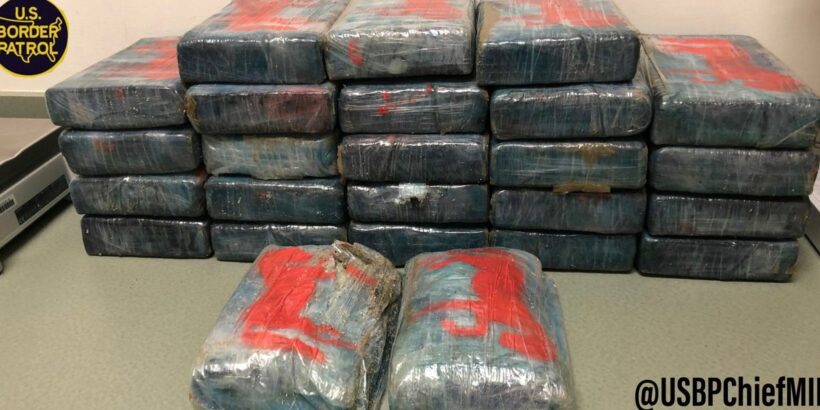 A colossal pile of cocaine washed up on an American beach has been valued at over £1million.

An unsuspecting snorkeler was swimming in the shallows at Palm Beach, South Florida when they came across 25 tightly wrapped packages, on the shoreline.

On closer inspection, the beachgoer suspected the authorities may appreciate hearing about their discovery, and contacted the police.

U.S. Customs and Border Protection has reported that thanks to the snorkeler's tip off, cocaine with a street value of over 1.5 million dollars had been taken off the street – or more specifically, beach.

Sharing a picture of the confiscated cocaine, piled up like bricks, Chief Patrol Agent Thomas G. Martin tweeted on Monday: "Palm Beach, FL; Over the weekend, a beachgoer discovered over 1.5 million dollars worth of cocaine washed-up along the shoreline.

"The package contained 65 lbs. of cocaine & was turned over to U.S. #BorderPatrol custody."

In response to the tweet, someone joked: "Liked and shared. Hope I win."

Last month in nearby Florida Keys, another snorkeler stumbled upon nearly 70lbs of cocaine floating in the water, ABC Action News reports.

In December 2020, another 75lbs of cocaine was found also floating off beach of the Florida Keys.

Cocaine with a staggering street value of up to £50m washed up in the UK in 2017, with National Crime Agency officers responding to a beach near Great Yarmouth, Norfolk.

A member of the public discovered a number of holdalls packed full of the class A drug, The Guardian reported at the time.

Last week Loch Ness Monster hunters insisted a huge skeleton found on a beach in Scotland must be a relative of the famous beast.

The woman who discovered the huge washed up bones, shared a photo of it on Twitter in the hope of getting clues as to what she had seen.

Theories quickly emerged about what animal could have left behind the mysterious bones could have been, with it receiving over 17,000 likes and 1,100 comments.