Bali Nine drug mule Renae Lawrence, who is due to land in Australia next week following more than a decade behind bars in Bali, faces arrest over an alleged high-speed car chase in NSW.

Police claim that Lawrence, 41, stole a car from Sydney's inner west and drove north with fellow Bali Nine member Matthew Norman one month before the drug smugglers were arrested in Indonesia. 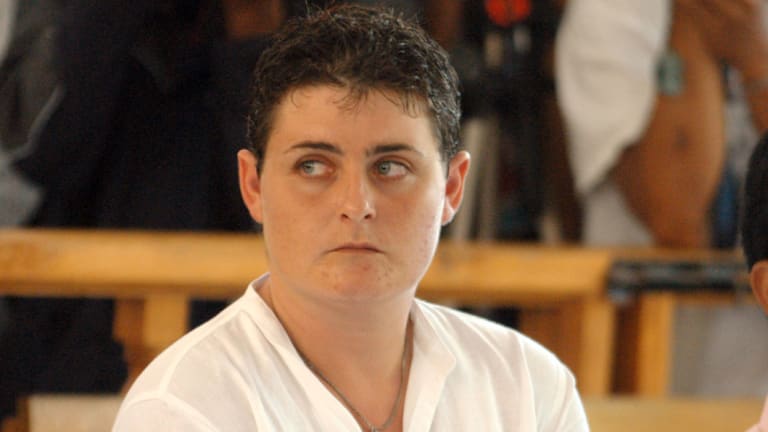 The pursuit allegedly started in Enfield before Lawrence travelled through Turramurra, Mooney Mooney and Peats Ridge on Saturday, March 26, 2005. The car was later stopped by police.

Lawrence has outstanding warrants for offences including motor vehicle theft, unlicensed driving, speeding and failing to comply with police directions.

Two warrants for her arrest were issued at Gosford Local Court, but she was arrested overseas soon after.

Lawrence, who is due to be released from jail on November 21, will be the first member of the Bali Nine drug trafficking group to be freed.

It is likely that she will be deported shortly after.

Lawrence was originally sentenced to life imprisonment for her role as a drug mule in 2005 attempting to smuggle more than 2.6 kilograms of heroin to Australia.

The operation had attempted to bring a total of 8.3 kilograms of heroin out of Indonesia to Australia.

Lawrence's sentence was later reduced to 20 years and has since been further whittled down.

She was originally serving time in the notorious Kerobokan prison, but was then moved to the Negara prison and finally to Bangli prison.

Andrew Chan and Myuran Sukumaran, who were considered to be the ring leaders, were executed on April 29, 2015.

The last member of the Bali Nine, Tan Duc Thanh Nguyen, died of cancer in May this year.

In 2015 – soon after the execution of Chan and Sukumaran – Lawrence told Fairfax Media about how she had been deeply affected by the two men's deaths and about her hope to be released from jail one day.

To deal with the isolation and daily difficulties of prison, she had taken to gardening as a form of therapy.