DHAKA (Reuters) – An alliance of opposition parties in Bangladesh, including the Bangladesh Nationalist Party (BNP), said on Sunday it plans to contest the Dec. 23 general election, despite the ruling Awami League rejecting a series of its demands. 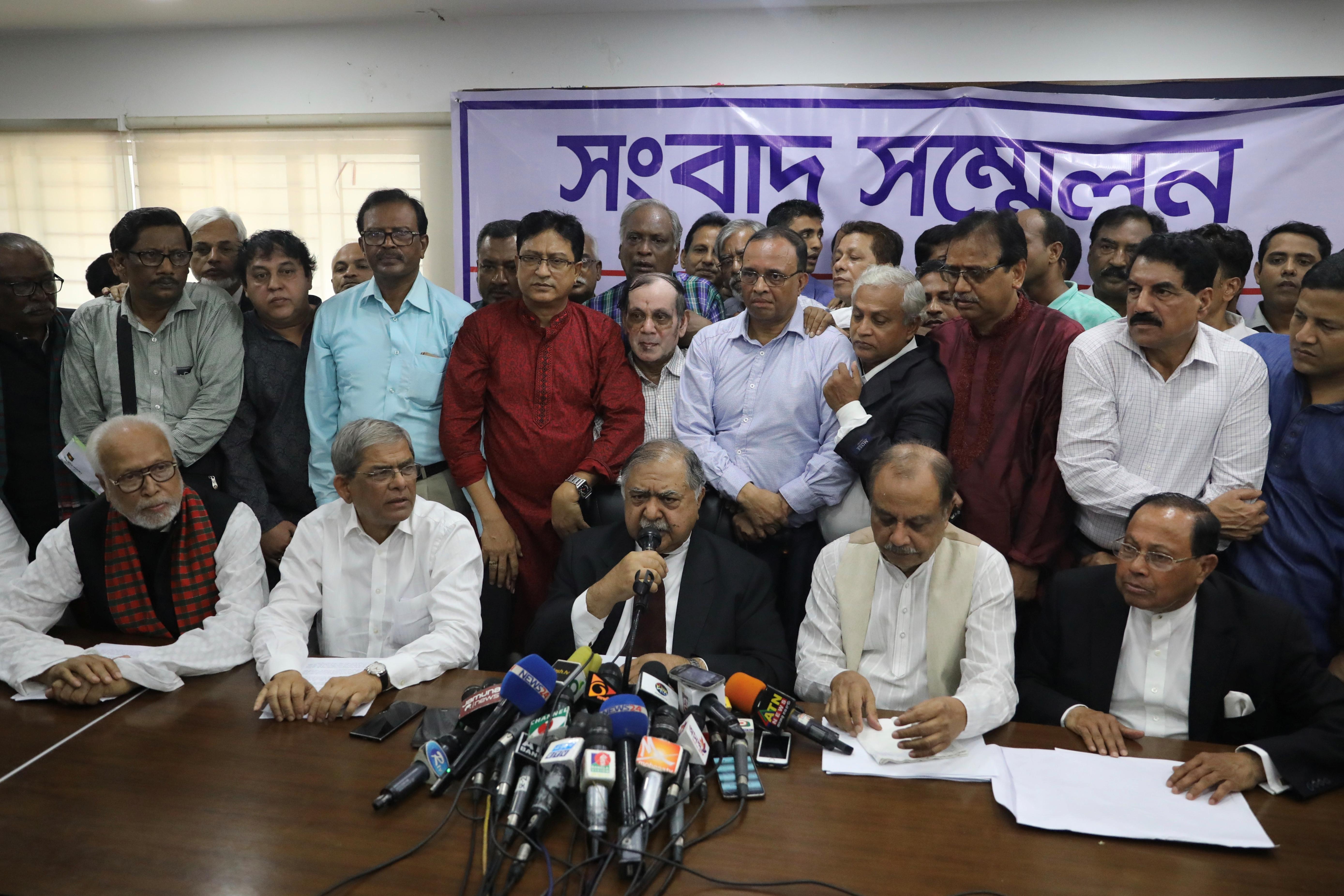 The BNP, which has been one of the two main parties in the country since 1978, boycotted the last election in 2014.

In particular, the Jatiya Oikyafront, a 20-party alliance led by 81-year-old politician and lawyer Dr Kamal Hossain, had wanted a caretaker government to take over in the weeks heading into the polls.

The BNP says a caretaker government is essential for free and fair elections as otherwise it claims the Awami League will use the machinery of government to support its campaign. The Awami League says the demand is unconstitutional.

The BNP, which is in disarray following the jailing on corruption charges of its chief, former prime minister Khaleda Zia, had also pressed for a caretaker government at the 2014 election and pulled out after the demand was not met.

The last election was marred by deadly violence and shunned by international observers as flawed.

Prime Minister Sheikh Hasina and Khaleda, who between them have ruled Bangladesh for decades, are bitter rivals and the BNP says its leader has been jailed on trumped-up charges to keep her out of politics.

Hasina is seeking to be reelected for a third successive term.

“With the aim of rescuing democracy and a continuation of the movement to sustain a democratic process, Jatiya Oikyafront decided to participate in the election,” Hossain said in a statement, following days of deliberation with alliance members.

The alliance will fight for all 300 directly elected seats in parliament. Hossain has said he will not be seeking public office so it is unclear who would become prime minister if the alliance were to win the election.

Hasina’s government has won global plaudits for letting in hundreds of thousands of Rohingya refugees who fled persecution in Myanmar, but its critics have decried Hasina’s increasingly authoritarian rule. In particular, they have attacked her for the government’s heavy-handed handling of student protests this year and its crackdown on free speech.

The opposition says that it has been told it will be able to hold public meetings but alliance officials say that in practice they fear that their applications for assemblies will be rejected or the gatherings disrupted.

Hossain said that mass detentions of activists ahead of a meeting had been one such disruptive tactic used by the authorities.

Although, freedom of assembly is a right in Bangladesh’s constitution, the authorities often prevent protests and meetings from taking place in the interests of national security and maintaining public order.

Hossain asked the government to delay the election by a month to give it more time in which to campaign but the request is unlikely to be granted.

Hasina and the Awami League have the backing of most media in Bangladesh, including all the major TV stations.

He said there could be delays in granting permission while safety and security is assessed.

He said that the election schedule is in the hands of an independent Election Commission. 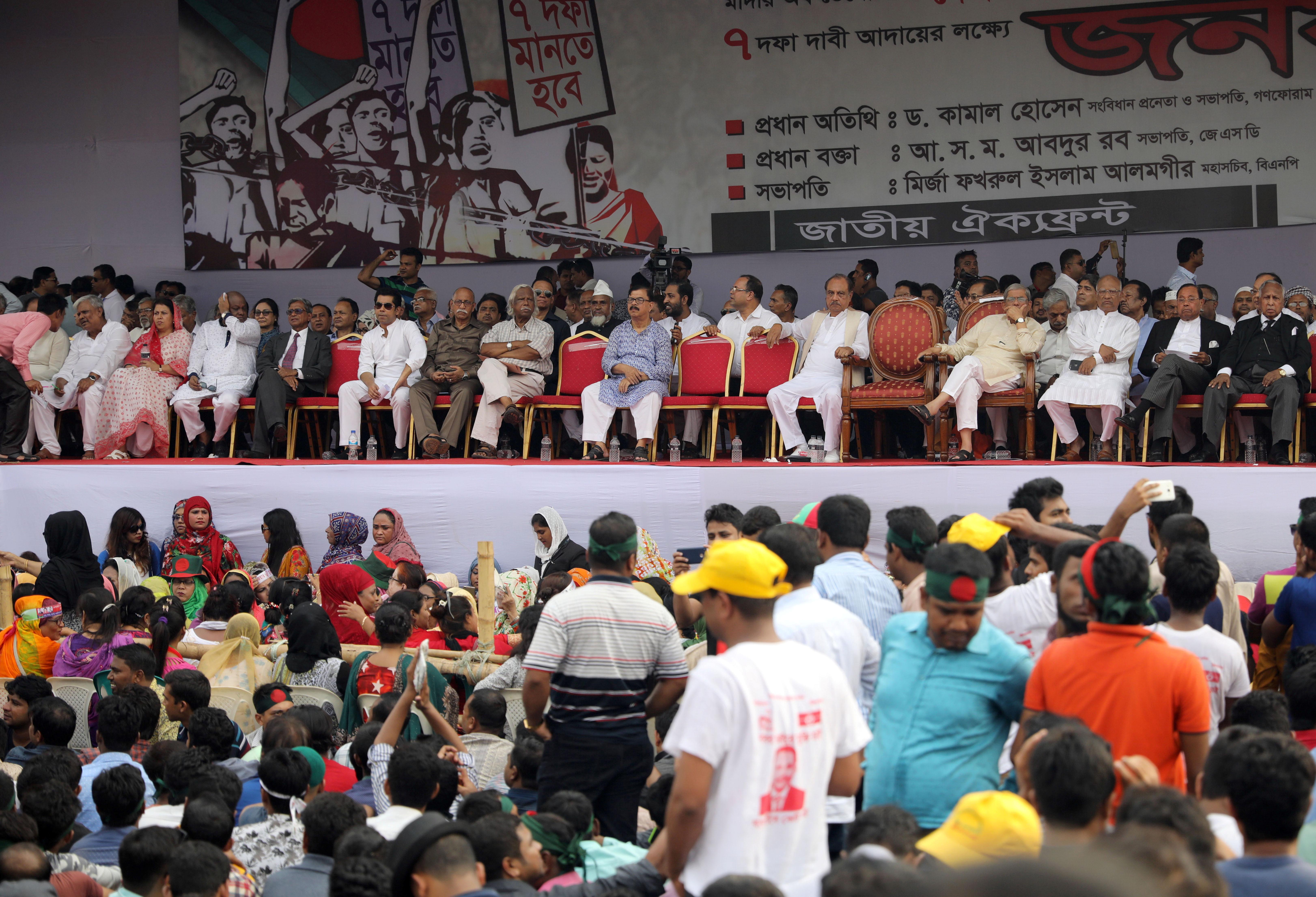 The Oxford-educated Hossain served in Bangladesh’s first post-independence government between 1972 and 1975 as law, foreign and energy minister. He also led the process that produced the nation’s constitution.

He has fallen out with Hasina and the Awami League and runs the Gono Forum (“Forum of the Masses”) party.

He has been highly critical of Hasina’s human rights record and has defended in court jailed photographer Shahidul Alam, who was arrested for comments he made on social media during the student protests.