Put the umbrellas away and get out the sunscreen: Bank Holiday Monday is set to be hottest in 20 years with temperatures soaring to 77F

Brighter skies are on the horizon as this Bank Holiday Monday is set to be the hottest in nearly 20 years with temperatures soaring to 77F (25C).

Although the week started out dreary, as a month’s worth of rain fell on Monday, most of Britain will have warm weather and see the sun emerge for the long weekend.

The sunny start to the week is set to become the hottest May Bank Holiday Monday in nearly two decades, beating out the record of 74F (23.6C) in May 1999.

The hottest weekend on record for the May holiday weekend occurred in May 1995, when temperatures climbed to a sizzling 83F (28.6C). 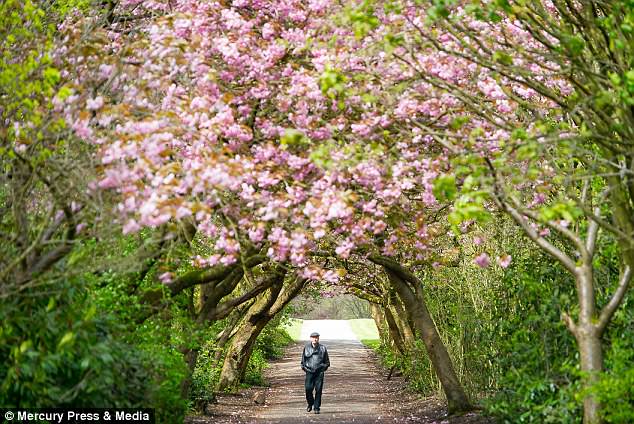 Brighter skies are on the horizon as this Bank Holiday Monday is set to be the hottest in nearly 20 years with temperatures soaring to 77F (25C). Pictured: A man taking a stroll in Manchester on Wednesday 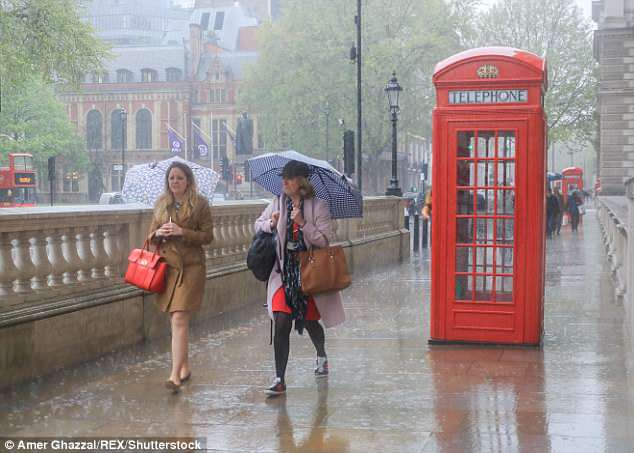 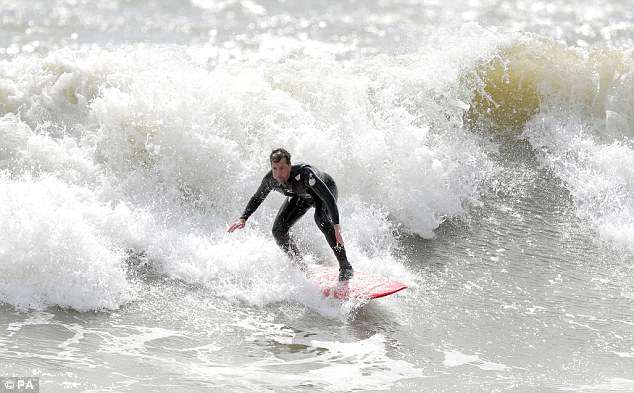 Although the week started out dreary, with a month’s worth of rain falling on Monday, most of Britain will see the sun and warm weather for the long weekend. Pictured: A surfer in West Sussex on Wednesday

Most parts of England and Wales will have sunny spells and warm weather, as temperatures will hit between 66F to 68F (19C – 20C).

However, it could prove misty around coasts in the south and the west, according to the Met Office. Scotland and Northern Ireland will also see cooler temperatures.

Met Office forecaster Sophie Yeomans said to the Standard: ‘There will be a general increase in temperatures in the south east [this weekend] with some warmer temperatures.

‘Sunday may be a bit better with some clear blue skies. Then maybe highs perhaps reaching 25C.’

Ms Yeomans warned that with the weekend still being a few days away, the forecasts weren’t entirely certain yet. 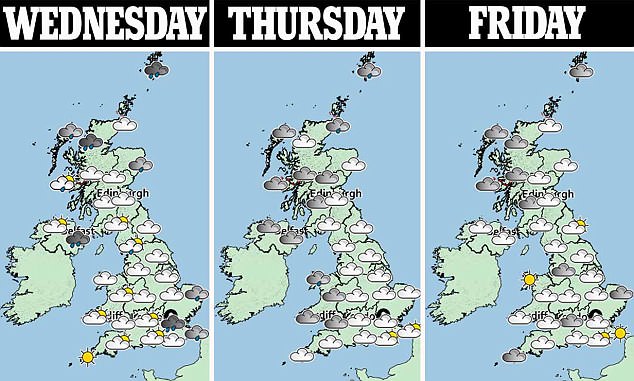 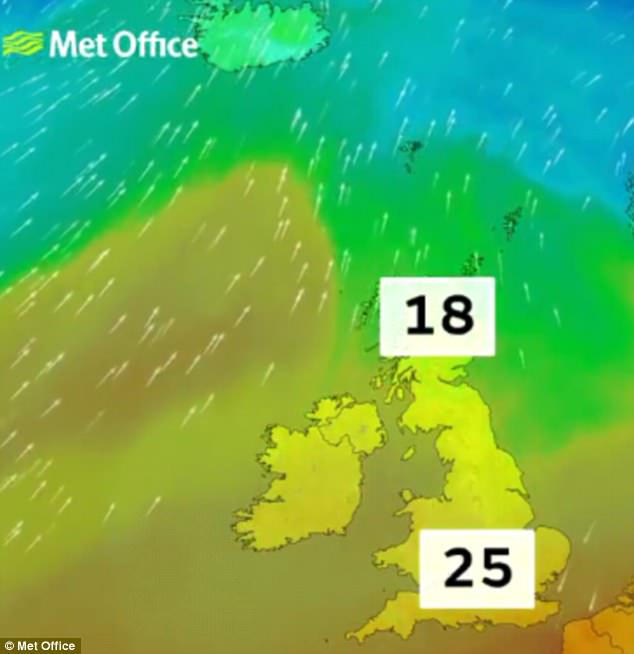 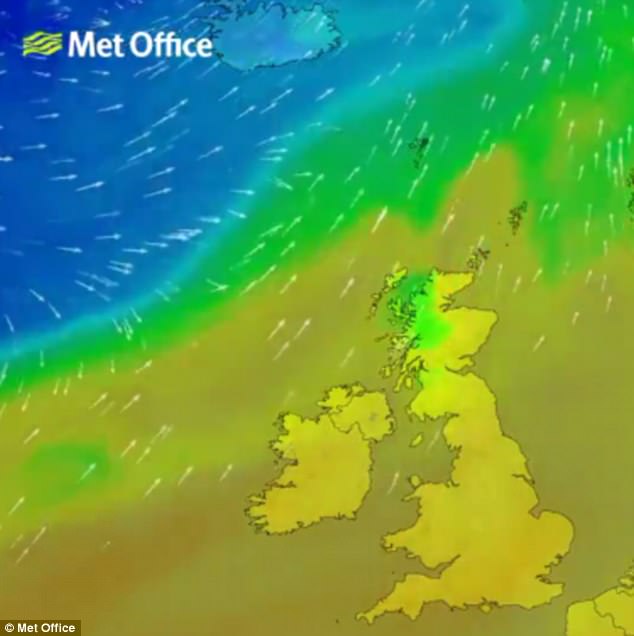 However, it could prove misty around coasts in the south and the west, according to the Met Office. Scotland and Northern Ireland will also see cooler temperatures 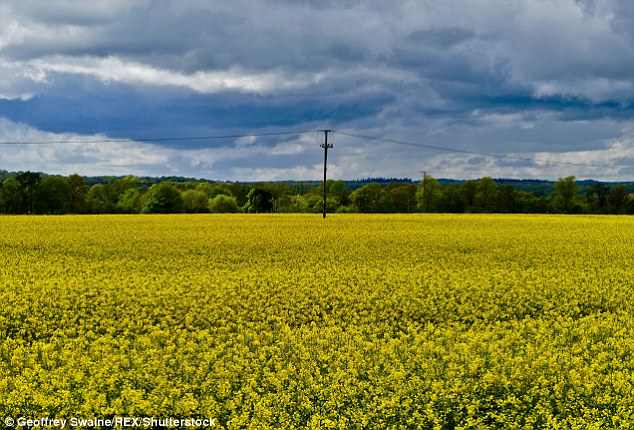 Chris Bulmer, Deputy Chief Meteorologist at the Met Office added in a statement: ‘We can’t promise wall to wall sunshine for everyone this Bank Holiday weekend, however, it’s looking like a most of us will get to see some warm sunshine at times.

‘Parts of Scotland and perhaps Northern Ireland will occasionally be cloudy with some rain, mainly in the west.

‘The best of the sunshine and the highest temperatures this weekend are expected across England and Wales away from the coast. For Bank Holiday Monday itself it is possible that temperatures could be near record-breaking.

‘We’ll keep you updated with the details over the next few days.’

Just two weeks ago Britain enjoyed a heatwave with a top temperature of 29.1C (84.3F) recorded in St James’s Park, London, on April 19, making it the hottest April day since 1949. 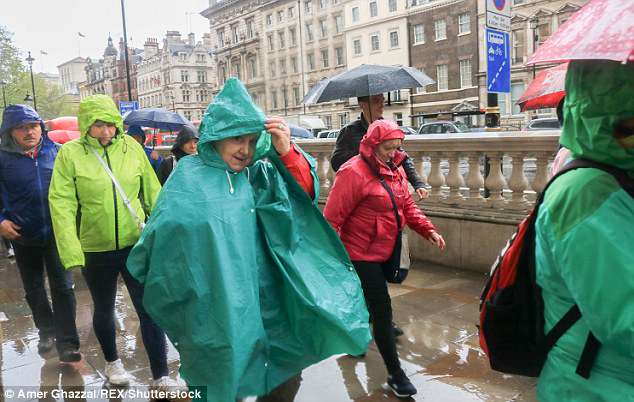 After torrential rain in the area on Wednesday morning, sunny weather has returned to Heaton Park in Manchester 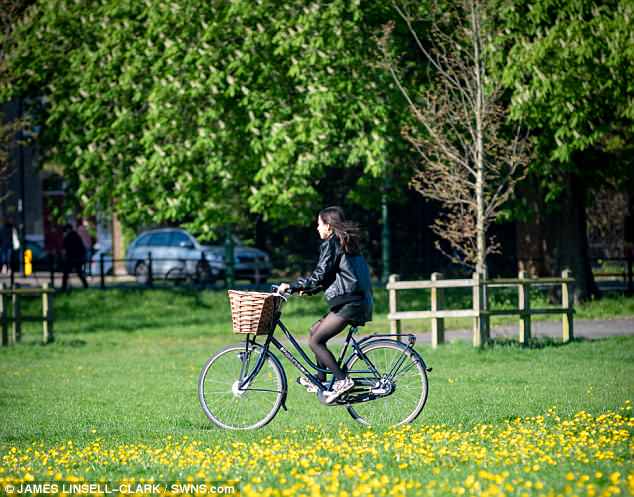 A woman cycles across the grass in Cambridge, with buttercups adding a splash of colour to Midsummer Common on Tuesday

And despite the UK waking up to a dry and chilly start for the past few days Meteorologist Sarah Kent said: ‘For most people Tuesday is going to be a dry day with sunny spells – a very welcome change for those down in the south east,’ she added, revealing temperatures are set to rise into the low and mid teens across the UK.

Despite the wet start to the week, with the bank holiday approaching, Ms Kent said across the south east of the UK it ‘promises at the moment to be dry’ with ‘increasing amounts of sunshine’.