The 58-year-old presenter suffered the blunder in the 24th minute when Uruguay striker Luis Suarez screwed a shot tamely into the side netting.

But Pearce, whose co-commentator Martin Keown also thought it was a goal, declared ‘1-0 Uruguay’ – before quickly clarifying: ‘The referee has disallowed it.’ 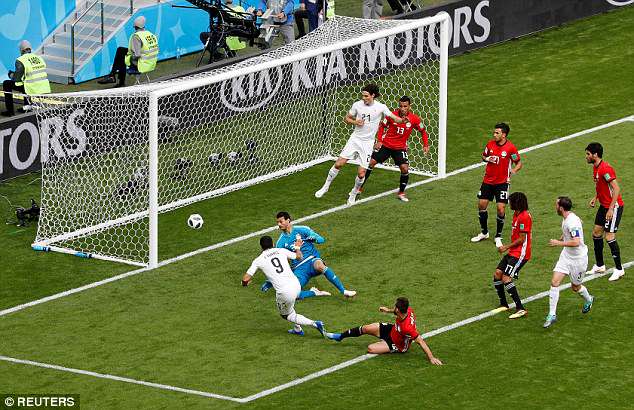 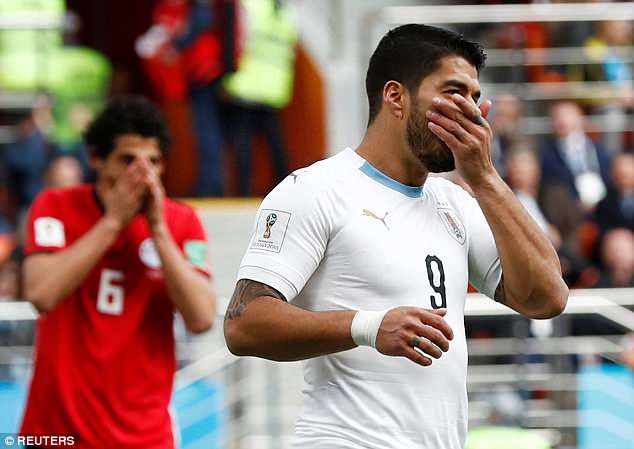 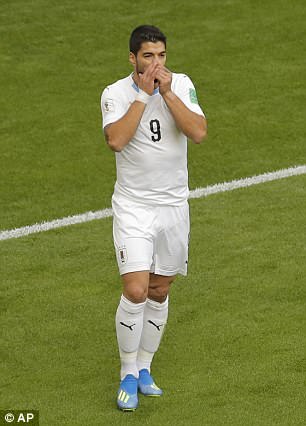 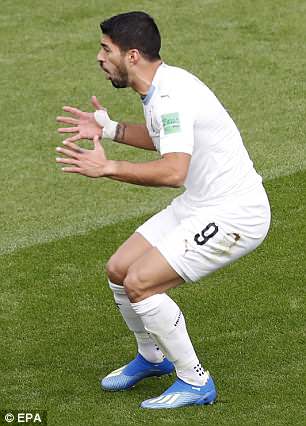 Suarez endured a frustrating afternoon, despite Uruguay winning 1-0 in the 90th minute 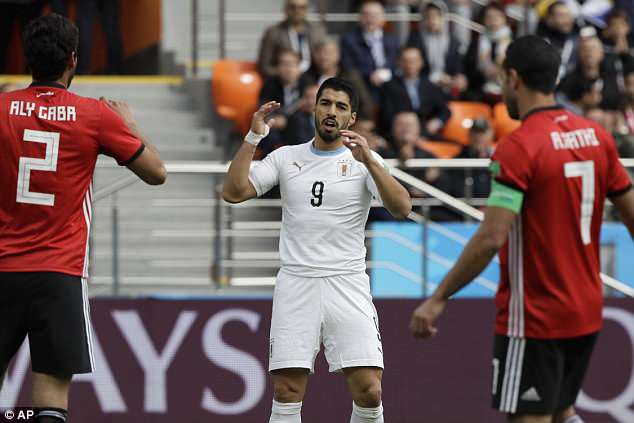 Keown then added: ‘Well, we’re anxious a see a replay on that one. Fantastic ball in by the way, well attacked, just falls at Suarez’s feet, tucks it in.’

But Pearce then realised his mistake, saying: ‘Oh no, side netting, Martin’ – and Keown replied: ‘Oh… wow. It’s a really poor miss isn’t it from there?’

Pearce, who made his name on Robot Wars, continued: ‘From up here, it looked as if it was in’ – and Keown said: ‘Certainly did from here… He can’t believe it.’

Many viewers found the moment hilarious, with one Twitter user saying: ‘Jonathan Pearce has hit top form already… claiming a goal when it hit side-netting.’

Another joked: ‘Get John Motson out of retirement’ – and one said: ‘Jonathan Pearce, the gift that keeps on giving.’ 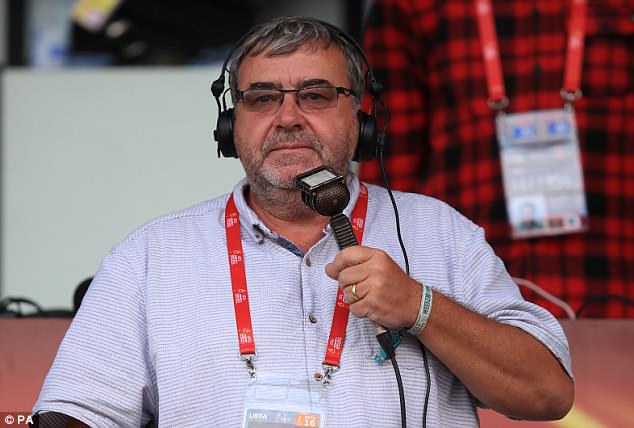 Twitter users enjoyed the moment, with one joking: ‘Get John Motson out of retirement’

But he endured a frustrating afternoon, despite his teammate Jose Gimenez later proving Uruguay’s saviour with a 90th-minute winner in Ekaterinburg.

Jonathan Pearce: ‘Caceres is in there, it’s aimed towards… 1-0 Uruguay… the referee has disallowed it.’

Martin Keown: ‘Well, we’re anxious a see a replay on that one. Fantastic ball in by the way, well attacked, just falls at Suarez’s feel, tucks it in.’

Pearce: ‘Oh no, side netting, Martin.’

Pearce: ‘From up here, it looked as if it was in.’

Keown: ‘Certainly did from here.’

Pearce: ‘He can’t believe it, he hasn’t looked right from the start of this game.’

The South Americans were largely disappointing but late pressure eventually told as defender Gimenez headed in a free-kick to seal a 1-0 win in Group A.

Also on the team for the BBC, which is broadcasting games in 4K Ultra HD, are Phil Neville, Pablo Zabaleta and Jurgen Klinsmann along with Cesc Fabregas.

Bristol City fan Pearce, who lives in Hassocks, West Sussex, is part of the regular Match of the Day commentary team alongside Guy Mowbray and Steve Wilson.

During World Cup 2014 in Brazil, Pearce was ridiculed for a failing to understand the way goal-line technology was being used in a match between France and Honduras.

He appeared confused by a computer animation that first showed ‘no goal’ when the football hit the post, before changing to ‘goal’ when it crossed the line.

It wasn’t until Keown pointed out the final decision to award a goal that Pearce realised what was going on, setting him off on a rant about the technology.

On ITV yesterday, pundit Gary Neville, on loan from Sky Sports, was praised for his strong views on Julen Lopetegui’s sacking by Spain before the opening game.

Neville was seen as a giving a robust summary of how strong the Spanish football federation had been in ‘standing up against a form of bullying’ by Real Madrid .

Host Mark Pougatch was also lauded as a ‘smart mediator’ for his guests Ian Wright, Slaven Bilic and Lee Dixon in a review by Sportsmail’s Jack Gaughan.

Meanwhile viewers have been hitting out at Gary’s brother Phil Neville, who is doing punditry for the BBC – with many criticising his ‘boring’ style.

One viewer said ‘You pay your licence fee and what do the BBC give you? Four weeks of Phil Neville’s punditry. Thanks a lot. He’s send people sleep quicker than a dose of Night Nurse (sic).’

Another tweeted: ‘Phil Neville is such a bore. Literally a poor man’s Gary Neville.’ – and one added: ‘Please get rid of Phil Neville. He’s boring and annoying.’