Forty one years ago this week, as the BBC’s correspondent in Washington DC, I was filming an interview with a lawyer about political corruption when his secretary burst in.

‘Oh my Gaaad,’ she cried, putting her hands to her face. ‘Elvis Presley’s dead!’ 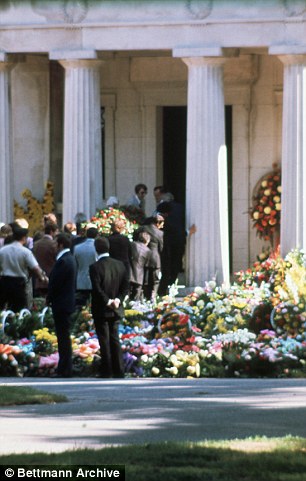 Without a word, my cameraman, Bob Grevemberg, and I packed up and headed to Washington’s National Airport. When we landed in Memphis, Tennessee, it was late.

Elvis Presley’s personal airliner, with a huge treble clef painted on its tail, was parked at the airport.

We drove into Memphis, past the fairground Elvis would often hire for an afternoon so he could take his nine-year-old daughter Lisa Marie on the rides without being pestered by fans.

But strangely, no one in Memphis seemed to be talking about ‘The King’ who had just died in their midst, no one on the streets or gathering on corners.

Early next morning, Bob and I were outside Graceland, Elvis Presley’s mansion. There was no one there either. Stranger still.

Next to the steel gates — also decorated with treble clefs and musical notes — there was a guard house, so I presented my BBC credentials to the gentlemen inside and asked to speak to a member of the Presley family.

As we waited, a few people strolled up. It dawned on me that Elvis was a bigger star in Britain than America. We love nostalgia. The Americans always want what’s new. 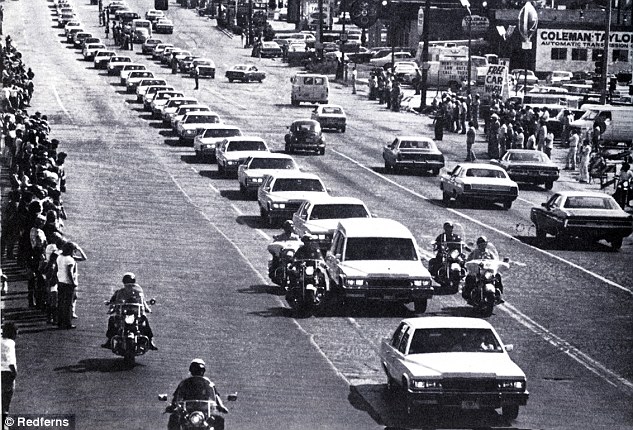 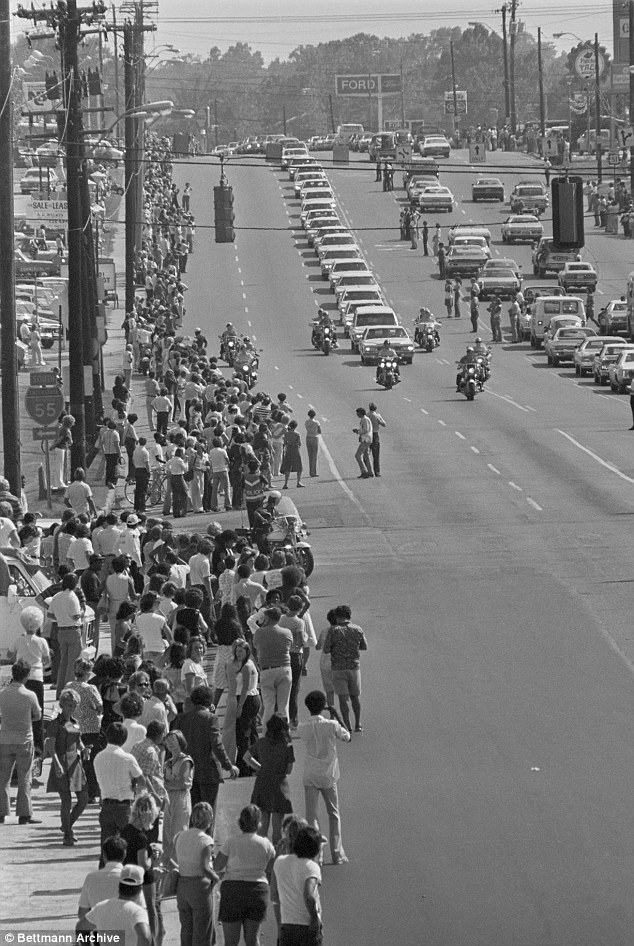 Two hours later, around 70 people had gathered. I was suddenly aware of a very big man wearing a big hat next to me.

‘Mr Cole,’ he said, very firmly, ‘I am the Deputy Sheriff of Memphis. I am commanded by the Presley family to invite you to visit with the deceased.’

I then spotted my business card in his hand. I wasn’t sure I wanted to ‘visit with the deceased’, but, in the interests of journalistic enquiry, I accepted.

The Deputy Sheriff took me by the elbow and began walking me up the serpentine path that climbs a small hill to Graceland, with its white columns and classical pediment.

He ushered me through the doors to a scene I shall never forget.

In the hall, a coffin had been placed on trestles. Behind the coffin, in a sombre arc, stood members of the Presley family, including Elvis’s ex-wife Priscilla, daughter Lisa Marie, and his father Vernon.

One by one, I shook hands with them, extending my arm across the coffin where the greatest singer of the 20th century lay dead at the age of 42. 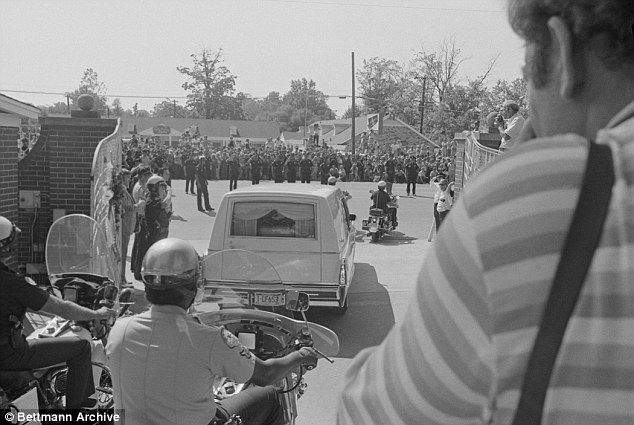 I heard myself expressing condolences on behalf of myself, the BBC, the people of Britain and Elvis fans throughout the world. They smiled and said gracious things.

It turned out I was the first person invited into Graceland — the home Elvis Presley only ever left to perform a concert or make a record — since his death.

How did Elvis look? Not too good. Being English, I didn’t like to stare. But it was such an extraordinary sight, I had to take in every detail.

The most amazing thing was the size of his face. It was the shape of a very large water melon and deathly pale. I guessed drugs had caused the bloating.

He was wearing a black suit, white shirt and an elaborate white satin cravat.

His hair upset me. I’d been an early Elvis fan. As a 13-year-old, my mother bought me a 78 rpm record of Heartbreak Hotel.

We’d heard nothing like that back in 1956. Elvis was the white man who sang like a black man. His tousled hair was part of the rebel appeal.

But in his coffin, Elvis’s hair had been slicked down. A parting had been drawn on the right, as if with a ruler. I heard later the hairdresser was proud of his work.

I felt it was an awful pity Elvis should meet his Maker looking like that. Bob was not allowed to film in the house.

Outside, I interviewed Elvis’s long-time road manager Joe Esposito. I asked about drugs. Joe denied Elvis had taken any. 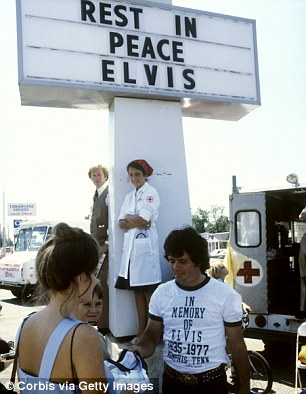 The police and Baptist Memorial Hospital where the body had been taken told the same story.

I concluded that no one in Memphis was going to rat on their most famous resident. Documents later disclosed there were 14 different drugs in his body.

Bob and I walked down to the four-lane highway that runs past Graceland and which is now named Elvis Presley Boulevard.

In the shopping centre opposite, there was a restaurant used by Elvis’s entourage.

The owner of The Beef and Liberty told me Elvis had never set foot inside. He was a virtual prisoner in the house on the hill.

I interviewed a woman who owned a record shop in Georgia. When Elvis was young, she told me, he would sit on her counter, swinging his heels, hoping to sell a few records.

‘He said he wanted to make his mother proud,’ she told me. ‘For him, that was enough.’

We filmed at the grave of Gladys Presley — Elvis’s beloved mother who had died aged 46 — in Forest Hill Cemetery.

(Her son would be interred next to her, until the fear of grave-robbers forced the family to move both graves to a ‘Meditation Garden’ at Graceland, which was opened to the public in 1982.)

We filmed the funeral motorcade; a dozen white Cadillacs, Elvis’s favourite car. By now the Americans had caught up with the rest of the grieving world; 80,000 people lined the streets.

And I reported that there were many people in Memphis who did not believe that Elvis was really dead.

There was speculation, despite statements from doctors and a coroner, that he may have faked his own death and gone into hiding. Regardless, when the job was over, Bob and I flew back to Washington. There were other stories to cover.

Twenty years later, in 1997, I was telephoned by a BBC producer. He said he was making a programme about cults.

Why was he calling me? Because he was investigating the cult of Elvis Presley. I wasn’t aware there was one.

He said there were many thousands of people who believed Elvis was still alive. They revered him. Some worshipped him.

Really, I asked? Yes, he said, they perform candle-lit rituals at Graceland.

Then he really surprised me. ‘We looked through all the newspaper, radio and television coverage when Elvis died,’ he said.

‘We are sure that you, standing in the cemetery, were the first person to report that some people were refusing to believe that he was dead . . . and, well, there have been numerous alleged sightings of him over the years.’

I was interviewed and the programme re-ran my report from 1977. What he didn’t ask was how I could know for sure that it was Elvis in the coffin.

And of course, I couldn’t. I had never seen him in the flesh before that morning.

So, when you next read about Elvis Presley being spotted, aged 83, down at the chip shop or on the Moon, you now know who to blame: Me.

At the very moment Elvis’s coffin was being lowered into its grave at Forest Hill, his latest record went to No 1 in the U.S. and the UK.

Its title? Way Down. Its chorus? ‘Way down, down, way, way on down’. Strange.

Tomorrow, on the anniversary of his death, Elvis fans will be packing 250 cinemas across the UK and Ireland for a special screening of his famous ‘Comeback’ concert in 1968, broadcast by the American NBC network 50 years ago.

After seven years making films, the then 33-year-old had wanted to get back to live music and had never sounded or looked better — relaxed, svelte, dressed top to toe in black leather with the curling lip and piercing stare as provocative as ever.

Diehard fans fell in love with him all over again and it won him a legion of new, younger admirers.

That show was credited with putting him back on top, which is where he stayed until his death was revealed to a shocked world on a sunny afternoon just nine years later.