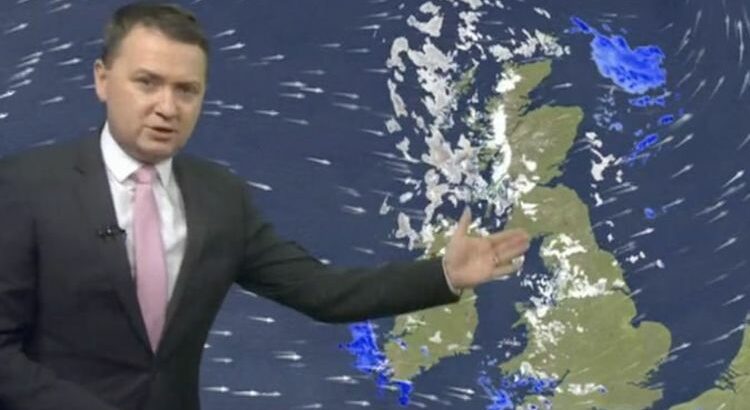 BBC Weather: Cold temperatures for UK with some snow

A freezing blast of Arctic air will grip the UK this weekend, according to the latest BBC weather forecast. BBC meteorologist Matt Taylor told BBC Breakfast viewers that “wintry flurries and a covering of snow” will continue throughout today. This follows warnings of widespread travel disruption and difficult driving conditions.

Mr Taylor said: “Many of you will be waking up to scenes like this, wintry flurries and a covering of snow in a few areas.

“And that is going to continue throughout today, with wintry showers mainly to the north and west and a chilly breeze to go with it.

“The strip of cloud that brought the rain yesterday is out of the way.

“This big lump of cloud coming in from the Atlantic will push in tomorrow, bringing with it some more persistent rain.”

He continued: “In between we have clumps of cloud coming in, producing hail and thunder in places.

“It is quite an icy start for a few this morning. There are a few centimetres of snow, chiefly on the hills but even in lower levels for a time.”

Mr Taylor suggested that eastern areas of the country are likely to stay dry today.

He added that, while thermometers will register 2C to 7C across the country, “it will feel a few degrees cooler than that”.

The BBC weather presenter warned temperatures could “go down to -8C in the middle of the night in some parts of eastern Scotland”.

He added that rain is likely to replace the wintry showers into Saturday and Sunday but temperatures will remain chilly.

The return to wintry conditions follows a record-breaking mild new year, with record temperatures as high as 16.5C in Wales on New Year’s Eve.

Richard Miles, a Met Office spokesperson, said: “We are back to what you would expect in the winter.

Mr Miles said air from the Canadian Arctic was to blame for the abrupt change in temperatures.

He added that wintry snow showers were possible everywhere on Friday and Saturday from mid-Wales upwards.