Britain is set for a chilly weekend, with widespread frost and temperatures as low as -4C expected for Sunday morning. Cold air will strike the UK from the Baltic, but will shift to a warmer direction from the start of next week. BBC Weather presenter Darren Bett said: “We have got cold air heading our way and again we have got this big area of high pressure, this is the dominant feature of the weather. It’s a blocking area of high pressure, nothing is shifting it at all, and we are drawing in colder air around it so it does feel pretty chilly out there.

“The mild air is kept out in the Atlantic or through the Mediterranean.

“So we have got more of the same really to come through this weekend, dry for most places, there will be some sunshine at times.

“But we will probably have a stronger wind this weekend and that will make it feel a bit colder as well.”

The BBC Weather host continued: “Those showers affecting East Anglia throughout the day, maybe one or two getting to the southeast of England, it could be the odd heavier one, maybe a bit of sleet and hail in there too. 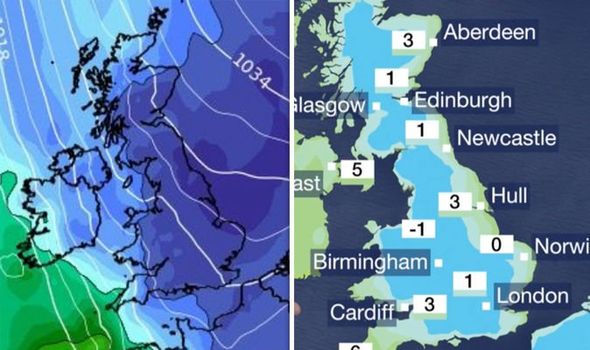 “Probably cloudier across Northern Ireland to western Wales, south-west England and sunshine a bit hazy. Here we will have some strong winds and that will make it feel colder.

“So these are the temperatures we are looking at, 8C, 9C, fairly typically, probably a little higher than that out to the west and the north-west of Scotland, 12C or 13C.

“Now this evening and overnight we see that cloud continuing in Northern Ireland, a bit windy as well in western parts of Wales, south-west of England where there could be some spots of rain.

“But elsewhere the showers retreat back to the coast, skies will clear, to temperatures will fall away very quickly and there will be a widespread frost, could be down to -4C or so by the morning.

“So another cold start if you are up early in the morning. We keep this hazy sunshine and more cloud for Northern Ireland, western parts of Wales and the southwest of England, any rain in the far south-west tending to fade away. One or two showers pecking away at those North Sea coasts.”

Forecasting next week’s temperatures, Mr Bett added: “At the moment our air is coming all the way from the Baltic which is why it’s so cold.

“High pressure still around as we move into next week, changes position slightly, our air comes from Germany and the Czech Republic which is a warmer direction.”