The BBC warned many parts of the Mediterranean would see waves of stormy weather whilst Spain blisters in seating heat. BBC meteorologist Sarah Keith-Lucas explained: “We’ve got some fairly stormy weather across central parts of the Mediterranean at the moment. Expecting to see a lot of heavy rainfall, thunderstorms and some strong winds Bora winds developing through the Adriatic in the day on Tuesday.

“Heavy rain and gusty winds also stretching through the Balkans and across Greece and also for Italy.

“Turkey holds onto another day of sunshine on Tuesday.

“Warm and dry for much of Spain and Portugal – temperatures in Madrid on the up over the next few days.

“It will be 32 degrees Celsius in Madrid on Wednesday. 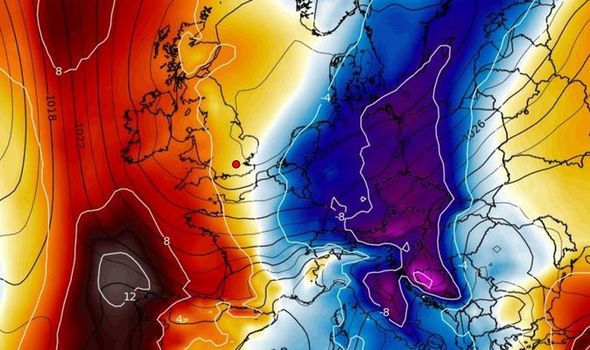 “Dry too for France and much of the UK, with high pressure in charge here.

“So some heavy rain for Romania and Poland as well.

Meanwhile, UK temperatures are expected to rocket this week as the May heatwave strikes the nation bringing with it clear skies and frosty nights, the Met office warned.

BBC Weather’s presenter Carol Kirkwood also explained that temperatures are set to increase even further as the week goes on.

She said: “Top temperatures are up to 20 or 21 Tuesday but on the coast, they are going to be colder not just today but as we go through the rest of the week as well.

“There will be another chilly start tomorrow but with high pressure still in charge, things will stay very settled with a lot of sunshine.

“Top temperatures on Tuesday across Scotland, Northern Ireland and also Northern England away from the coasts we are looking at 22 possibly 23 degrees.”