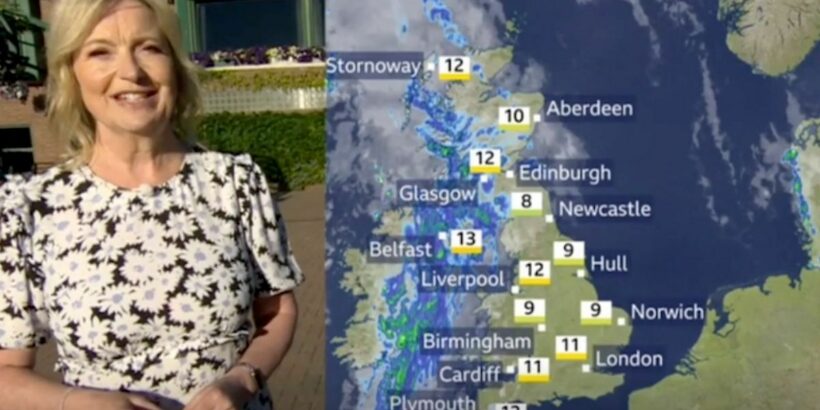 BBC weather forecaster Carol Kirkwood warned as we move through this evening and overnight, “the weather front in the west will push eastwards”, resulting in some “heavy and persistent rain” with temperatures ranging between six and 12C degrees. Referring to today, she forecasted another front coming from the north will bring in “some ticker cloud and more rain” with temperatures not higher than 21C degrees, maybe 22C “somewhere in the southeastern corner”.

Referring to this evening and overnight, Ms Kirkwood warned: “That weather front in the west will slowly push eastwards.

“Some of the rain will be heavy and persistent and the winds are going to pick up in the west, especially with exposure.

“For the east we’ve got clear skies, so here temperatures will fall a bit lower.

“Generally, we’re looking in the range of six of about 12C degrees.” 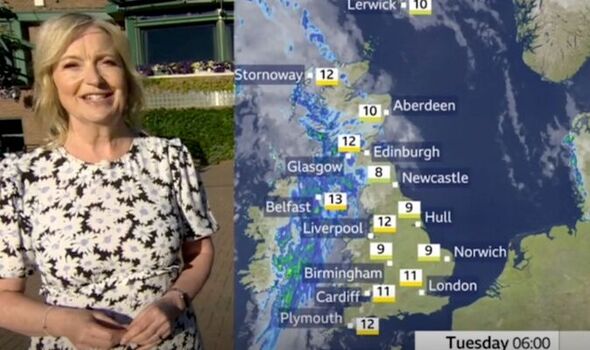 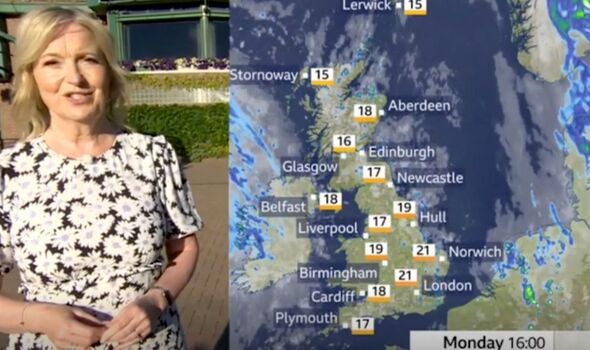 Referring to today’s weather forecast, she added: “Showers will make it to the east.

“That’s what we could see at Wimbledon, then they move away and then later on in the day, another front coming in across the northwest of Scotland and Northern Ireland will introduce some thicker cloud and some more rain.

“In between, however, there will be some sunshine.

“Temperatures today ranging from about 16C to about 21C, maybe 22C somewhere in the southeastern corner.” 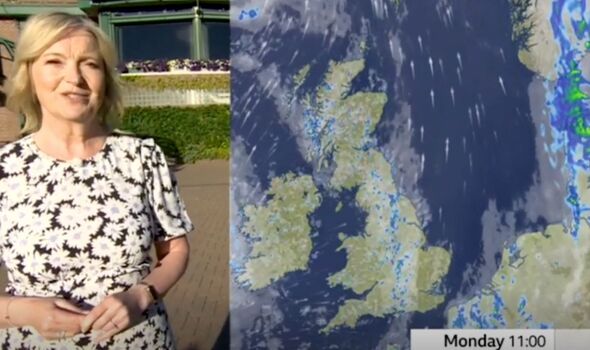 As we head into tomorrow, she forecasted: “We will see a few showers coming in.

“Then the rain will sweet through eventually.

“Behind that, brighting up as well but it’s going to be windy tomorrow.

“Coastal gills in the west with temperatures in the southeast up to 24C, but generally 17C to about 19C degrees.” 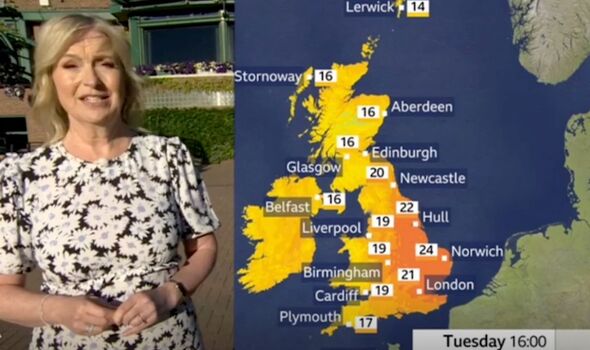 As we go through the overnight period and into Wednesday, she warned: “We’ve got two lines of rain.

“All of them are sweeping eastwards.

“During Wednesday, the firs one clears but we still have the second one in western areas.

“Once again, there’s a chance we could just see spotter rain in the southeast, brightening skies and then we’re looking at some showers.

“Temperatures very similar to what we’re going to see today, so up to the low 20s in the southeast, but generally 17C to about 19C degrees”.