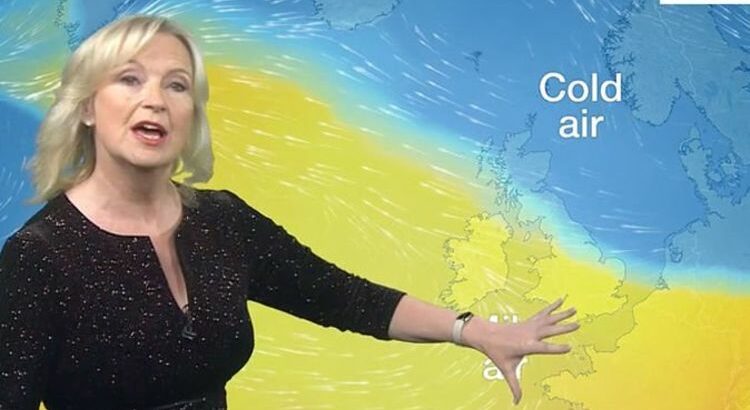 The BBC meteorologist said conditions will be rainy for many across western areas of the UK due to a band of rain slowly making its way across the country. Temperatures will grow colder, with the north of England and Scotland taking the brunt of the Arctic chill slowly digging its way southwards on Christmas Day. Carol Kirkwood also warned snow could be expected in some areas on Boxing Day, especially across northern England.

Ms Kirkwood said: “Quite a lot of cloud across England, Wales and Northern Ireland, clearer skies coming in across Scotland and also Northern England.

“Again, there’s a chance you might see the odd escalated snow flurry.

“If you do, it could well mean we could have some ice to watch out for on untreated surfaces in Scotland and some frost. Temperatures in sheltered Glens in the northeast potentially to -6C or -7C.

“In the south, we’re hanging on to the milder conditions. As we head on into Christmas Day itself, here’s our weather front, we still have it very much with us, we still have a lot of mild air but the cold air is digging further south in towards northern England.”

The BBC Weather forecaster continued: “We can start off in the morning in northern England and parts of Scotland with some cloud, some wintry showers, they’ll give way to some brighter skies.

“Not all blue skies, there’ll be some cloud looking around and, again, you could see the isolated wintry shower, no more than that.

“Meanwhile, we’ve got this next band of rain across the southwest and moving northeastwards.

“This one could produce some snow on the highest hills in the north of Wales.

“It’s going to be a blustery day wherever you are, gusty winds in the northwest. If you’re going out for a walk after a long lunch, it will feel cold for most, but still mild in the far southwest.”

She added: “And then, for Boxing Day, we can start off with some snow across northern England, southwest Scotland.

“You can see how that travels northwards, most of that will be in the hills.

“And Scotland, some into lower levels. A lot of cloud around but brighter later on in the day in the far southwest.”

The Met Office issued a yellow snow warning for snow to remain in place until 11am on Friday across central Scotland.

The service warned that “some roads and railways likely to be affected with longer journey times by road, bus and train services” due to potentially heavy snowfalls across the area.

Met Deputy Chief Meteorologist, Chris Bulmer, said: “The Christmas period will be a fairly unsettled spell across the UK this year.

“Many will see wet and cloudy conditions as mild air dominates over the south and west of the UK.

“Where this mild air meets colder air trying to sink south there is a chance of some Christmas snow, this looking most likely over the Pennines, however exactly where this boundary will be is still uncertain.

“In the far north cold conditions and clearer skies will bring a more wintry feel. For many areas, a brisk easterly wind will bring a notable wind chill.”