BBC Weather’s Carol Kirkwood warned Britons are in for a chilly start on Tuesday as the cloud is expected to slowly extend through the whole of the UK. The BBC meteorologist noted temperatures today remain below average, reporting some areas of Wales saw thermometers drop to 3C overnight. Ms Kirkwood said: “It’s a cold start of the day, there’s lot of sunshine to start the day with as well but through the course of the day the cloud is going to build.

“The sunshine will turn hazy and later on we will see rain coming in to Northern Ireland and also into western Scotland.

“First thing this morning we do have some showers dotted across the north of Scotland.

“For Northern Ireland, a bright start with some sunshine for you but that’s going to change.” 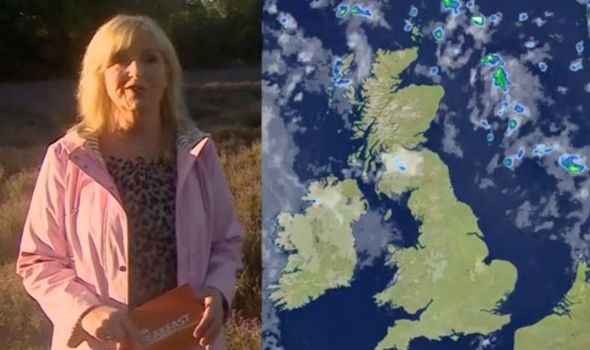 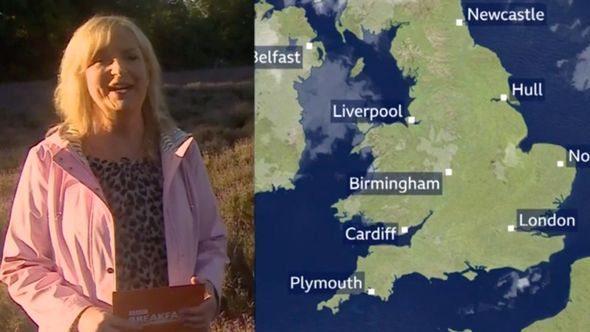 Ms Kirkwood continued: “And for northern England, in fact for much of the rest of England, the Channel Islands and also wales, we’ve got that sunny start but it is a cold one.

“In some rural parts of Wales this morning, temperatures were only 3C but in London it’s 14C and in the sunshine the temperatures will pick up quite quickly.

“As we go through the day a bit more cloud building, turning the sunshine hazy for some us. Areas of cloud as well, the cloud also thickening out to the west across Northern Ireland and also western Scotland.

“And this is where we’ll see the rain across the north of Northern Ireland and western Scotland. 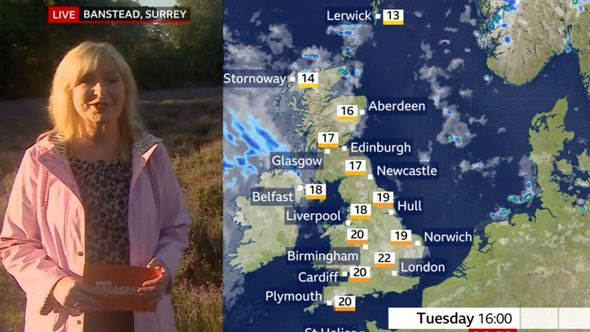 “Temperatures a wee below par today actually. The top temperature is likely to get to 22C in London. At this time of the year, it should be around 24C.”

The BBC meteorlogist forecast the rain slowly building up through Northern Ireland and western Scotland will slowly move overnight to extend through most of Scotland and northern England.

The cloud is expected to remain in control through Wednesday but Ms Kirkwood noted temperatures will rise slightly to reach the season average. 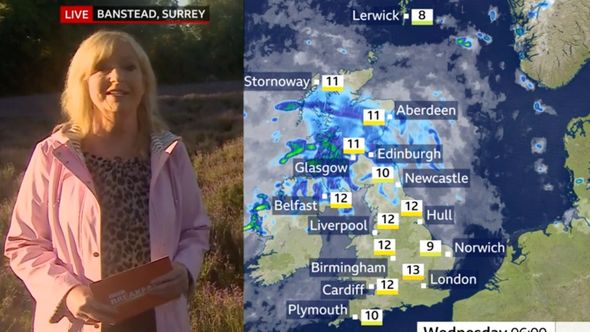 She added: “Through this evening and overnight, that band of rain coming into the west will drift across much of the west of Scotland, Northern Ireland and going through parts of northern England as well.

“It won’t reach the very far north of Scotland and for the rest of England and Wales, we’re looking at some cloud with clear spells as well.

“Tomorrow we pick up that rain crossing northern Scotland, the rest of Scotland, northern England, out of Northern Ireland into the North Sea leaving behind some showery outbreaks of rain.

“To the south of that, a wee bit more of cloud but there is some sunshine and still a lot of dry weather with highs of 22C-23C maybe 24C.”