Europe is braced for thunderstorms and heavy downpours as an Atlantic system pushes its way across the continent. Temperatures will drop in eastern parts of Europe, but will “fair up” for London and Paris over the weekend. BBC Weather presenter Darren Bett said: “The really cold air that we have seen across northern Europe is moving its way eastwards, we’re seeing temperatures dropping in eastern Europe behind that band of cloud there. But out towards the west and the Atlantic this cloud is looming and that’s going to lift the temperatures across northern parts of Europe, bringing with it some rain. That rain could be quite heavy, it will be accompanied by some quite strong winds as well.

“Many eastern parts of Europe turning dry on Wednesday after the rain on Tuesday, but temperatures will not be as high despite some sunshine.

“We have got quite a few showers around the Black Sea into Turkey, more sunshine more widely though for the Balkans and Greece, and much of Italy until you get towards the Alps where it’s wet here.

“Most of the rain should be moving away from Iberia, the wettest of the weather heading up towards central parts of Europe, may well become snow over the tops of the Alps. Still quite chilly conditions there around those Baltic States as well.

“The wetter weather that’s coming in from the Atlantic is going to push its way all the way across eastern parts of Europe, behind that more showery conditions. Mind you, some of those could be heavy and thundery.” 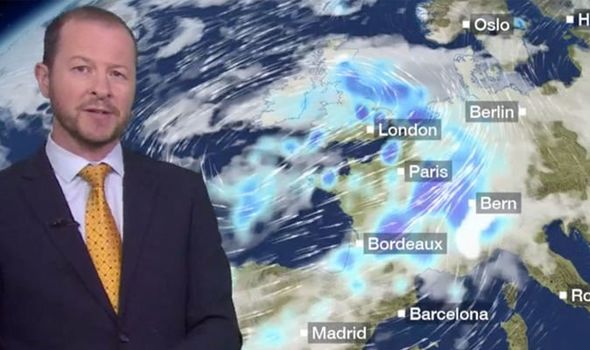 That rain could be quite heavy, it will be accompanied by some quite strong winds

For the long term outlook, the BBC Weather host added: “For much of the time through the Mediterranean though it’s going to be dry, and there will be plenty of sunshine in the outlook for Rome.

It’s going to get hotter this weekend in Madrid. During the weekend we should see the weather fairing up a bit better for London and also for Paris.

“But it’s going to get colder in the outlook for Berlin, temperatures dropping in the rain there in Moscow.”

Meanwhile in the UK, temperatures will “recover” later in the week but remain “pretty chilly” in the meantime.

BBC’s Carol Kirkwood said: “It’s not until later on we see temperatures start to recover – maybe even into next week. Also, we have got quite a bit of cloud across us today but where it is broken in Scotland, for example, it is -6C.

“We have also got some wet snow falling in parts of the Highlands and County Durham. Neither should be problematic.”

The BBC Weather forecaster said there will be some heavy showers across parts of the nation on Tuesday.

She added: “It could possibly be thundery as well. So, in between the showers a lot of sunshine across the north of Scotland. 6C to 8C though, and then as we head further south a lot of showers for northern England, Northern Ireland, and coming in through north Wales, the Midlands and into East Anglia.

“South of the M4 corridor, mostly dry until later when we start to see the cloud build in the southwest, heralding a bit of a change in our weather. And that is in the shape if a new area of low pressure coming our way with its attendant fronts.

“Now, if you have been crying out for rain, it is coming. It is moving in in a northeasterly direction across England, Wales and parts of Scotland. It is going to be accompanied by gusty winds.”