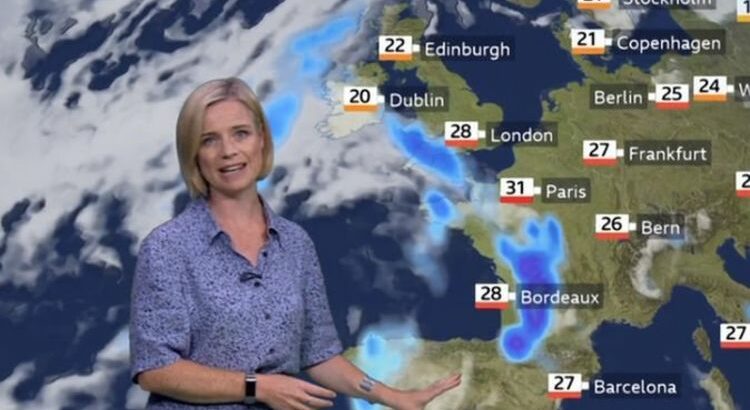 “It’s been quite warm in western areas but that’s about to change; cooler air moving in as low pressure delivers some showers here.

“Further east across Europe high pressure is holding on, lots of dry weather but things have been a little bit cooler for the likes of Moscow, Warsaw for instance.

“That warmer air will be pushing its way eastwards as showers start to roll in towards the UK, France, Portugal and Spain.

“Lots of dry, warm weather in Turkey and Cyprus. A few showers for Greece and southern Italy.

“Mostly dry for much of Spain but showers arriving in Portugal just pushing into the north of Spain.

“France and the UK turning more unsettled through the course of Wednesday.”

She added: “Things turning cooler and unsettled from the West on Thursday.

It comes as temperatures hit up to 30C in parts of the UK on Tuesday as the country enjoys a warm start to September.

The Met Office said some areas were edging close to recording an official heatwave this week as pupils head back to school.

On Monday, the maximum UK temperature was logged at 28.9C in Larkhill, Wiltshire, closely followed by the 28.8C recorded at Santon Downham, Suffolk, and 28.7C at Middle Wallop in Hampshire.

In Wales, the highest temperature was 27.1C at Usk in Monmouthshire, while the mercury reached 24C at Fyvie Castle in Scotland’s Aberdeenshire and 22.2C at Ballywatticock in Northern Ireland.

Greg Dewhurst, a Met Office meteorologist, said central and eastern England were the likely areas that could experience a maximum of 30C on Tuesday.

More widely across England and Wales, conditions will be in the mid-to-high 20s, while Scotland and Northern Ireland could see temperatures around 24C to 25C.

Mr Dewhurst said low pressure moving in from the south west on Wednesday make it “less hot” in parts of Wales and Northern Ireland, but “hot air” will remain in central and eastern England and Scotland, bringing highs of 26C to 29C.

Temperatures will fall later in the week, with an increased risk of some heavy showers.

Mr Dewhurst said central and eastern parts of England were “most likely” to record an official heatwave across Monday to Wednesday, but will only “just about make it”.