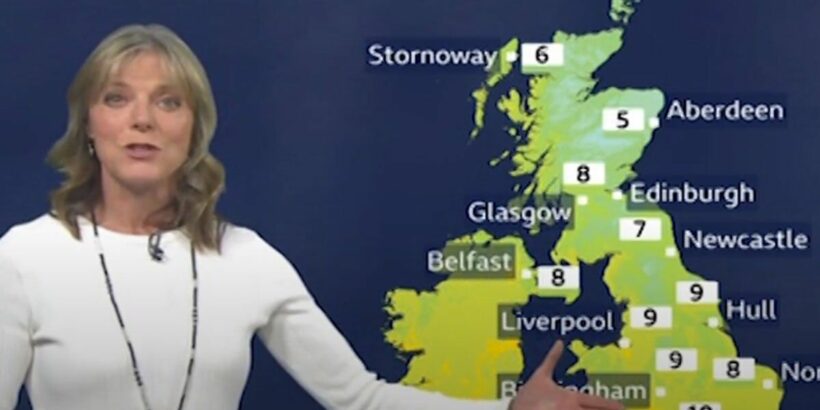 BBC Weather: Thundery spells to dominate ahead of heatwave

BBC Weather’s Louise Lear warned the grey conditions will bring heavy and thundery showers for central England on Tuesday. She said: “Through the night tonight the cloud is going to stay with us and one or two showers as well. But it’s going to be a relatively mild start to our Tuesday morning with maybe the exception of the Northern Isles in the northeast of Scotland.

“But again it’s going to be another cloudy, grey affair.

“Any breaks in the cloud, we will get some warmth which could trigger a few, short sharp showers.

“Some of these across central and northern England could be heavy and possibly thundery as well.

“The highest temperatures may be around 17C, drier but a little bit cooler the further west you are.

“Higher pressure starting to build across England and Wales as we go through the week.”

But the UK is set to be hotter than some top European holiday destinations later this week with forecasters expecting temperatures to hit 21C (69.8F).

Thursday is expected to be the warmest day, with a mixture of sunshine, rain and cloud as the mercury rises between Monday and Wednesday, the Met Office has said.

Parts of the country are set to be warmer than Saint-Tropez, Ibiza and Crete, with many areas in England reaching the low 20s.

However, temperatures are unlikely to surpass the 23.4C (74.12F) recorded at St James’s Park in London last month, which was the hottest day of the year.

Met Office forecaster Simon Partridge told the PA news agency: “This week is a funny old one, there’s a fair bit of rain and cloud around as well as sunny spells, with many areas gradually warming up until Thursday which should be the warmest day,

“Between Monday and Wednesday temperatures will sit in the high teens and low 20s in Wales and central and southern parts of the England, while eastern Scotland could reach 19C (66.2F).

“But in parts of Northern Ireland, northern England and Scotland there will be cloud and some scattered showers.

Met Office hot weather alert: Scorching summer to see 3 MONTHS of heat [INSIGHT]
UK weather: How hot will it get near you this weekend? [ANALYSIS]
UK wildfire warning: Every area with an elevated wildfire risk [VIDEO]

“Thursday will see high teens quite widely across the country, parts of the South East will rise as high as 21C (69.8F), with an outside chance of 22C (71.6F) in areas where there is more sunshine.

“So there’s a warm spell in store for many but don’t expect the wall-to-wall sunshine and blue skies we saw in April.”

The Met Office has said there is an area of high pressure to the south of the UK, while there is low pressure above northern areas.

Many areas will then become cooler from Friday and during the weekend, forecasters predict.