BBC Weather have said Amber weather warnings will remain in place in South Wales as a persistent rainy front unleashes torrential rain across the country. Southwest and northern England will also remain on alert for heavy rain as a cold weather front builds up over Scotland during Saturday, before pushing southwards to England and Wales. BBC Weather forecaster Louise Lear said: “You shouldn’t need an excuse to watch the rugby this morning should you, but you’ve got a perfect one under this cloud and rain.

“It’s pretty miserable, it’s not a day for being out in it. It will start the easy way but we’ve seen a couple of inches through the night to the southwest and into Wales – there’s another couple of inches to come as well.

“To the southeast, an incredibly mild start to our day but it’s all about the rain at the moment, particularly over South Wales where we still have Amber weather warning in place.

“There are other weather warnings in place as well – do look on the Met Office website for further detail.

“Across parts of the southwest, Wales, the Midlands and north of England, that’s where the rain has been so far and it’s going to take it’s time to clear away but it will slip slowly south and east .” 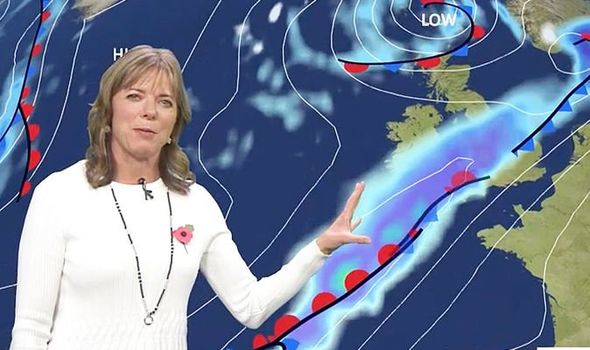 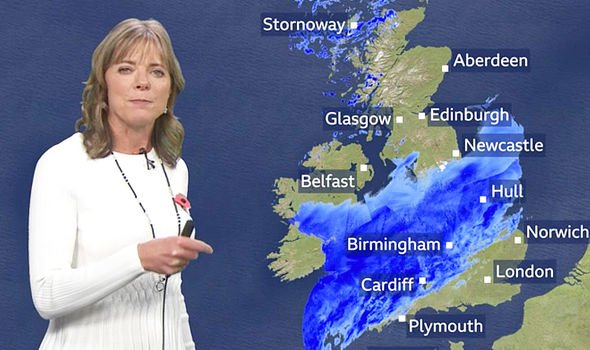 Residents in Wales have been warned the heavy downpours could cause “flooding and transport disruption” as well as “fast flowing or deep floodwater” that could pose a risk to life.

The Met Office warning also forecasts some rural communities could be cut off because of the flooding.

Ms Lear continued: “By contrast, Scotland and Northern Ireland see some lovely spells of sunshine this morning – yes, there are some showers around into the northwest tucked into an area of low pressure.

“It’s going to be pretty windy here and some of these showers, as the cold air starts to kick in, will turn increasingly wintry to tops of higher ground. 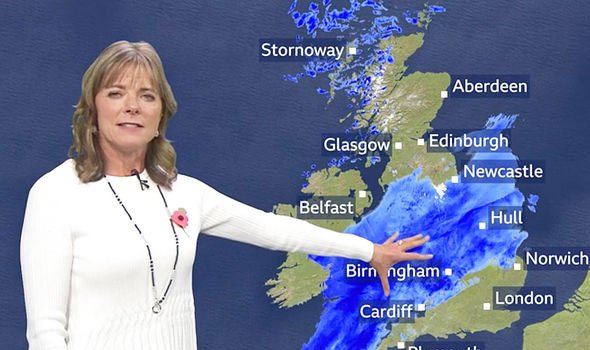 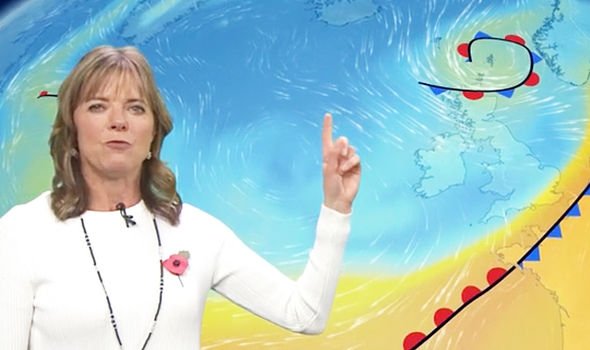 “As we go through the afternoon, it’s going to be windy for all, a slow improvement across northern England, Wales and southwest England as the rain pushes its way southeast.

“Despite that rain arriving late in the afternoon, we are going to stay mild here – 16C to 18C possibly – but colder behind, 7C to 9C.”

The BBC Weather forecaster also said the mild temperatures will slip away alongside part of the rain to allow the colder air Scotland and Northern England have seen over the past few days to move southwards.

She added: “The rain slips south overnight, the cold air starts to push its way across the country, plenty of showers continue to the far north and west. 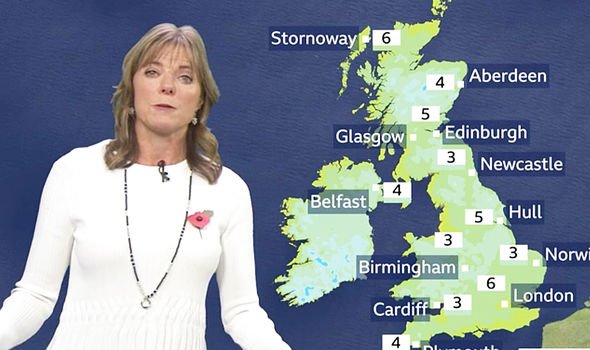 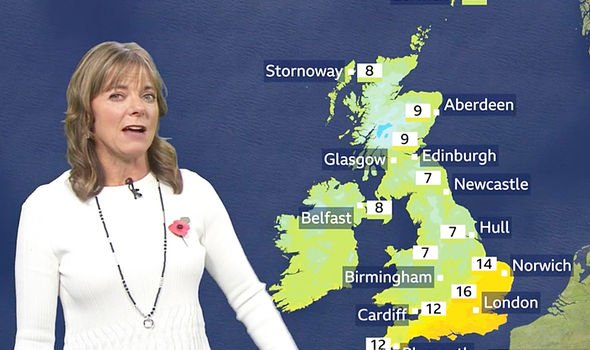 “Really, the talking point when you get out of bed tomorrow morning is going to be the feel of the weather. A noticeable difference, with the blue tones pushing right across the country.

High pressure will remain in control next week driving bitterly cold nights and the risk of morning fog and frost.

Temperatures will hover below average for the time of year as the nation hunkers down for what could be a freezing run-up to winter.

Met Office meteorologist Steven Keates said: “We are going to be a bit below average in terms of temperatures into the start of next week.

“Skies will be clear so it is going to be chilly, we are also going to see winds coming in from the north and the east.

“There will be a risk of frosts in the morning and some early fog.”