The BBC has warned that areas of high pressure are to continue blanketing Britain and western Europe – as well as parts of the Mediterranean, where Cyprus will swelter in astonishing 38 degree heat. But the rest of the continent is seeing the other side of the coin – turbulent low pressure unleashing “damaging winds” across parts of central Europe. BBC meteorologist Stav Danaos said: “Things are looking fine and settled for the next few days across the north of Europe thanks to high pressure.

“But we’ve had very unsettled weather across southeast Europe because an area of low pressure has brought some extremely heavy rainfall to northern Greece into the Balkans.

“Damaging winds in places, and it’s all shifting its way northwest.

“Widespread heavy rain showers and thunderstorms to the southeast of Europe and toward eastern Europe as well.

“Ahead of it it’s scooped up some very warm air. 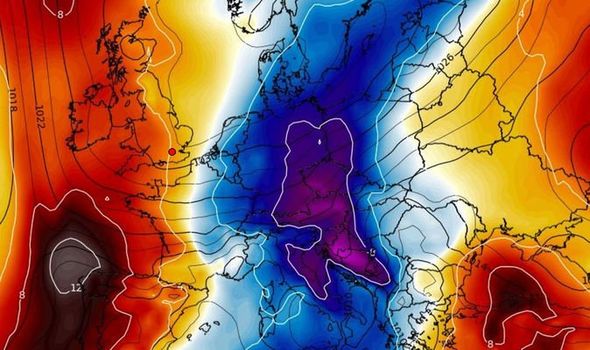 “So we’re looking at temperatures not far off 40C in Nicosia (Cyprus) on Wednesday.

“But temperatures will return a bit closer to normal by the end of the week.

“Hot and sunny for Spain and Portugal – some of that heat pushing on into southwest France.

“High pressure continues to bring fine and settled weather across the northwest of Europe.”

Meanwhile, there will be “strong sunshine” through the week, as the cloud is “held off to bay” out towards the Atlantic.

Forecasting conditions throughout the week, BBC weather presenter Matt Taylor said: “With blue skies dominating and winds light, especially the northern half of the UK, this is where we will see the peak of the temperatures.

“Midweek reaching 24C in some sports of the Highlands.

“Always a little bit cooler further south, and that’s down to the position of the high pressure that’s with us, keeping things dry.