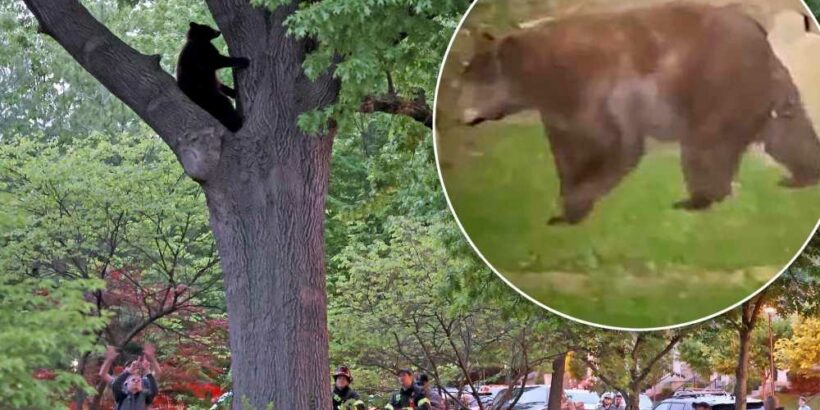 A young black bear who spooked residents in several St. Louis suburbs over the weekend was tranquilized and captured, officials said.

The 150-pound bear was shot late Sunday with a tranquilizer dart as it clung to a tree outside of a home in Richmond Heights.

But the beast didn’t seem fazed at first, climbing higher up on the branches before eventually making its way down, the St. Louis Post-Dispatch reported.

Officials from the Missouri Department of Conservation said the bear – believed be about 18 months to 2 years old – would be tagged prior to being released in a rural area so the animal could be identified if spotted again.

The capture came just one day after Kirkwood police said a bear sighting was confirmed in the St. Louis suburb, as well as in nearby Oakland.

“We are aware of his current whereabouts, as is the Missouri Department of Conservation,” department officials said while warning residents to keep an eye on pets and to not take selfies with the bear. “If you don’t bother him, he won’t bother you.”

Bear sightings were also reported over the weekend in Fenton, Sunset Hills, Webster Groves and Brentwood.

The animal’s appearance in Oakland gave one boy some unexpected excitement ahead of his baseball team’s first game of the season on Saturday.

“Dad! That was a bear!” Drew Boeker, 12, called out as his family was driving to the game, the Post-Dispatch reported.

The boy’s father pulled over and his mother, Laura, watched the bear dash along a fence between Ursuline Academy in Oakland, she told the newspaper in a Facebook message.

Several other cars also pulled off the road to catch a glimpse of the beast, Laura Boeker recalled.

“At first, we thought that it couldn’t really be a bear, maybe a really big dog?!” she continued. “And then it was very obvious it was a bear.”

The bear hopped around like the family’s 40-pound puppy and looked as if it wanted to climb a tree, but was seemingly frightened by the cars, Laura Boeker said.

Boeker also noted that the young omnivore showed up at a private, all-girls Catholic school whose mascot is the bears.

“Ursuline really takes their mascot seriously!” she joked while sharing video of the freak encounter. “Check out this friend we saw running around on campus at 7:30 tonight.”

Some families at the Brentwood Swim and Tennis Club said they spotted the bear Sunday afternoon in nearby woods as they took tennis lessons, KTVI reported.

The Missouri Department of Conservation warned residents to be on alert last week following several reports of bear sightings in Fenton in St. Louis County, as well as in neighboring Jefferson, Franklin and Crawford counties.

There were roughly 840 black bears statewide as of 2019, according to Missouri figures cited by the Post-Dispatch. The population grows about 9 percent each year, the Missouri Department of Conservation said Wednesday.

“The bears have been out of hibernation since spring,” Tom Meister, the agency’s wildlife damage control biologist for the St. Louis region, said in a statement. “Now, they’re hungry. They were dormant for all winter, and they’re looking for food. So, we don’t want to tempt them.”