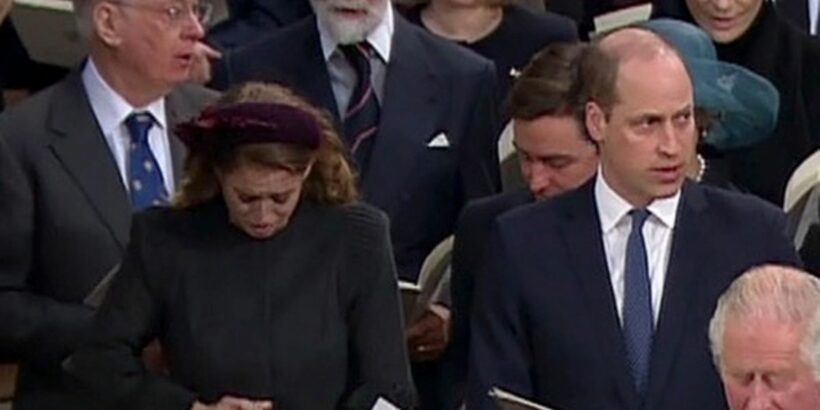 Princess Beatrice has broken down in tears and covered her face with the order of service at Prince Philip's memorial service.

Members of the Royal Family attended the thanksgiving service at Westminster Abbey to celebrate Prince Philip's life, who passed away in April last year at the age of 99.

The Queen was the last to enter the Abbey, escorted by her son, Prince Andrew the Duke of York, Beatrice's father.

It had been feared Her Majesty would not be able to attend due to health concerns, but she was present for her husband's memorial service.

The final decision to attend was made earlier this morning (March 29) and special arrangements were put in place for her comfort.

The service was limited to 40 minutes and the monarch sat in one of the Canada chairs but with an additional cushion.

Shortly after the arrival of her grandmother, Beatrice could be seen reaching into her handbag for a tissue before covering her face with an order of service as she became emotional at the event honouring the Duke of Edinburgh.

She had arrived at the service earlier with her husband Edoardo Mapelli Mozzi and sat next to her sister Princess Eugenie and her husband Jack Brooksbank.

The 33-year-old was also at last year's funeral paying respects to her grandfather, with whom she had a close relationship.

Before his passing, Beatrice shared an important lesson at her last public engagement before his death.

She explained how Philip encouraged her not to become "obsessed with solutions" but to focus on the journey getting there instead as there will always have "twists and turns".