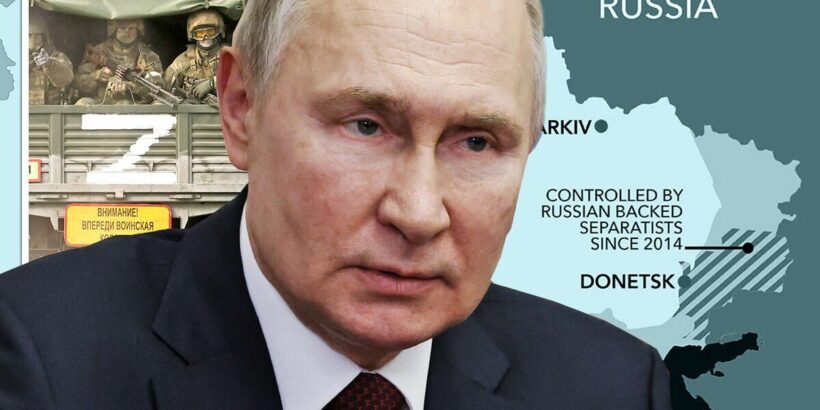 Borne out of the collapse of the Soviet Union, the borders of modern Russia remained mostly fixed for over two decades. In 2014, Russian President Vladimir Putin annexed Crimea from Ukraine, launching a full-scale invasion of the country eight years later. The Kremlin initially believed it could seize the whole of the Ukrainian territory in days, but as the war now approaches its first anniversary, Express.co.uk looks back at a year of gains and losses on both sides.

The fall of the Berlin Wall in 1989 sparked a chain of events that would lead to the dissolution of the Soviet Union just over two years later. On December 31, 1991, the former superpower splintered into 15 independent countries.

Vladimir Putin – a former KGB intelligence officer – assumed leadership of a Russia that was still struggling after almost a decade of embracing Western capitalism in 1999. He has served as either prime minister or president ever since.

In 2014, Russian forces seized the Ukrainian Black Sea peninsula of Crimea. Justified by Putin as necessary to protect ethnic Russians in the region from far-right extremists, the move is widely believed to be a retaliation against Ukraine’s pro-NATO turn – the country’s Kremlin-friendly president having been ousted in a popular uprising just weeks earlier.

The annexation also served as both a signal that Russia under Putin was no longer reeling from Cold War defeat, and as a forewarning of the military aggression towards its Western neighbour to come. On February 24, 2022, Russia launched a full-scale invasion of Ukraine. 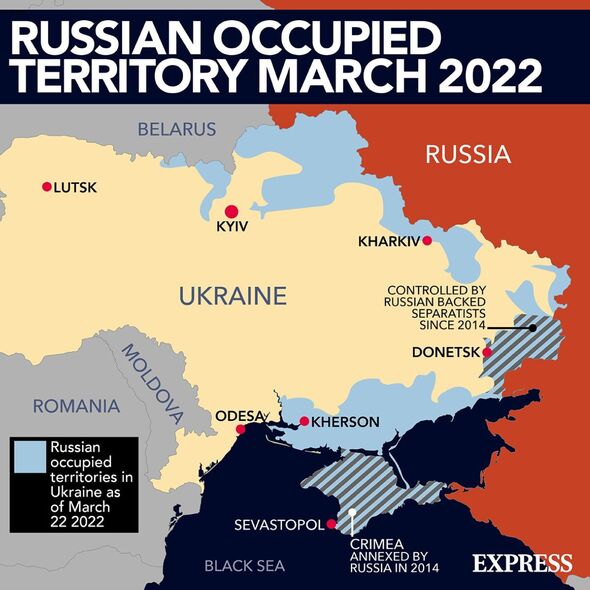 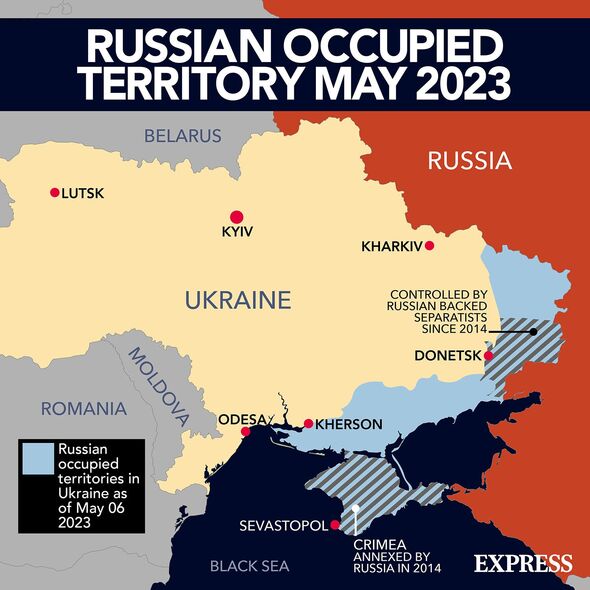 Despite amassing nearly 200,000 troops along the border, the Kremlin denied any plans to attack up to the day before Russian forces breached Ukrainian territory. With troop and artillery numbers dwarfing their opposition, the aggressor made significant early gains.

Russia’s initial push allowed it to secure or advance onto one-fifth of Ukraine’s total area – about 46,000 square miles of the country’s 232,000 total – within just five days. However, expectations of an overrun capital and complete Russian victory in days were quickly shattered by fierce Ukrainian resistance.

Less than a month into the invasion, Russian gains hit their peak of 63,000 square miles – just over a quarter (27 percent) of the country – according to the Institute for the Study of War (ISW). These included swathes of the Eastern regions of Kharkiv, Donetsk, Luhansk and Zaporizhzia as well as the southern region of Kherson.

By early April, Russia had withdrawn from its northern gains to focus on securing the territory it held in the east. Between May and August, although Putin’s forces consolidated their grip on Donbas, the war became one of attrition.

On September 11, Ukrainian forces retook 1,500 square miles overnight, according to the ISW, their largest-ever gains in a single day. In just one week, as the invaders were pushed back ever further towards the border, Ukraine recaptured more territory than Moscow had seized in the previous five months.

On September 30, Putin signed the so-called accession treaties of four Ukrainian regions – Luhansk, Donetsk, Zaporizhzhia and Kherson – unilaterally declaring them a part of Russia. The Kremlin claimed the referenda held showed overwhelming support for joining Russia, but the votes caused an outcry from the international community and reportedly involved the military collecting ballots door-to-door.

Totalling 40,000 square miles – 15 percent of Ukraine’s territory – the annexation was the largest takeover of land in Europe since the Second World War.

On November 11, Ukrainian forces advanced into Kherson, after Russia confirmed its troops had withdrawn from the southern city – the key to the surrounding region of the same name.

In one of the biggest setbacks Putin had suffered since the start of the war, Russia had surrendered the only provincial capital it had captured, alongside multiple strategic positions.

By mid-December, over half of the maximum amount of territory Russia had occupied since February (54 percent) had been taken back, according to the UK Ministry of Defence (MoD).

During a news conference on December 22, Putin dropped the euphemistic “special military operation” and called the invasion a “war” for the first time, saying: “Our goal is not to spin this flywheel of a military conflict, but, on the contrary, to end this war.”

In 2023, with the rightly-named “war” approaching a year old, the latest data from the ISW show Ukraine has liberated just under 30,000 square miles of area from Russian control.

Despite a barrage of missile strikes on New Year’s Eve, including on the capital of Kyiv, US and Ukrainian officials claim Russian artillery fire has gone down by as much as 75 percent in some places, a testament to their increasingly weak position.

Aside from the area surrounding the city of Kherson, the map of Ukraine has changed little over the past few months, the stalemate punctuated by minor victories on either side. On Tuesday, the MoD said Russian troops and mercenary allies were likely in control of the eastern salt mining town of Soledar, although this has been denied by the Ukrainian military.

In a televised meeting with Kremlin officials on Wednesday, Putin admitted the situation in the annexed regions of Ukraine was “difficult in places”.