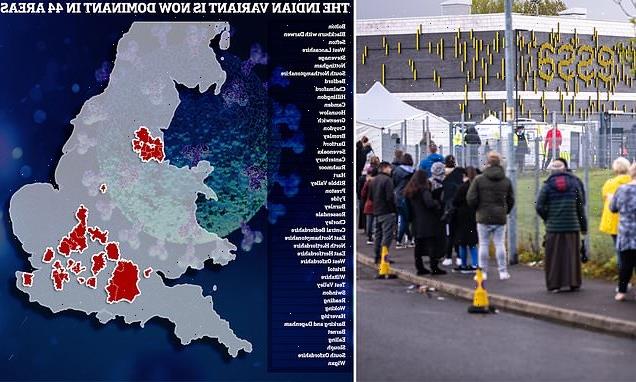 Britons face having to self-isolate for 10 days if they are in close contact with an infected person after June 21 even if they have been fully vaccinated, reports claim.

The threat of having to quarantine will likely undermine plans to return to normality next month, even for those who have received two Covid jabs.

It could also mean a far slower return to the office for some, as a single infection could still spark a mass quarantine of staff, even if most have been vaccinated.

Having a subsequent negative test would not be enough to bring about an end to the quarantine.

Government sources say it is crucial that the contract tracing system stay in place because it is still possible for vaccinated people to pass on coronavirus.

One told The Telegraph: ‘There is still a risk of getting the virus and spreading it on.’

The news comes as the number of people in hospital with coronavirus in Bolton has more than tripled in a fortnight as the Manchester borough grapples with an outbreak of the highly-infectious Indian variant. 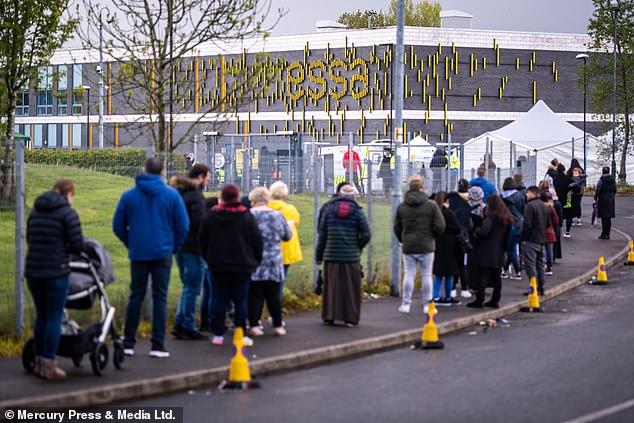 The threat of having to quarantine will likely undermine plans to return to normality next month, even for those who have received two Covid jabs (pictured: People in Bolton queue up for Covid-19 vaccination) 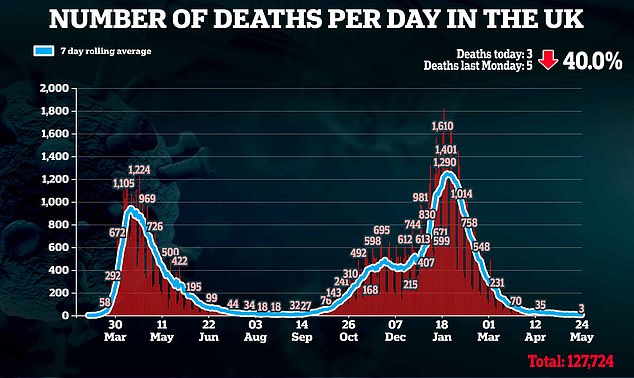 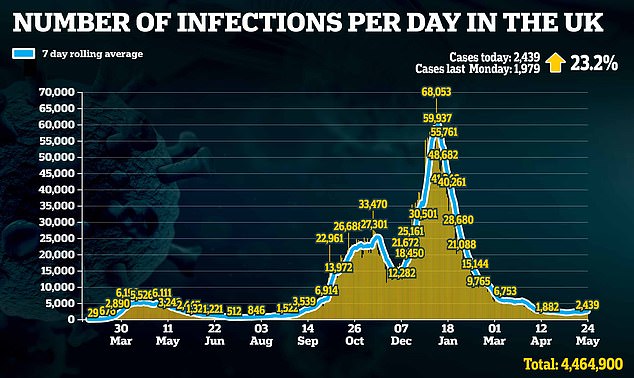 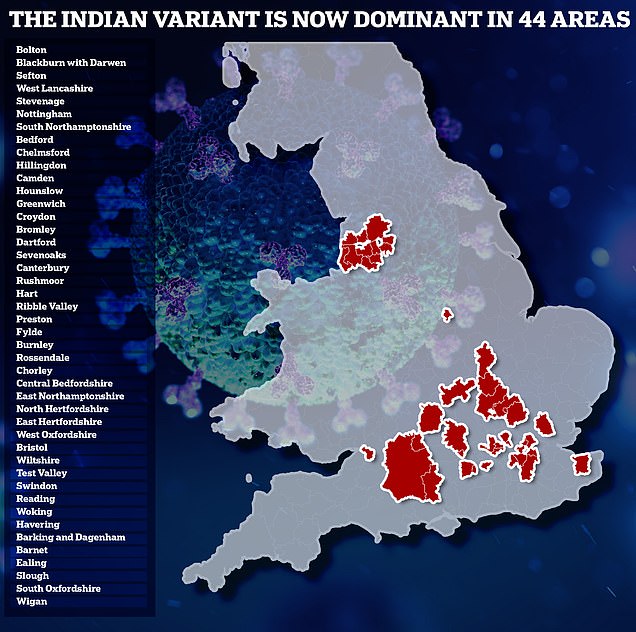 The Indian coronavirus variant is now dominant in 44 areas across England – almost twice as many as the previous week – according to data published by the Sanger Institute today. Of the hotspots, only 19 have seen their infection rates increase in the most recent week

Sources say there are currently 43 Covid patients in the town’s NHS trust, compared to 12 that were receiving care on May 10.

Nearly 9,000 patients died after catching Covid on English hospital wards while being treated for something else

Figures obtained by the Guardian revealed that 32,307 patients have caught the disease while in English hospitals since March 2020, of which 8,747 have died.

Victims were found to have caught the virus while hospital for a range of reasons, including an operation, treatment for an underlying condition or an accident.

Former Health Secretary Jeremy Hunt said hospital-acquired Covid infections and deaths remained ‘one of the silent scandals of this pandemic’, adding that many of them would have been avoidable.

NHS bosses said a lack of testing and personal protective equipment at the start of the pandemic had made hospital-acquired infections harder to prevent.

They also admitted that not fully understanding the extend of asymptomatic spread fuelled outbreaks on wards in the early days of the pandemic.

Nine of the 81 acute hospital trusts which responded to the Freedom of Information request recorded 200 or more deaths.

Experts fear the pressure on the trust, which looks after the Royal Bolton Hospital, will only get worse as the infection rate climbs.

Bolton is recording more than 400 Covid cases per 100,000 people – twenty times the national average – following a period of exponential growth of the Indian variant in the last month.

It takes several weeks for cases to turn into hospitalisations due to the lag between someone catching and falling seriously ill with Covid.

However, Number 10 has said the ‘majority’ of people being hospitalised with the disease currently are either unvaccinated or have not been for both jabs.

Analysis by Public Health England has found two doses of AstraZeneca or Pfizer ‘s jab provide a similar level of protection from the Indian variant as they do for the Kent version, which has raised hopes that hospital and death rates will not reach the peaks of previous waves.

Meanwhile, data published today showed the Indian variant spiralling in Bolton is now dominant in nearly 15 per cent of authorities in England – almost twice as many as the previous week.

Boris Johnson has delayed a review of social distancing restrictions despite warnings from pub bosses that they need the one-metre rule to be scrapped next month if they are to break even.

Boris Johnson had previously said he would publish details of the review – which covers mask-wearing and vaccine passports – by the end of May. But the official Downing Street spokesman said yesterday that this may be delayed until it is known how virulent the Indian variant is.

He added that the review would be published ‘as soon as possible’. A Whitehall source warned last night that if concerns about the Indian variant persist, it could mean continuing with face masks, or continuing the work from home guidance until the autumn.

It came as Emma McClarkin, chief executive of the British Beer and Pub Association, told MPs yesterday that England’s pubs have no chance of ‘starting their journey to recovery’ unless all restrictions are lifted on June 21.

She also warned that if vaccine passports are introduced for pubs, they would cause revenues to tumble by 25 per cent because people would be far less likely to make a spontaneous visit.

Miss McClarkin also pointed out that over the past year, 87 million pints of beer have been thrown away due to the lockdowns.

Mr Johnson has identified the removal of the one-metre rule in pubs and restaurants as his key aim for June 21 because of the potentially huge economic benefit it could bring to the hospitality industry.

Ministers remain hopeful that all remaining social distancing measures can still be lifted that day. But a Whitehall source said other measures – such as the lifting of mask rules – could just be watered down.

‘We have had some good news on the effectiveness of the vaccines on the variant but we still need more data on transmissibility and on the impact on hospitalisations and serious illness,’ the source said. Miss McClarkin told the Commons public administration and constitutional affairs committee: ‘June 21 has to be the date that all restrictions fall away.

‘Any lingering restrictions put at risk the future of many pubs and also our brewers.’ When asked about the possibility that people could have to prove whether they have had the vaccine or a negative Covid test before visiting a pub, she said: ‘It will completely go against the point on spontaneity.

‘You don’t know when you’re going to want to go to the pub but you know that it’s going to be there whenever you need it.

‘If you need a cost on that, it’s about 25 per cent of all revenue, which is an awful lot of money.’

MPs were also told that sporting events that trialled the use of Covid testing passports to allow fans into stadiums saw no ‘significant increased transmission’.