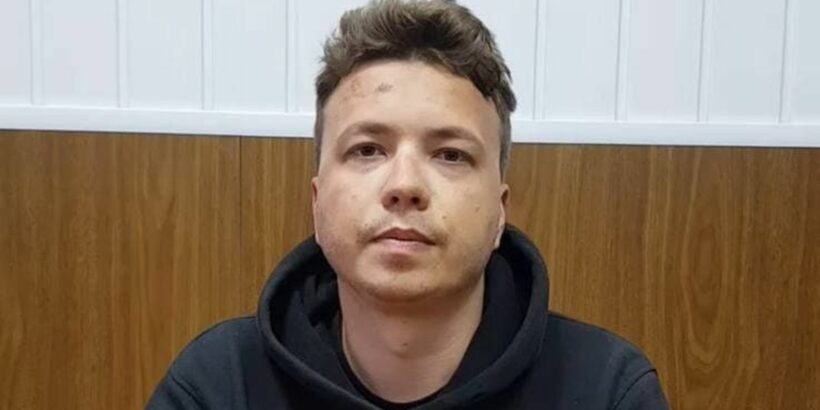 A Belarusian opposition activist who was arrested after the Ryanair plane he was on was diverted to Minsk in a “state-sponsored hijacking” has appeared in a new video.

Journalist Roman Protasevich‘s flight from Athens in Greece was rerouted from its scheduled destination of Vilnius, Lithuania, to the Belarusian capital on the orders of President Alexander Lukashenko.

In the footage released by Belarusian authorities, Mr Protasevich, who is a prominent critic of the dictator and is being held in jail, said he was in good health and admitted helping to organise mass protests in Minsk last year.

Wearing a dark top and with his hands tightly clasped in front of him, he added he was in a pre-trial detention facility in the capital and denied having heart problems which was reported on social media.

Ryanair said Belarusian flight controllers told the crew there was a bomb threat against the aircraft as it was crossing through Belarus airspace on Sunday and ordered it to land.

A Belarusian MiG-29 fighter jet was scrambled to escort the plane in a brazen show of force by Mr Lukashenko, who has ruled the country with an iron fist for over a quarter of a century and has close ties to Russian leader Vladimir Putin.

Belarusian authorities then arrested 26-year-old blogger Mr Protasevich, who ran a popular messaging app that played a key role in helping organise demonstrations against the dictator.

The arrest of the dissident journalist has been strongly condemned by the UK government as well as European nations and the US.

EU leaders are currently meeting to discuss what action to take against the Belarusian regime.

Ryanair boss Michael O’Leary called Sunday’s incident a “state-sponsored hijacking” and claimed agents from Russia’s KGB were also on board.

Mr O’Leary said: “I think it’s very frightening for the crew, for the passengers who were held under armed guard, had their bags searched.”

He told Newstalk: “It was clear it appears that the intent of the Russian authorities was to remove a journalist and his travelling companion.

“We believe there was also some KGB agents offloaded from the aircraft as well.”