My terror in the death zone: BEN FOGLE reveals his terrifying climb of Mount Everest amid the vicious storms and ice fields that have claimed nearly 300 lives in a century

He has rowed the Atlantic and dragged a sledge to the South Pole.

But nothing could have prepared Ben Fogle for the terrifying ordeal of climbing Everest – a five-week trek in the company of a film crew, which brought them face to face with death.

Amid the vicious storms and ice fields that have claimed nearly 300 lives in the past century, it took luck, courage and selfless bravery – as he recounts here, in a truly compelling diary of the hardest journey of his life…

I’d imagined Base Camp would be something sparse – a small huddle of structures amid the rocks and snow, perhaps. Yet there are more tents than Glastonbury and miles of fluttering flags. In fact, there are 300 climbers here already, all acclimatising to the 17,400ft altitude.

This is an extraordinary place – a temporary, mile-long town on the glacier. Everyone is advised to bring their own supplies, but you can buy pretty much anything, including wine, which is not advisable.

You can charge your mobile phone, use the wi-fi, have a shower.

My luggage hadn’t arrived when we left Kathmandu and I confess to Victoria Pendleton, the Olympic cyclist and my glamorous fellow climber on the expedition, that I’ve been wearing the same underpants for the duration. 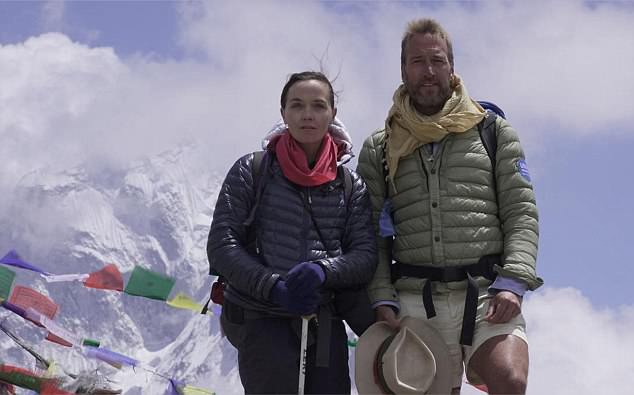 To aid our acclimatisation, we’ve been making repeated climbs part way up the mountain to a height of 24,278ft. We’ve crossed the infamous Khumbu Icefall more than once, negotiating crevasses over ladders lashed together with rope and held in place by ice screws. The ladders bob around like ducks in water as the fierce sun melts the snow. I begin to doubt whether I should be here at all.

Our friend Bear Grylls had told my wife Marina that Everest is too dangerous and that she shouldn’t let me climb it. Five people have already died on the mountain this year. One in 14 people who reach the summit don’t make it home.

Now, after two years of training and anticipation, it sinks in that I could be among them.

I’ve left individual letters for Marina and our two children, Ludo, eight, and Iona, seven, in case I don’t return.

The power of altitude sickness is astonishing. The headaches are crippling. Waves of nausea wash over me.

Victoria is seriously ill and must get off the mountain… fast

Victoria and I have been training for more than two years for this. We’re colleagues, comrades and now firm friends. But here at Camp Two, 21,000ft above sea level, she has fallen seriously ill. Severe altitude sickness means that the oxygen levels in her blood are dangerously low.

At sea level most of us would record a healthy 99 or 100 per cent ‘saturation’. Anything lower than 95 per cent would put you in casualty. Victoria registers at 21 per cent – that’s nearly dead. She must get off the mountain and fast, but she makes me promise to continue the climb.

Fear of failure has been a constant in both our lives.

For all her astonishing success, Victoria was once told she wasn’t big enough or strong enough to be an athlete.

I failed all my exams at school, then I was rejected by all the drama schools I applied for. I even failed my driving test, repeatedly, and instead of a career I had an endless string of jobs.

As she explains to Kenton Cool, our unflappable guide, for all the warnings, this is the first time her body has actually failed her.

We make a rapid descent to Base Camp with extra oxygen for Victoria and she leaves the following day in a helicopter. Tears are shed, but the expedition continues. We wait for a good weather ‘window’ and our attempt on the summit.

An almighty storm – and an SAS man goes missing

We are heading for the summit, but an almighty storm has swept in between Camps Three and Four.

Every step is an effort. Hurricane-force winds threaten to blow us off the mountain. When we reach Camp Four, there is no let-up. The high winds mean we can’t erect our own tents, and we’re forced to sleep in some that have been abandoned by other climbers.

My sleeping bag freezes solid –and the demons set in.

Dramatic stories spread through the camp, tales of fellow climbers struggling, falling and panicking as the storm intensifies.

I hear the chilling news that Ant Middleton, a former sniper with the Special Boat Service and star of SAS: Who Dares Wins, has been lost on his own, separate, attempt to summit. We had been chatting just a few days earlier at Base Camp. Thankfully, after five emotional hours, we learn this is not true. Ant is alive, though battered and bruised – like my confidence.

We sit tight for several days while the storm blows itself out then, in near-perfect weather, the moment arrives. It is time to go.

It’s the dead of night, and we are inching up a 60-degree incline to the Balcony, a point about halfway between Camp Four and the summit. Here, at more than 26,250ft, the air is so thin that most people need oxygen tanks to breathe, and that includes me. But at the start of the ascent towards the South Summit, an even steeper climb, there’s a loud bang. Somehow my oxygen cylinder has exploded.

I’m not injured, but there is no way I can carry on without the precious air supply. With my Everest dream slipping away, I am hugely grateful to one of our Sherpas, Ming Dorjee, who gives me his breathing apparatus and cylinder before returning down the mountain alone without oxygen.

I dismiss it as a one-off accident, a rare fault – until disaster strikes a second time. Now, at 28,200ft, our cameraman’s cylinder goes bang, and this time it is Sherpa Ang Thindu who volunteers his bottle and regulator. (As we would later discover, more than 20 oxygen cylinders failed that same day in the ‘death zone’ above 26,000ft. No one yet knows why.) Anxious, we trudge to the top of the Hillary Step, a 39ft slab of rock just 200ft short of the peak – where there is yet another loud explosion. We’re jinxed.

My second oxygen tank has blown. No helicopters can reach me here – and to say I’m terrified is an understatement.

A Sherpa might get down without oxygen, but I’m not a Sherpa.

I can’t go forward or back. There is no way out. Unbelievably, Kenton hands me his own cylinder and mask, although I’m certain this means he is going to die.

But he remains calm, saying: ‘Go on, I’m going to catch you up.’

From then on, whenever I look around, I see him on his hands and knees crawling up the mountain behind me.

At 4.30am, the sun rises over the mighty Himalayas, and as the cold light crawls down the towering slabs of mountainside we find a Sherpa with spare oxygen.

Kenton is able to carry on. He has reached the summit 12 times, including twice with Sir Ranulph Fiennes, but he has taken an extraordinary risk for me – one that has saved my life.

At 7.30am I stretch myself upright to stand at 29,029ft, the same height as commercial airplanes fly.

I dreamed of this as a child, but I never thought I’d actually stand here. I am on the summit of Everest. In a tearful call to Marina on the satellite phone, I tell her the view is the most beautiful I’ve ever seen.

The Himalayan peaks are ranged below me, picked out in the thin air like toys in a miniature world. I tell her this has been the hardest thing I’ve ever done. I am in tears. It has taken eight days to reach the summit. In places, the fear was almost paralysing. Now I feel as if I’ve been spat from a tornado.

We stay on the summit for an hour, time for a photograph with my children’s good-luck mascots, their beloved soft toys Carrot and Panda, before we start the descent. I look at the camera and say: ‘This is for all those people who were told they couldn’t, they wouldn’t or they shouldn’t.’ This has been the most testing expedition of my life, but the most rewarding. That said, I’m finished with mountains now.

The mountain has changed me – and not all for the better

I don’t know who to hug first. My beautiful family is here at Heathrow and the excitement on the faces of the children is unforgettable. Even Storm, our black Labrador, looks emotional. 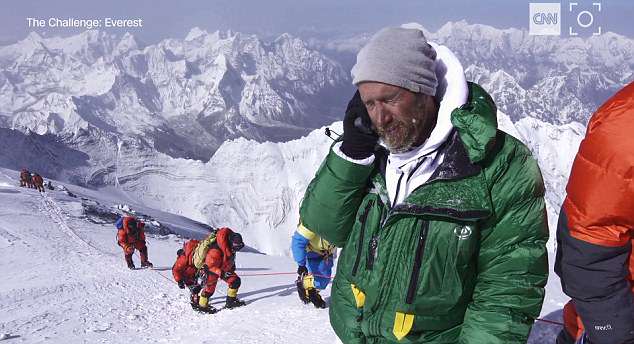 Ben trained for two years for the exhibition.  He is pictured with fellow climbers during it

The first night in a proper bed is bliss, the most luxurious sleep I have ever had. I have lost more than a stone, mostly from my legs, my face is covered in brown wind burn and my greying beard, decorated with old food, looks like Brian Blessed’s. Everything seems so rich and lush and comfortable. I savour the act of turning on a tap and boiling a kettle.

It is bewildering to sit in my back garden watching the Royal Wedding just three days after standing on the summit of Everest. The mountain has changed me, and not all for the better.

I can’t concentrate since returning. I’m forgetful, I use the wrong words and cry at everything. It’s like I’m in a fog – a legacy of the altitude sickness that I hope will fade. But it has been an important reminder of the essence of life.

I climbed Everest for my children, especially my son Willem, stillborn at eight months four years ago. Cradling him to say goodbye, I made a promise to him to live my life brightly, to be positive and to inspire. I really hope this will inspire people to climb their own personal Everest. I promise, it will change your life.

Adapted from The Challenge: Everest, a three-part documentary that will be broadcast on CNN International from June 30.