Racist 55-stone benefits claimant, who is costing the NHS £7,000 a week by taking up four beds, said Muslims should be kicked out of the UK

The racist rants of a 55-stone thug who attacked nurses and police officers surfaced online as he ranted that Muslims should be banned from the UK.

Matthew Crawford, 33, unleashed a tirade of abuse aimed at Polish and Pakistani people as well as saying Islam should be outlawed.

The obese racist has been in a reinforced bed for five months that costs Kings Mill Hospital in Sutton-in-Ashfield thousands each week. 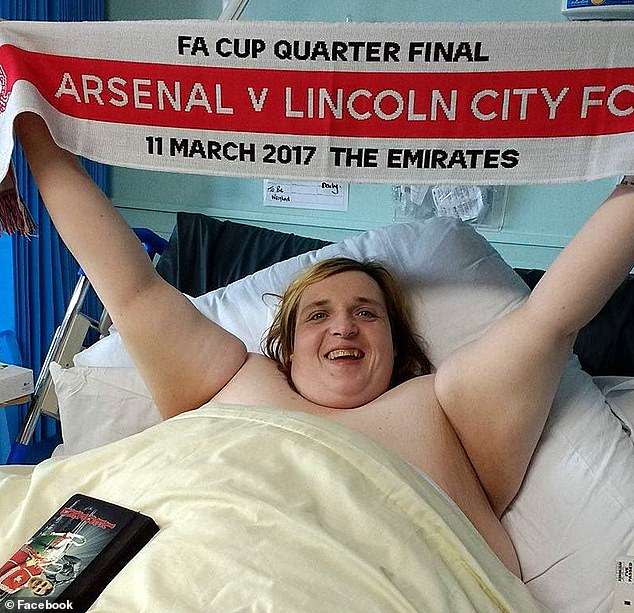 Last year he claimed to have joined the far-right British National Party in one Facebook post, The Sun Online reports.

After Islamist Salman Abedi bombed Manchester Arena, murdering 22 people, Crawford opined: ‘Don’t let anymore of em into the UK and the f***ers who are already here just kick em out don’t give a f*** wether (sic) they was (sic) born here. It’s time Islam was banned in this country.’

He also wrote: ‘Absolutely sick to death of the p***s and the polish (sic) treating streets round us like a race track. Just nearly got knocked down on the zebra crossing be (sic) a bloody p***.’

In other posts he flaunted the spoils of his £650-a-month benefits while costing the NHS £7,000 a week as a bed-blocker in social media posts.

Crawford showed off his 65-inch television and boasted of spending £100 on football away matches while on Employment Support Allowance. The 33-year-old also splashes cash on a Sky Sports package priced at £80 a month. 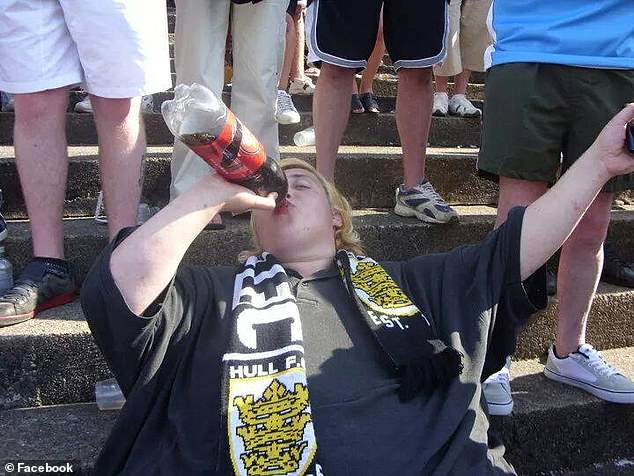 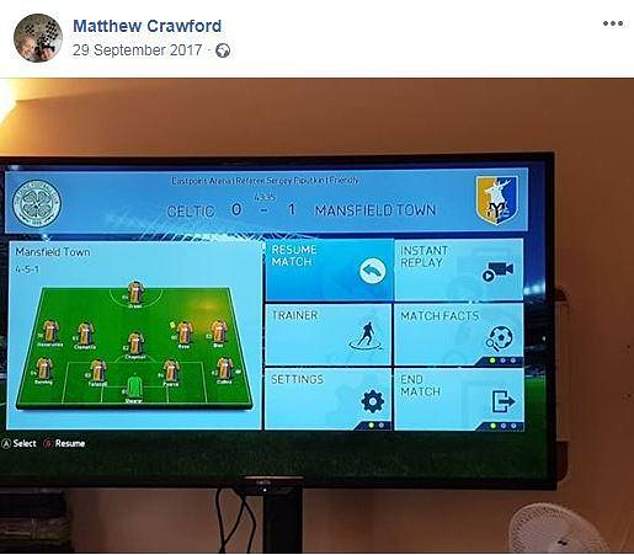 Sources say that he orders takeaway food to the ward in Nottinghamshire and he has posed with a champagne bottle while wearing a hospital gown in the past.

Hospital staff are unable to kick him out – despite him being well enough to leave – because there isn’t a suitable social care space. The care home resident from Ollerton has been claiming disability and other benefits for years. 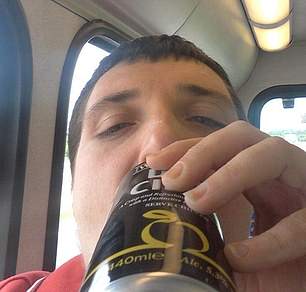 Crawford boasts of splashing £100 on away football matches

He shared pictures of his television on Facebook, ranting that it had been lost along with an XBox One when he moved from one home to another in November 2017.

In another post he whinged that he was paying £80 each month for a Sky Sports subscription that failed to work, leaving him watching a match on his phone.

And he boasted of spending £90 to watch Chesterfield in the EFL final two months later.

His regular trips across northern regions of England are free thanks to his disabled bus pass, according to his social media activity.

Crawford was hauled before court for attacking staff at Pathfinders Neurological Care Centre in Offerton. 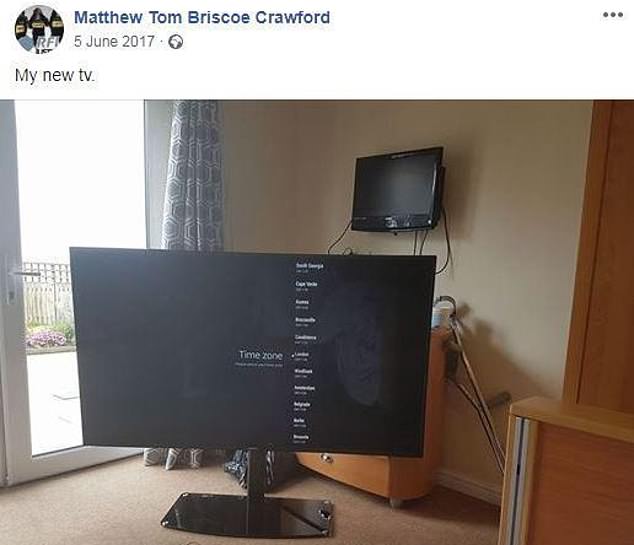 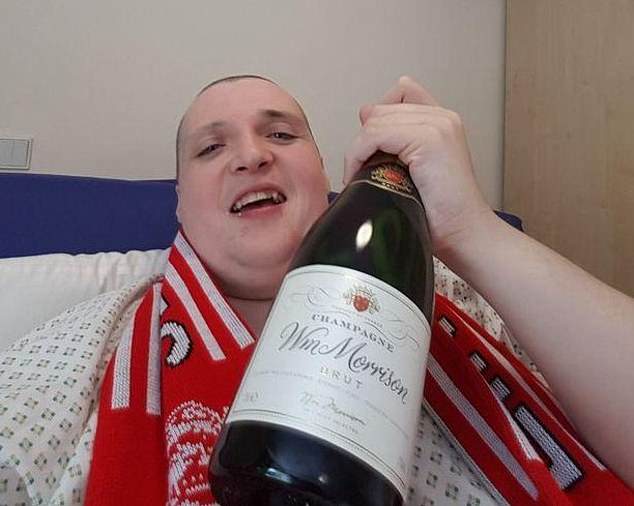 He pleaded guilty to four assaults carried out between July and September last year.

It came after he was convicted of three assaults on police officers as well as a racially aggravated assault in 2016.

Right now he enjoys a four-bed bay all to himself due to the equipment that is needed to move him.

But it hasn’t stopped him complaining about the place, even blaming his takeaway habit on the food he’s offered at the hospital.

‘Just want to set the record straight, I don’t spend all my money on takeaways,’ he previously said. 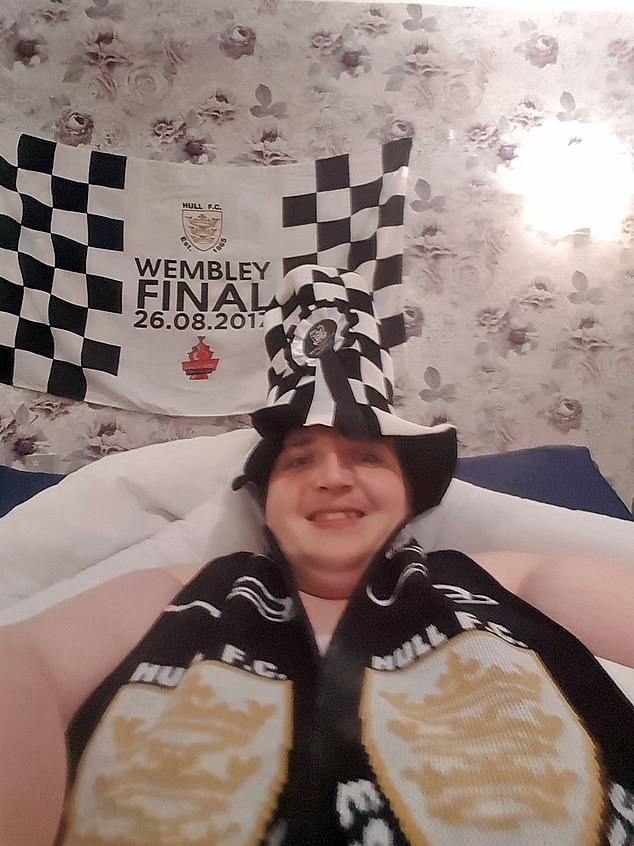 ‘I might get 300 quid a ­fortnight but I spend over 100 quid every fortnight on food shopping. If people tasted the food in this place you would know why I buy my own food.’

He went from being about 30 stone to 55 as his weight ballooned over the past few years.