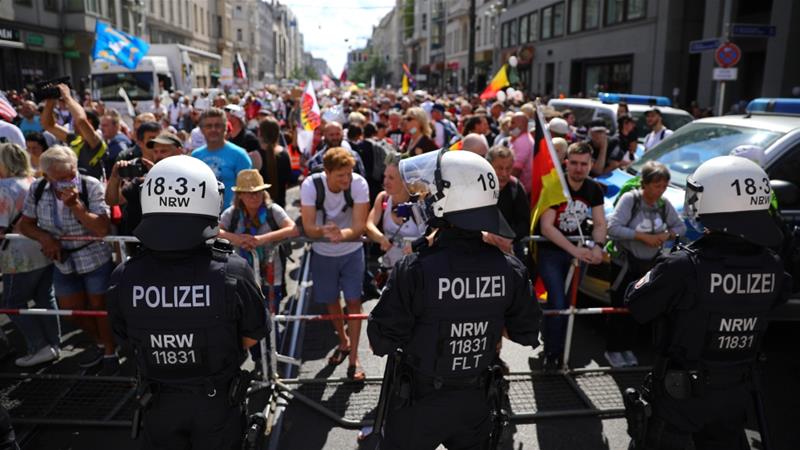 Police in the German capital have ordered the dispersal of tens of thousands of protesters demonstrating against coronavirus restrictions after many marchers failed to keep social distancing or wear masks.

Hundreds of people continued to gather at Berlin’s iconic Brandenburg Gate on Saturday, in a show of defiance against the police orders, with clashes reported from some parts of the city.

“Unfortunately, we have no other option,” Berlin police said on Twitter, referring to their order. “All the measures taken so far have not led to compliance with the conditions.”

A police spokesman said the protesters were dispersing peacefully, though there were also reports on social media of sporadic disturbances, such as a construction container fire and blocked roads.

Police said at least two people have been arrested after bottles and rocks were thrown at them.

Al Jazeera’s Dominic Kane, reporting from Berlin, said the main protest has not been officially called off yet, but police have urged organisers to disperse as they believe that social distancing rules were not being observed.

Those protesting were people who “don’t like having to wear masks, whether in public places … or inside in closed spaces,” Kane said.

Protesters carried a wide range of grievances and banners proclaiming their opposition to vaccinations, face masks and the German government in general.

Some among the crowd waved American, Russian or German Reich flags, while several protesters wore clothing with white nationalist slogans and neo-Nazi insignia.

But most participants denied having far-right views.

Berlin police, who deployed 3,000 officers to control the crowds estimated at 18,000, had been preparing for possible violence as activists opposed to the virus measures urged social media followers across Europe to arm themselves and gather in Berlin.

Earlier this week, the city banned the protest but a German regional court overnight gave the final go-ahead by overruling the earlier decision.

Activists, angered by the city’s attempt to ban their protest after demonstrators at a previous rally failed to wear masks or socially distance, flooded the city with thousands of applications for additional protests.

Until now, Germany has managed the coronavirus crisis better than many of its European counterparts, with rigorous testing helping to hold down infections and deaths.

The country has reported more than 240,000 cases and nearly 9,400 deaths so far. But new daily infections have accelerated in recent weeks, as in much of the world.

On Friday, Chancellor Angela Merkel urged the citizens to keep up their guard against the virus.

“This is a serious matter, as serious as it’s ever been, and you need to carry on taking it seriously,” she said.