WASHINGTON — Senator Bernie Sanders on Thursday will release a $16.3 trillion blueprint to fight climate change, the latest and most expensive proposal from the field of Democratic presidential candidates aimed at reining in planet-warming greenhouse gases.

Mr. Sanders’s proposal comes one day after Gov. Jay Inslee of Washington, who made climate change the central focus of his campaign, announced he was dropping out of the 2020 race. Mr. Inslee’s absence could create an opening for another presidential aspirant to seize the mantle of “climate candidate.”

Mr. Sanders was an early supporter of the Green New Deal, an ambitious but nonbinding congressional plan for tackling global warming and economic inequality. He is bestowing that same name upon his new plan, which calls for the United States to eliminate fossil fuel use by 2050.

Mr. Sanders said in an interview Wednesday night that his proposal would “pay for itself” over 15 years and create 20 million jobs in the process.

There is no broadly agreed-upon figure of how much needs to be spent to decarbonize the United States economy, but one study estimated that as much as $4.5 trillion could be needed just to modernize the nation’s power grid.

Mr. Sanders’s plan would be funded in part by imposing new fees and taxes on the fossil fuel industry. He described the proposal as putting “meat on the bones” of the Green New Deal resolution and laying the groundwork for a rapid energy transformation.

“I have seven grandchildren, and I’m going to be damned if I’m going to leave them a planet that is unhealthy and uninhabitable,” he added.

The proposal comes as 10 Democratic candidates prepare to discuss climate change at a CNN forum dedicated to the topic on Sept. 4. The candidates will not debate one another during the event, but will instead make back-to-back appearances.

Democratic voters are increasingly demanding that candidates show they are prepared to be ambitious in tackling climate change. A recent Yale University survey found that 93 percent of party voters supported an aggressive plan like the Green New Deal.

United Nations scientists have urged a deadline of achieving net-zero global emissions — that is, eliminating as much greenhouse gas pollution from the atmosphere as humans generate — by 2050. That would stave off the worst consequences of climate change like rising seas, longer droughts and worsened heat waves, experts say.

Virtually all of the Democratic candidates for president have pointed to that deadline as a critical one, and those with specific plans have used it as a broad benchmark. The majority of them also sidestep contentious ideas like a tax on carbon pollution and instead call for a vast infusion of money toward clean energy research and development.

Mr. Sanders’s plan is no exception. Though the Vermont lawmaker was an early proponent of a carbon tax — he once called it “the most straightforward and efficient strategy for quickly reducing greenhouse gas emissions” — his new proposal makes no mention of one.

Instead, he calls for converting the electricity and transportation sectors to 100 percent renewable energy by 2030 and achieving “complete decarbonization” by 2050 through a massive spending plan.

“You’ll see Bernie setting the pace. He’ll be the one who is always prepared to go the furthest,” Mr. Hockett said.

Joshua Freed, vice president for clean energy at the centrist Democratic think tank Third Way, said he was not impressed with Mr. Sanders’ plan. The proposal opposes nuclear energy and carbon capture and storage technology, both of which Mr. Freed said must be tools in decarbonizing the economy.

“The Sanders plan appears to be big, but it’s not serious,” Mr. Freed said. “We need to have every option on the table.”

The Sanders plan calls for a moratorium on nuclear power plant license renewals, and it says that the goal of 100 percent sustainable energy “will not rely on any false solutions like nuclear, geoengineering, carbon capture and sequestration, or trash incinerators.”

Mr. Sanders’s campaign estimated that roughly $3.1 trillion would be generated from “making the fossil fuel industry pay for their pollution” through new but unspecified fees and eliminating $15 billion in annual subsidies; another $1.2 trillion would come from “scaling back military spending on the global oil supply,” and $2.3 trillion would be collected from new income tax revenues from new jobs in the renewable energy industry, among other measures.

The spending would go toward researching energy storage and electric vehicles, supporting small farms and developing ways to “make our plastic more sustainable through advanced chemistry.” Under the plan, the federal government would also provide five years of unemployment insurance, a wage guarantee, housing assistance and job training to “any displaced worker” in the fossil fuel industry. 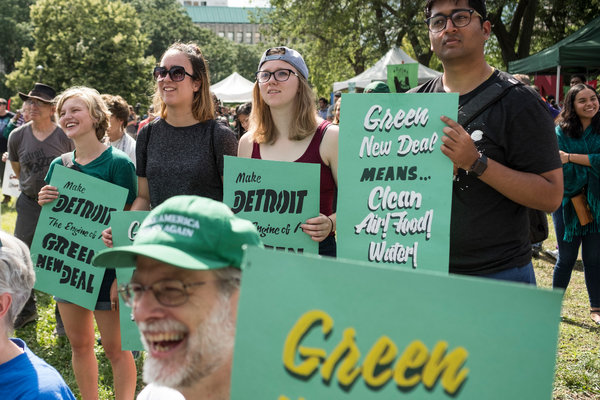 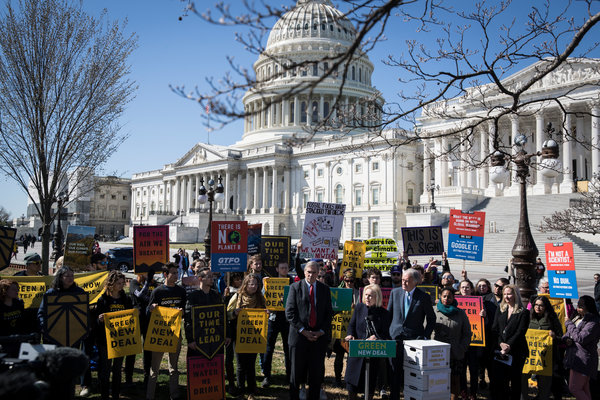 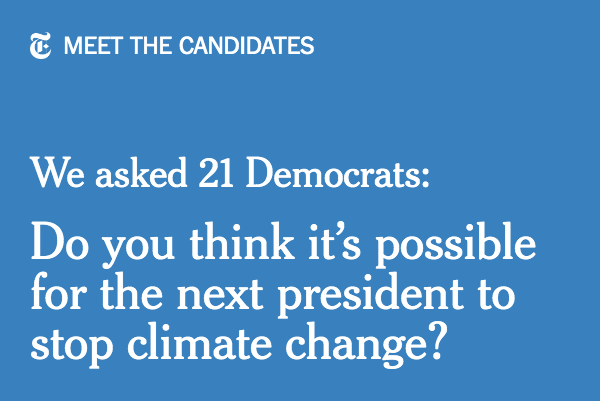 Lisa Friedman reports on climate and environmental policy in Washington. A former editor at Climatewire, she has covered nine international climate talks. @LFFriedman