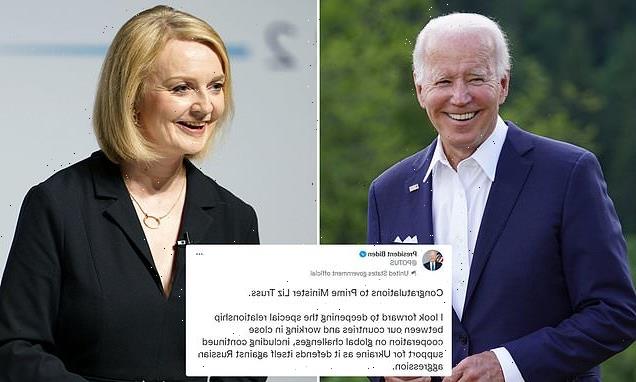 Biden congratulates Liz Truss on becoming British Prime Minister and will call her TODAY: Hopes support of Ukraine – but sets up a showdown on Northern Ireland

President Joe Biden on Tuesday congratulated Liz Truss on becoming British prime minister and will call her later in the day.

Biden and Truss will speak at 3:30 pm Washington time, which is 8:30 London time, the president told reporters at the White House.

‘I’m looking forward to it. I’m going to talk to her about a lot of things,’ he said.

Earlier he had offered his congratulations, saying he looked forward to deepening the ‘special relationship’ between the US and UK.

‘Congratulations to Prime Minister Liz Truss. I look forward to deepening the special relationship between our countries and working in close cooperation on global challenges, including continued support for Ukraine as it defends itself against Russian aggression,’ Biden wrote on Twitter.

Truss, the head of Britain’s Conservative Party, is said to be less keen on the ‘special relationship’ with the US than some of her predecessors. In the past she has called it ‘special, but not exclusive.’

The White House wouldn’t preview what Biden and Truss will discuss. The two leaders could have a face-to-face meeting later this month when both are in New York for the annual UN General Assembly meeting.

‘He’s planning to call her to congratulate her, the new prime minister, and so that’s going to happen later this afternoon,’ White House press secretary Karine Jean-Pierre said at her daily press briefing. 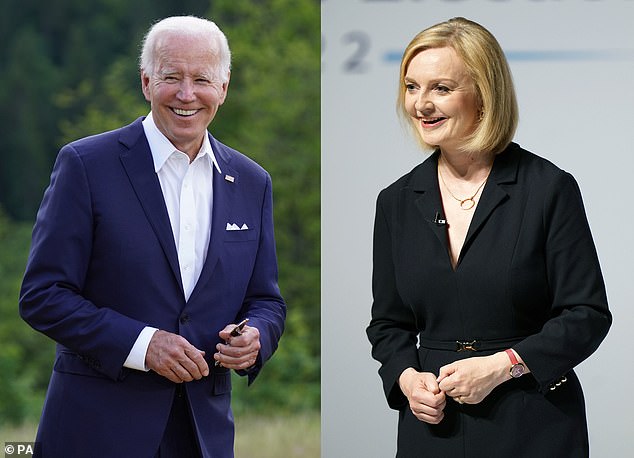 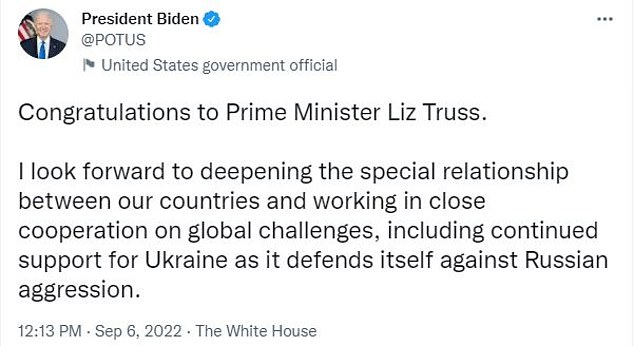 Biden and Truss have met before. She, in her role of foreign secretary, accompanied then-Prime Minister Boris Johnson on his visit to the White House last September. She and Biden also talked when he attended the COP26 conference in Scotland last October.

Jean-Pierre also wouldn’t say if Biden would discuss the situation in Northern Ireland during the call, a topic that is expected to be a tense one between the two leaders.

Administration officials are worried Truss could upend the post-Brexit trade agreements in Northern Ireland – a move that would then threaten the 1998 Good Friday peace deal that ended three decades of conflict.

To keep the land border between the two open, customs checks are done on goods being moved to and from the mainland UK.

U.K. leaders want to renegotiate this deal because, they claim, it erodes the standing of Northern Ireland within the U.K.

Truss is one of the agreements fiercest critics and has publicly committed to push legislation that would give ministers the power to unilaterally suspend parts of the Northern Ireland Protocol through Parliament.

Biden, who is proud of his Irish heritage, strongly opposed Brexit and has expressed great concern over the future of Northern Ireland.

Jean-Pierre declined to say if the president would broach the topic on the call.

‘I’m not going to get ahead or speak to what the President might say,’ she said. ‘But he has been clear about his continued interest in Northern Ireland. Our priority remains protecting the gains of the Belfast Good Friday Agreement and preserving peace, stability and prosperity for the people of Northern Ireland. Again, I’m not I’m not going to get ahead of what the President will say.’ 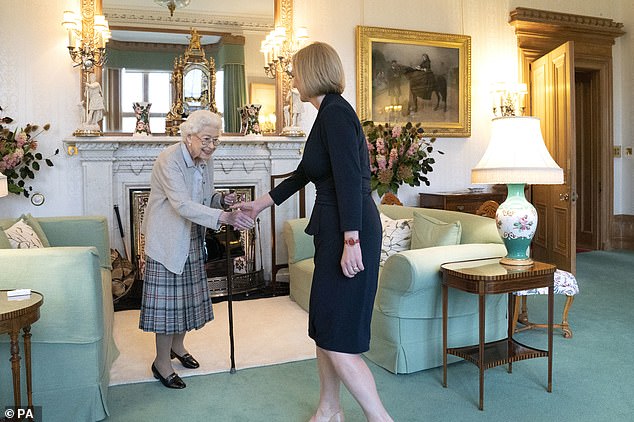 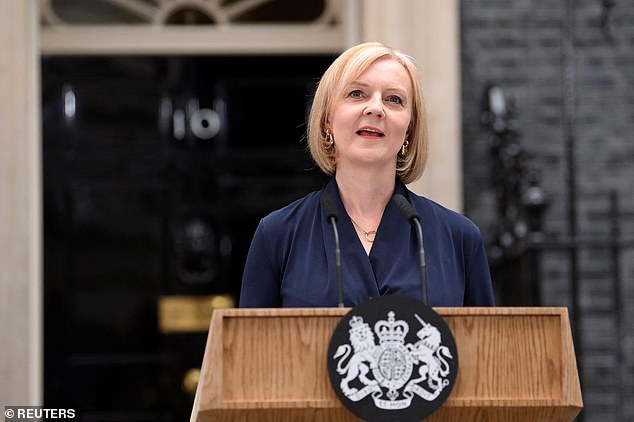 Truss formally replaced Johnson as prime minister on Tuesday after meeting with the Queen at Balmoral and being formally asked by HM to form a government.

In her first remarks as PM, Truss vowed to deal with Britain’s energy crisis.

‘I’m confident that together we can ride out the storm, we can rebuild our economy and we can become the modern brilliant Britain that I know we can be,’ she said.

Truss is planning to freeze household energy bills at near the current level this winter using government-backed loans to energy suppliers, according to reports.

Energy bills are due to soar next month as winter approaches and European nations are struggling to wean themselves off of Russian energy sources as a consequence of President Vladimir Putin’s invasion of the Ukraine.

‘I will deal with the energy crisis caused by Putin’s war,’ Truss told reporters on the steps of 10 Downing Street.

‘I will take action this week to deal with energy bills and to secure our future energy supply,’ she said.

The situation in the UK is threatening a cost-of-living crisis for millions.

The White House blamed the crisis on Putin’s invasion of the Ukraine.

‘We see what Russia is doing and we’ve been very clear about this is that they’re using energy. They’re weaponizing energy,’ Jean-Pierre said, adding that ‘we’re working closely with our allies on this one.’

While the UK and US have been presenting a united front in response to Putin’s invasion of Ukraine, Truss has frustrated Biden officials at times.

Earlier this year, she said the UK and US must work together to create a Marshall Plan-style programme for Ukraine, echoing the one used to rebuild Europe after the Second World War.

But the speech ‘raised eyebrows’ among officials in the Biden administration, a US official told the Financial Times, because Washington has donated billions more in money and weaponry to Ukraine than the UK has.

Meanwhile, during a Conservative party conference last year, Truss said that the relationship between the US and UK was ‘special, but not exclusive’ while noting Britain has other allies such as Australia and India.

Adding to tensions, Truss insisted in October that a post-Brexit trade deal with the US is not the ‘be all and end all’ as she refused to commit to a pact being completed by 2030.

Truss said the UK has a ‘huge pipeline of deals’ ready for the coming months and told the US: ‘We are ready when you are ready.’

The White House has made clear a trade agreement with Britain is not an immediate priority for Biden, raising questions over the strength of the ‘Special Relationship’.

A trade deal with the US was billed by Brexiteers as one of the main prizes of leaving the EU. But talks have stalled after Biden became President. 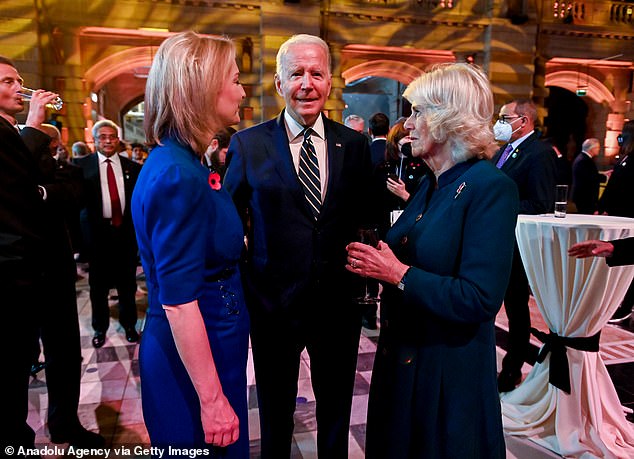 Liz Truss, then foreign secretary, met with President Joe Biden and Camillla, Duchess of Cornwall at a COP26 reception at the Kelvingrove Art Gallery in Glasgow on November 1, 2021

Truss did meet Biden during a September 2021 visit to the White House with Johnson.

She said of it at the time: ‘It was a very, very positive meeting. We talked about everything from trade to our security partnership to the future of the free world.

‘The great thing about Biden is he is a great Democrat and he has been very clear that he is going to fight for democracy, he wants to work to challenge authoritarian regimes.

‘That hour and a half meeting I think showed the depth of our relationship but also his determination to do that.’