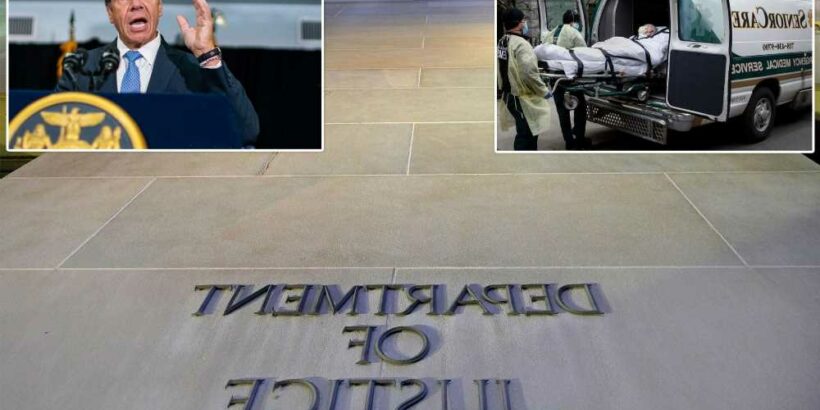 The righteous NIMBYs: Besieged by disorder and failing pols

The Department of Justice has decided not to investigate whether the civil rights of residents in New York’s government-run nursing homes were violated by Gov. Andrew Cuomo’s controversial admission policy related to the COVID-19 pandemic.

In a letter Friday, the DOJ’s Office of Legislative Affairs told US Rep. Steve Scalise (R-La.), ranking member of that House Subcommittee on the Coronavirus Crisis, that New York was off the hook in connection with potential violations of the Civil Rights of Institutionalized Persons Act.

In August, the DOJ’s Civil Rights Division requested information from New York in connection with a March 25, 2020, order from the state Department of Health that required nursing homes to admit “medically stable” COVID-19 patients discharged from hospitals.

It also sought records from Pennsylvania, Michigan and New Jersey, which adopted similar rules that the DOJ said “may have resulted in the deaths of thousands of elderly nursing home residents.”

“We have reviewed the information provided by these states along with additional information available to the Department,” Deputy Assistant Attorney General Joe Gaeta wrote Friday.

“Based on that review, we have decided not to open a CRIPA investigation of any public nursing facility within New York, Pennsylvania, or Michigan at this time.”

In a prepared statement, Scalise called it “outrageous that the Department of Justice refuses to investigate the deadly ‘must admit’ orders issued by governors in New York, Pennsylvania, and Michigan that resulted in the deaths of thousands of senior citizens.”

“Where is the justice for nursing home victims and their grieving families? These deadly orders contradicted the [Centers for Disease Control and Prevention’s] guidance, and needlessly endangered the most vulnerable among us to the deadly COVID-19 virus,” Scalise said.

“Even worse, Governor Cuomo in New York intentionally tried to cover up the true death toll resulting from his mandate. Grieving families deserve answers and accountability. It’s unconscionable that Biden’s Department of Justice refuses to investigate the deadly actions that went against CDC’s medical guidance taken in these states.”

Cuomo is still facing a potentially more serious probe by the FBI and the Brooklyn US Attorney’s Office that was sparked by The Post’s revelation that a top aide privately admitted that administration covered up the total number of nursing home residents killed by the coronavirus.

US Rep. Elise Stefanik (R-Glens Falls) said, “This decision from President Biden’s Department of Justice makes President Biden complicit in the criminal corruption scandal and coverup of deaths of thousands of vulnerable seniors.”

“New Yorkers deserve answers and accountability. I was the first member of Congress to call for an investigation into Governor Cuomo’s corrupt criminal coverup and I will continue to fight for the families who lost loved ones because of the cruelty and corruption of our Governor,” she added.

Haydee Pabey, whose mom died of COVID-19 in a northern Manhattan nursing home, said. “My heart is broken all over again.”

“I do believe this is political. Biden doesn’t want to shed a negative light on Cuomo, the Democrats and the Democratic Party. He’s trying to sweep this under the rug.”

And Vivian Zayas, whose mom, Ana, died after contracting COVID in Long Island nursing home after recovering from knee surgery, said: “I’m sick to my stomach. We’re in disbelief. Cuomo’s mandate caused a wildfire and thousands of deaths of nursing home residents.”

“Biden is covering up for Cuomo and other Democratic governors who followed his lead. Imagine if Trump did this? It’s a shame that this is partisan and grieving families are caught in a partisan game. It’s a partisan cover up. Who do we turn to now?! No one is curious about thousands of vulnerable elderly people died of COVID through no fault of their own.”

But Assemblyman Ron Kim (D-Queens), whose uncle died in a nursing home after suffering symptoms of COVID-19, said, “I think it’s too premature to conclude that the Biden administration is letting Cuomo off the hook.”

“I think closing this one investigation doesn’t mean there weren’t any wrongdoings in these facilities and also wrongdoings by this administration at the state level.”

In addition to the August request, the DOJ in October requested information from New York and New Jersey about their total numbers of nursing home deaths.

Meanwhile, the Cuomo administration was stonewalling lawmakers, reporters and others who were also seeking the data.

Melissa DeRosa, one of the governor’s top aides, later privately apologized to Democratic legislators for withholding the information during a Feb. 11 video conference call.

A recording of the call, obtained by The Post, revealed that DeRosa said Cuomo’s administration feared the numbers would “be used against us” by the DOJ.

DeRosa also said it appeared the feds had “dropped” the matter.

It’s unclear whether the DOJ is still reviewing whatever information it received in response to its October request, but Cuomo’s administration has acknowledged being under investigation by the FBI and the Brooklyn US Attorney’s Office.

That probe involves both Cuomo’s handling of nursing homes amid the coronavirus crisis and his $5.1 million deal for his pandemic memoir, according to state Senate Health Committee Chairman Gustavo Rivera (D-The Bronx), who was interviewed by federal authorities in May.

Cuomo’s administration hasn’t received formal notification regarding Friday’s letter to Scalise but was told by DOJ that it’s not being investigated in connection with about 30 public nursing homes, according to a source familiar with the matter.