Joe Biden says ‘I trust vaccines. I trust the scientists, but I DON’T trust Donald Trump – and the American people can’t either’ as he demands ‘transparency’ on White House vaccine plan

Democratic nominee Joe Biden demanded ‘transparency’ from President Donald Trump in developing and distributing a coronavirus vaccine, as the White House has continued to push that one would be available to every American by the end of the year.

‘So let me be clear, I trust vaccines. I trust the scientists. But I don’t trust Donald Trump – and the American people can’t either,’ Biden said during a brief speech Wednesday afternoon from Wilmington, Delaware’s Queen theater.

Biden floated that Trump could be fast-tracking a vaccine to help his re-election chances, noting that ‘scientific breakthroughs don’t care about calendars any more than the virus does.’ 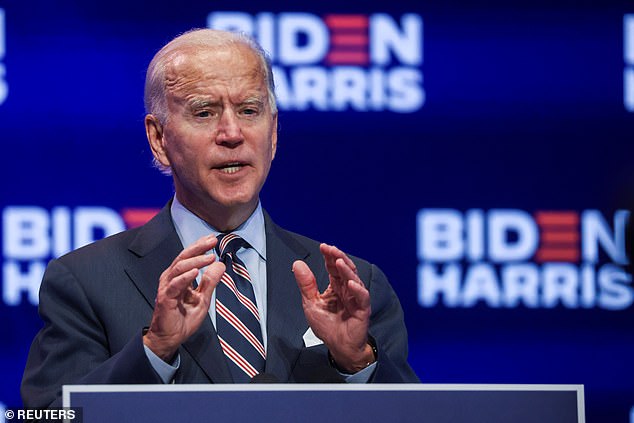 Democratic nominee Joe Biden demanded ‘transparency’ in the development and the distribution of a coronavirus vaccine saying Wednesday: ‘I trust vaccines. I trust the scientists. But I don’t trust Donald Trump – and the American people can’t either’ 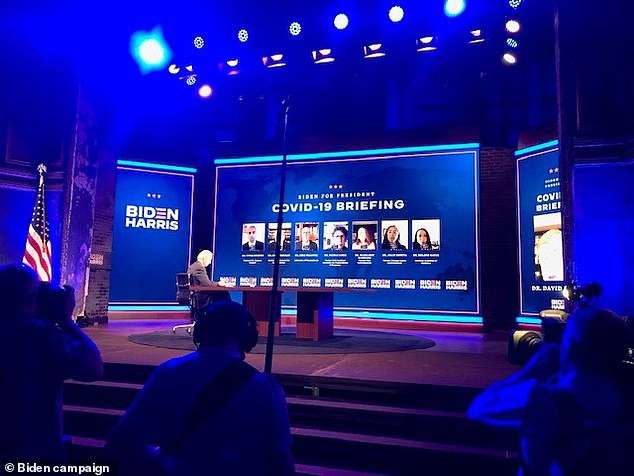 Earlier, Joe Biden participated in a briefing with medical experts on the theater’s stage and sat silently listening when reporters were led in 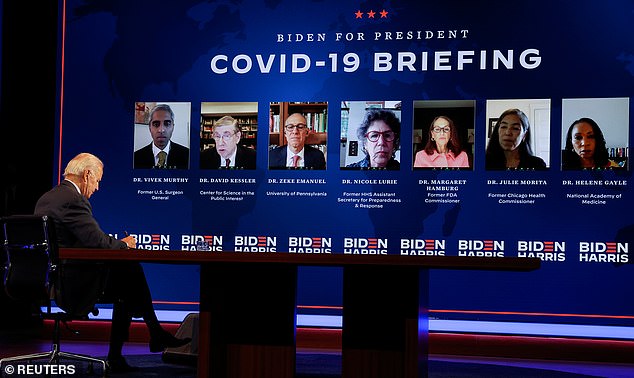 ‘And their timing, their approval, and their distribution should never, ever be distorted by political considerations. They should be determined by science and safety alone,’ he added.

Biden laid out criteria in which he would be comfortable seeing Americans take a Trump-backed vaccine.

‘If Donald Trump can give honest answers to these questions – the American people should have the confidence and transparency they need to trust a vaccine and adopt it in numbers that make a difference,’ Biden said.

He then went through his list, being guided by a teleprompter and only addressing a small group of reporters, masked-up and socially distanced through the room.

Biden first wanted to know what criteria would be used to ‘ensure that a vaccine meets the scientific standard of safety and effectiveness.’

Secondly, the ex-veep asked, ‘who will validate that the decision was driven by science rather than politics?’

He suggested some kind of scientific governing board could to the trick.

Finally, he wanted to know how distribution of the vaccine would be done ‘safely, cost-free and without a hint of favoritism.’

Biden took several questions at the end of his scripted remarks, to a few chosen networks.

He was asked if his message should be interpreted as: don’t trust the president, trust me if I’m elected.

Biden answered in the negative.

Biden added that if scientists say a vaccine is good to go under Trump’s watch than he would ‘absolutely’ say ‘do it.’

Biden also noted that he was worried about political influence on some individuals working at Health and Human Services and the Centers for Disease Control and Prevention.

‘I don’t trust some of the people like the fellow who just took a leave of absence from the DCD, he didn’t run it, he was a spokesperson,’ the Democratic nominee said.

He was speaking about Michael Caputo, the Trump appointee who took leave after he said on Facebook live that political opponents ‘are going to have to kill me’ and Democrats are plotting an armed insurrection.

Biden encouraged Americans to look toward science – and pointed to Trump’s track record on the subject.

Earlier on Capitol Hill, Centers for Disease Control and Prevention Director Dr. Robert Redfield testified that mask-wearing continues to be the ‘most important, powerful public health tool’ in stopping the spread of COVID-19′

‘I might even go so far as to say that this face mask is more guaranteed to protect me against COVID than when I take a COVID vaccine,’ Redfield testified before the Senate.

Biden made a point about that too, ridiculing a comment Trump made Tuesday night at the ABC News town hall about why the president was skeptical of mask-wearing.

He said because waiters don’t like them, waiters touch food and touch the mask,’ Biden scoffed. ‘Come on.’

Redfield also testified that while first responders may have access to a vaccine in November or December of 2020, most Americans wouldn’t get it until the ‘second or third quarter’ of 2021 – meaning a full year from now.

‘We do believe that it will be widely available by the end of the year,’ the press secretary said.