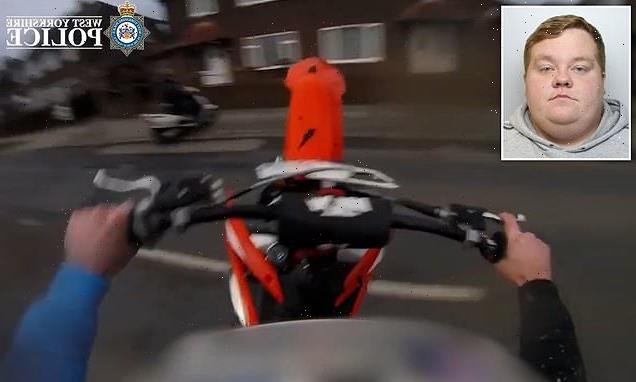 Members of a bike gang who videoed themselves going on two rides, including an 18-mile rampage, have been sentenced after police used the online footage to track them down.

Shocking footage recorded by one of the hooligans showed the thugs zipping across the roads with little regard to other motorists.

The video started with the eleven-member mob speeding on city roads, pulling stunts in the middle of the road and jumping red lights.

The gang – some on quad bikes – were erratically weaving among the traffic, pulling out in front of oncoming traffic and driving on pavements. 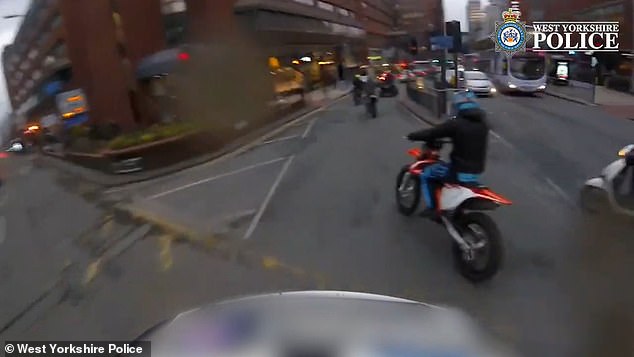 Some eleven members of a motorcycle gang terrorised members of the public in Leeds and Wakefield, West Yorkshire in March 2018. Members of the gang have been jailed while others have been handed non-custodial sentences following a court case last Friday 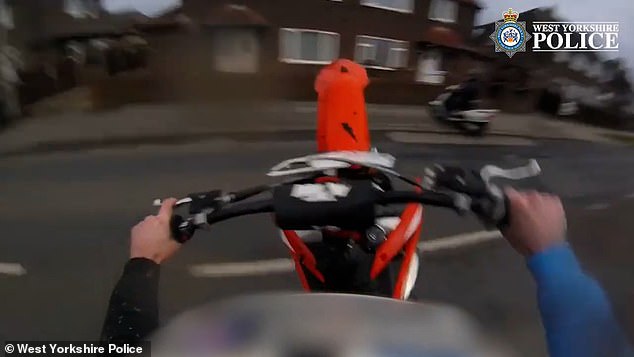 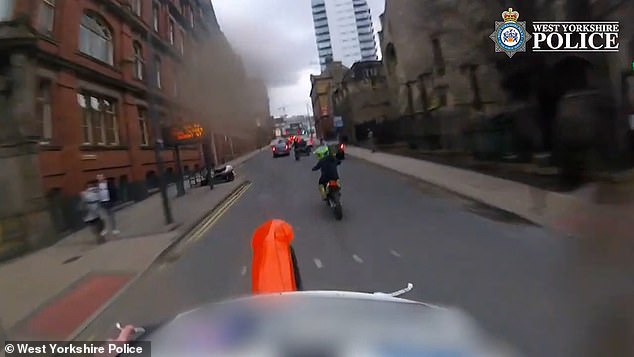 In one instance they went the opposite direction on a roundabout inches away from other motorists.

The footage was posted on YouTube under the username Timmy Mallet, who was later identified as Terrence Barker.

The incidents happened in Leeds and Wakefield, West Yorkshire on March 24 and March 25, 2018.

On the Saturday, the gang started in Middleton, before travelling through Beeston, Holbeck and into the city centre before returning to Middleton, through Hunslet and Belle Island.

The following day, the gang went on a route which included Lofthouse, Outwood, Wakefield city centre, Lupset, Horbury, Horbury Bridge, and Grange Moor, before coming to a stop near Kirkheaton, Huddersfield.

According to West Yorkshire Police: ‘Along the 18-mile journey that spanned three districts, the riders could be seen riding dangerously and anti-socially through traffic, including accelerating in the middle of the road, pulling wheelies, going through red lights and riding on pavements.’

Specialist officers from Leeds studied the footage to gather evidence against various members of the gang.

They then combined this with their local knowledge of those known to be involved in the anti-social use of motorbikes.

This led to seven warrants being issued at the suspects’ addresses and at a container yard.

Items of clothing worn in the footage were seized along with a large number of motorbikes and quad bikes stored at the container yard.

Seven defendants were charged with causing a public nuisance and pleaded guilty to the offence. 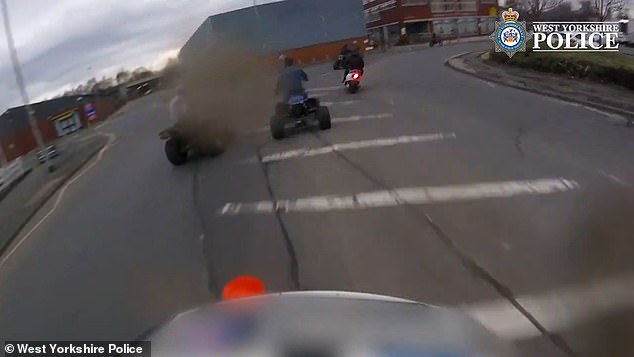 Six were sentenced at Leeds crown court on Friday, December 10.

Five of the men were convicted over their part in both incidents:

Daniel Brook, 24, of Middleton, was jailed for two years and nine months for his part in both incidents, as well as for separate offences including possession of Class A drugs with intent to supply, dangerous driving, actual bodily harm, racially aggravated behaviour and driving while disqualified and with no insurance. 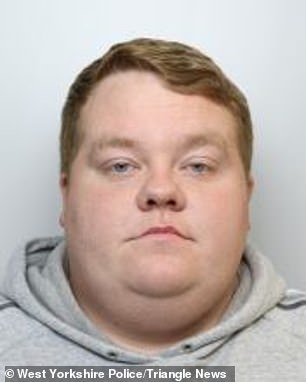 Daniel Brook, 24, of Middleton, was jailed for two years and nine months for his part in both incidents

He was also subject to a two year driving disqualification.

Robert Addinall, 30, of, Belle Isle, received a nine-month prison term, which will run alongside a sentence he is currently serving for offences connected to bringing drugs and weapons into prison, plus 10 months for the second count, which will run consecutively.

He was also disqualified from driving for a year and a half from his release date.

Damien Morgan, 28, of Middleton, was given an eight-month jail term that will run consecutively to one he is currently serving for drug supply.

He will also be banned from driving for a year upon release.

Terrence Barker, 29, of Middleton, was given suspended concurrent sentences of nine months and 11 months for both counts.

He was banned from driving for a year and a half and ordered to undertake 100 hours of unpaid work.

Brandon Parkin, 21, of Leeds, was given a six-month suspended sentence, 15 Rehabilitation Activity Requirement days, 40 hours of unpaid work, a driving disqualification for a year and ordered to pay £500 costs.

Aiden Bedford, 32, of Middleton, was convicted of involvement in the second incident.

He received an eight-month prison sentence and will be banned from driving for 14 months upon release.

A seventh defendant was dealt with at youth court for his involvement in the second incident. 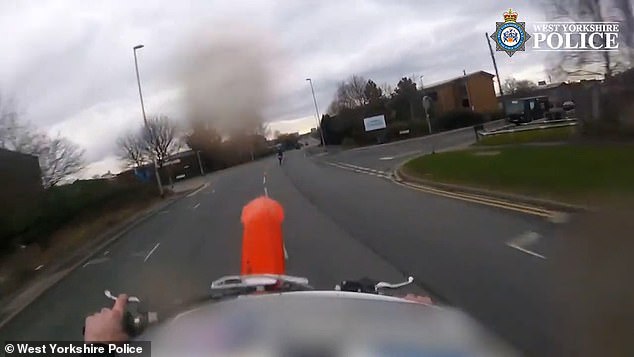 Chief Insp Kev Pickles, heads Policing for Leeds District, said: ‘The dangerous and anti-social behaviour of those who took part in these so-called ‘ride outs’ was completely unacceptable’

Their seized bikes and equipment, which have been held in storage for the last three years, were made the subject of a deprivation order.

Chief Insp Kev Pickles, heads Policing for Leeds District, said: ‘The dangerous and anti-social behaviour of those who took part in these so-called ‘ride outs’ was completely unacceptable.

‘Both incidents happened over significant distances on public roads in busy urban areas at a weekend and put people’s safety at risk and unnecessarily caused fear to members of the public who encountered them.

‘We can never allow this kind of illegal activity that impacts on people’s lives to go unchallenged and we will always look to identify and take robust action against those involved. 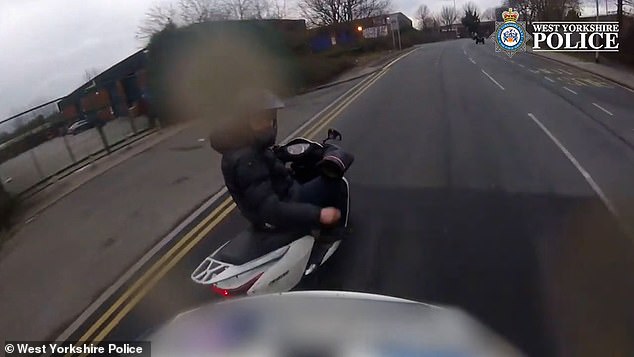 Daniel Brook, 24, of Middleton, was jailed for two years and nine months for his part in both incidents

‘As a result of some painstaking investigate work by officers from the Leeds South Neighbourhood Policing Team, the majority of those who took part were identified and charged.

‘They have now had to face the consequences of their actions, and we hope this successful outcome will provide some reassurance to our communities and also send a clear deterrent message to those who unwisely choose to involve themselves in incidents like this.

‘The anti-social use of motorbikes is an issue that we continue to work closely alongside our partner agencies to address.

‘We have specialist off-road bike officers who patrol hotspot areas to support the work of local neighbourhood officers and we regularly seize bikes and issue warning notices as well as taking other enforcement action in conjunction with Leeds Anti-Social Behaviour Team.

‘We also work with schools and other young people’s organisations to raise awareness of the risks this activity creates for both the riders and members of the public.

‘We encourage people to report any incidents, particularly if they have specific information about known individuals who are involved, so that we can take appropriate action.’